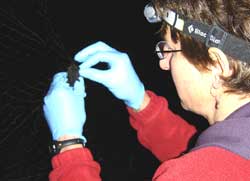 Wildlife biologist Karen Blejwas disentangels a bat from the mist net. The bat in the Table of Contents photo has a small transmitter glued to her back.

In the headlamp beam, the little bat squeaking in the mist net looked like a winged shrew with big ears. State wildlife biologist Karen Blejwas explained the chittering squeaks were distress cries. The calls sometimes draw in more bats, but in mid-October in Southeast Alaska most bats have already migrated to wherever they go to hibernate.

It was the last night of bat trapping for the year. Blejwas and I had strung the mist net between two tall poles a couple hours earlier at dusk. In the dark, the net was an invisible wall almost 30 feet high and 30 feet wide. Such nets are commonly used to capture birds for banding projects and they work well for bats. This was the first and only bat of the night, a far cry from the night in early June when Blejwas and her colleagues hit the bat jackpot.

“We caught 85 bats our first night trapping here at Fish Creek and we could’ve easily caught a couple hundred,” she said. “They were all little brown bats.”

That aptly named species is pretty common in Alaska in the summer, but virtually disappears in winter. It’s the most widespread bat in North America, and the only species found in interior Alaska, although four other bats species are found in Southeast. Blejwas and her colleagues spent six nights trapping in the spring and six nights in the fall, and caught two of those - Keen’s Myotis and California myotis – and she’s detected silver-haired bats. The long-legged myotis, has only been found on Prince of Wales, Wrangell, and Admiralty islands.

Blejwas pulled on surgical gloves and carefully extracted the little bat, a young female probably born this spring. She was weighed, measured and sampled, and Blejwas carefully shaved a small patch of bat fur and glued an aspirin-sized transmitter to her back before she was released. Researchers are trying to better understand the timing of migration and hibernation, and learn where Alaska’s bats hibernate.

The tiny radio tag is quite limited in range and lifespan. Only one radio-tagged bat was detectable on this night in the vicinity of Fish Creek – the others were out of range or the batteries had already died. I asked Blejwas about the ideal tool for this work.

Not all bats leave Southeast Alaska for the winter.

“We had three passive monitors out last winter and we did get some calls every month,” she added. “There were not a lot in December, January, or February, but we do know that some bats are here in the winter.”

Those passive monitors are bat detectors, devices that allow us to hear and record bat calls. Bat detectors transform the frequency of bats’ ultrasonic calls, which are octaves above the range of human hearing, and make them audible as clicks and buzzes. As in radar and sonar, bats make sounds that bounce back from surroundings, which they process and interpret, creating a “picture” of the environment. Bats aren’t blind, but depend on their hearing to “see” their environment and their prey as they fly at night. Flying through trees requires a series of steady clicks. Catching a flying insect requires a rapid burst of clicks, known as a feeding buzz. 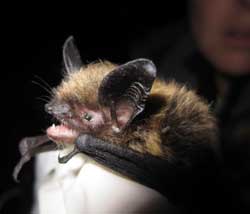 A little brown bat in Alaska. In the east , some caves are “hibernacula” for tens of thousands of bats. But in the west, the same species don’t appear to hibernate in caves in large numbers. A survey in Oregon and Washington found that most caves contained no hibernating bats. They’re likely using other types of roosts - snags, rock crevices, tree cavities and houses. In the Pacific Northwest some species of bats stay active all winter, as long as there is food.

Some detectors offer a graphic display, a picture of the sound called a sonogram. Blejwas is using detectors for passive and active surveys – active involving a person walking trails; passive meaning the device is left out to record.

Blejwas has a dozen passive detectors set up in the Juneau area, where these detectors have recorded calls and logged activity since last spring. They’ve revealed some important information.

“In mid-April to mid-May, the detectors picked up a pulse of high activity here at Fish Creek,” she said. “It appears to be migrants showing up in the spring. Then starting in late September we got another pulse of activity. The timing suggests it’s associated with some migratory activity.”

“That was a real highlight, seeing those pulses in spring and fall,” she said. “It’s the first real evidence we have for bat migration in Southeast Alaska.

The detectors are doing more than revealing the bats’ presence. Some bats can be identified by their calls.

“The silver-haired bats have a call signature that is identifiable, a lower frequency,” she said. “All of our detectors except for the one out at Cowee Meadow have picked up at least one silver haired bat, so they are a lot more widespread than I thought. We almost caught one while trapping at Fish Creek, we could hear it on the detector while we were trapping.”

She said the same species of bat will also have different calls in different parts of their range. Blejwas carefully recorded the calls of the bats she captured this year. “The primary purpose of the spring trapping was to obtain reference calls for known species,” she said. “We’re building a reference library of calls of northern region bats – we’re working with Canadian researchers as well. They’ve found that little brown bats in the Yukon make calls that are lower frequency than the calls little browns make further south.”

“Now we have over 100 calls, mostly little brown bats,” she said. “At some point I’d like to move our capture efforts to Prince of Wales Island. Keen’s is more abundant further south, as are all the other species, and there is just greater diversity.”

This summer, as the passive detectors sat listening for bats, Blejwas, her colleagues and a team of volunteer citizen scientists and students hiked the nighttime trails in the Juneau area with bat detectors and GPS units in hand. About 135 surveys were conducted. 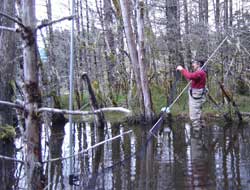 Blejwas sets a mist net above the shallow water of a cove on Fish Creek pond.

“Kristin Brunk selected four high-use trails where we saw lots of bats, and she found that activity changed over the course of the month,” she said. “She was trying to see if that was related to a change in the abundance or types of insects.”

Brunk netted, trapped, collected and identified thousands of insects. She did not find a correlation - it appears that insect abundance may be high enough everywhere she sampled that no matter where the bats were foraging, they find enough prey.

One reason for the increased interest in bats is a bat epidemic called white nose syndrome. The disease has killed more than a million bats since it was first discovered in New York State in 2006. It’s spread to a number of Eastern states and Canadian provinces, and some Midwestern states. Little brown bats are especially hard hit. White Nose is caused by a fungus that is often visible as a white fuzz around the muzzle.

“They’re not really sure how the fungus is killing the bats, but they think it might irritate their skin, causing them to rouse too frequently and for too long in the winter time, so they burn up all their energy and they basically starve to death,” Blejwas said. “Sick bats are found often outside the caves in winter. You find a lot of dead bats around the entrance, or really sick bats.

White nose syndrome still hasn’t reached western states, but people are concerned. The fungus afflicts cave-hibernating bats in the east , and some caves are “hibernacula” for tens of thousands of bats, making them particularly vulnerable to infection. But in the west, the same species don’t appear to hibernate in caves, or at least not in large numbers. A survey of more than 650 caves and mines in Oregon and Washington found that most caves contained no hibernating bats. The largest number found in any one cave was 64, and the second highest was just 32. Most of the other 24 sites with bats had just a single bat. Biologists assume they’re using other types of roosts in winter - snags, rock crevices, tree cavities and houses. In the Pacific Northwest some species of bats stay active all winter, as long as there is food.

“In Oregon and Washington many bats don't really hibernate all winter,” Blejwas said. “They go into torpor during the severe part of winter, but since there is insect activity in winter, they’ll forage when conditions allow.”

The Wildlife Diversity Program with the Alaska Department of Fish and Game will continue learning about bats in Alaska. State biologists Dave Tessler and Marian Snively have also been studying bats in Southcentral Alaska, and projects will continue next year.

“Thanks to the acoustic monitoring and radiotelemetry work this past year we’ve learned a lot about seasonal activity patterns and the timing of migration,” Blejwas said. “Next year we hope to learn where they go when they migrate and what types of roosts they’re using for hibernation. There are still a lot of unknowns about bats in Alaska.”