Copper River Reds on the Run 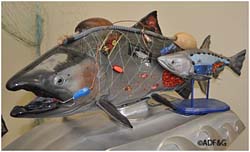 The King of the River with the new sockeye sister, The Copper River Queen.

ADF&G staff continue to celebrate the success of Alaska’s sustainable fisheries in our unique “Wild Salmon” style, of course.

The “Copper River Queen” is the second sculpture of its kind created by Katie Sechrist, Division of Commercial Fisheries Information Officer with the Alaska Department of Fish and Game in Anchorage. In 2009, the sculpture “Copper KR” (“King of the River”) was spawned to life by Katie with the help of Ken Marsh, Division of Sport Fish Information Officer, and Greg Landeis of Black Spruce Art in Soldotna. The fish art was created as part of Anchorage’s Wild Salmon on Parade community program and in celebration of Alaska’s 50th anniversary of statehood.

Going into its third year, Copper River Reds on the Run has produced fourteen one-of-a-kind salmon art sculptures that have decorated storefronts in Cordova throughout the busy summer tourist season and has generated over $8,000 for scholarship programs to benefit youth throughout the Copper River watershed. 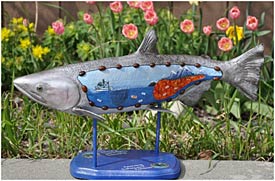 In 2011, the program was expanded to feature the full Copper River salmon run – king, sockeye, and coho salmon in both male and female forms. A total of six molds were distributed to lucky artists – two king, two sockeye, and two coho.

A panel of judges chooses six artists based on applications and sketches that are submitted in early winter. Designs are selected based on artistic merit and creativity.

As with the original design that Katie had hoped to create for her first fish, the queen was spawned to life using a variety of new and recycled materials. Paint, mesh netting, epoxy, glass and wood beads were used to depict an artistic representation of the salmon life cycle, as well as present-day commercial fisheries in Prince William Sound. Each side portrays a hand painted, picturesque summer fishing scene typically found in Prince William Sound, a gillnet vessel on one side and purse seine vessel on the other, surrounded by glass fish and a sparkling glass egg skein.

All of the elaborately hand decorated salmon were turned in to the Copper River/Prince William Sound Marketing Association by artists at the beginning of May. The fish were “released” into the community at the annual First Fish celebration in Cordova on May 12th, which coincides with the opening day of Alaska’s first and one of the most famous commercial salmon fisheries, the gillnet fishery on the Copper River flats. 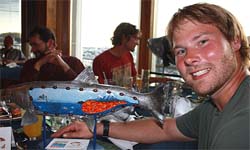 Prince William Sound gillnetter and seiner Derek Blake of Anchorage was the lucky high bidder and bought the queen.

The fancy fish were displayed indoors around town at Cordova businesses until the end of their run when they were rounded up and sold at a live auction at the Copper River Highliner dinner on July 22nd. The Queen spent her summer gracing the front window of the local ADF&G office in Cordova surrounded by her fishy family.

Tickets for the dinner sold out so fast that visitors to Cordava with the Commercial Fisheries Division were unable to attend. Prince William Sound gillnetter and seiner Derek Blake of Anchorage was the lucky high bidder and bought the queen for a steal of $300. Organizers thanked artists stating that the dinner was a huge success, raising $6,285 for scholarships. Katie was proud to have represented the department by participating in this event and helping to provide education opportunities for local students and possibly the next generation of fisheries biologists.