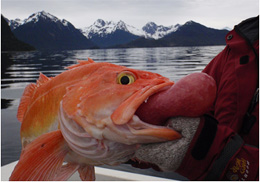 Rockfish have a “closed” swim bladder which results in their inability to quickly regulate swim bladder pressure. The expansion of swim bladder gases can force the stomach outside of the mouth. A new, simple method of returning fish to depth really helps survival of released fish.

Rockfish are an amazingly diverse group of fish: scientists currently know of 102 species of rockfish with more than 30 species found in the Gulf of Alaska. Rockfish occupy nearly every type of marine habitat including shallow intertidal areas, deep-sea trenches, and broad mud flats – not just in rocky habitat as their name implies. Ranging in color from dull gray to vibrant orange and red, rockfish are as pleasing to the eye as they are to the taste buds.

They are targeted by commercial and recreational fisherman alike and are often captured incidentally in other fisheries (e.g., halibut fishery). Many species of rockfish, including yelloweye, are extremely long-lived, and many do not reach sexual maturity until they are well into their twenties. When you add to this high site fidelity and sporadic recruitment, it becomes apparent why the sustainable management of rockfish populations can be so difficult. In fact, over-fishing has led to the depleted status of some rockfish stocks (e.g., yelloweye) from southern California to British Columbia, and has contributed to the recent listing of the Puget Sound/Georgia Basin population segments of yelloweye and canary rockfish as threatened, and bocaccio as endangered under the Endangered Species Act.

Management of rockfish in Alaska has taken on a variety forms but at present recreational fisheries in southcentral Alaska are managed with what are thought to be conservative bag limits – bag limits that are small enough to prevent anglers from targeting rockfish yet large enough to allow retention of rockfish that are caught incidentally while targeting other species. In addition to low bag limits the Alaska Department of Fish and Game Division of Sport Fish has attempted to limit discarding of rockfish in recreational fisheries by encouraging anglers to avoid catching rockfish and to relocate if they begin to unintentionally catch rockfish. Despite low bag limits and a message that encourages avoidance, rockfish harvest in recreational fisheries across the state continues to increase and nearly half of all rockfish caught are released.

Rockfish have a “closed” swim bladder which results in their inability to quickly regulate swim bladder pressure. When they are brought to the surface from depths greater than 90 feet, many suffer physical injury and behavioral impairment (called barotrauma) due to rapid expansion of gases within the swim bladder. The rapid expansion of swim bladder gases often forces the stomach outside of the mouth, tears the swim bladder, and forces gas into other body cavities such as the eye socket. It can also create embolisms in vital organs such as the heart and kidney. Fish with inflated swim bladders often cannot submerge back to depth after being released which leads to high release mortality for species such as yelloweye. 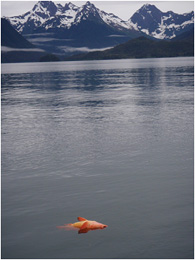 Fish with inflated swim bladders often cannot submerge back to depth after being released which leads to high release mortality. A simple method of returning fish to the bottom vastly increases survival of released fish.

Barochamber studies conducted in Oregon found that quickly recompressing rockfish (returning them to the pressure they were at prior being subjected to rapid decompression) reversed many of the external signs of barotrauma and under laboratory conditions survival of recompressed individuals was as high as 96%. This study, in conjunction with no-retention regulations for several species of rockfish, led the Oregon Department Fish and Wildlife and the California Department of Fish and Game to encourage deepwater release (use of a device that sends a rockfish back to capture depth, and thus to the pressure at the time of capture) of all released rockfish.

Prior to promoting deepwater release in Alaska, ADF&G desired estimates of survival that were derived from studies conducted in wild settings where individuals were exposed to all sources of mortality (e.g., predation), and were released with devices that are available to the angling public. Towards this end the Division of Sport Fish embarked on a research project from 2008-2010 that aimed to determine the effectiveness of deepwater release at improving the survival of released yelloweye rockfish. 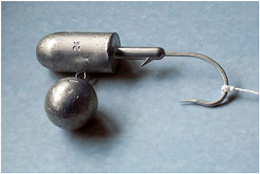 Capture histories for these individuals were then used in statistical models to generate estimates of survival and to explore the effects of barotrauma, capture depth, and individual size on the survival of fish released at depth. The project concluded that regardless of external barotrauma signs and capture depth, yelloweye rockfish had remarkably high survival (98%) if they were released at the depth of capture within a couple minutes of reaching the surface. Conversely, the study found that only 22% of yelloweye that were released at the water’s surface were able to submerge to depth.

In light of these findings ADF&G has added deepwater release to the list of “best practices” for anglers to employ in order to minimize release mortality of rockfish caught in recreational fisheries. If deepwater release becomes widely implemented in the state’s recreational fisheries, release mortality of rockfish, and total rockfish removals each year could be dramatically reduced.

A manuscript covering the ADF&G mark-recapture project has been accepted for publication in North American Journal of Fisheries Management and will be available later this winter. More information on rockfish conservation and deepwater release is available on the ADF&G website.
http://www.adfg.alaska.gov/index.cfm?adfg=fishingSportFishingInfo.rockfishconservation

See the accompanying article for more on deepwater release of rockfish.

Sam Hochhalter is a fishery biologist (assistant area management biologist) for the division of sport fish. His area of operation is Prince William Sound.