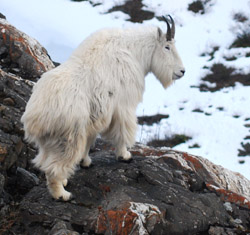 Teaching hunters to distinguish billies from nannies - and to take billies and leave the nannies for breeding - is a high priority for mountain goat mangers in Alaska and elsewhere. Kevin White photo.

Mountain goats are tricky. Nannies and billies look so similar that hunters have difficulty telling them apart, which makes wildlife management challenging. They are very difficult to hunt, but they are vulnerable to overhunting. Mountain goats are native only to western North America and inhabit some of the most inaccessible terrain imaginable, so they have not been well studied. But that’s changing.

Biologists are using helicopters to monitor and survey goat populations and GPS collars to track their movements, offering insight into the size and use of their home ranges. A new and better understanding of these animals’ vulnerabilities is emerging.

Phil Mooney is responsible for managing the mountain goats on Baranof Island in Southeast Alaska. The goat population on Baranof has declined 42 percent in recent years, from a high of about 1,500. Hard winters and hunting have both been factors. The harvest of nannies is of particular concern. They produce the young that are recruited into the population, enabling it to grow.

“Research shows that when a population is in decline, if you continue to harvest nannies, and especially older nannies, you can lose the whole population,” Mooney said. “Since the average age of breeding females is four, and some females don’t breed until they are five or even six, you lose a lot of your recruitment.”

Helicopters are the mountain goat surveyors’ best friend, and in mid-August Mooney flew the ridges of Baranof Island near Sitka to count mountain goats. The adults and kids were on ledges and on cliff faces between 3,800 and 4,500 feet in elevation. He counted 259 goats, about 220 fewer than that same area in 2004. There were about 16 kids per 100 adults, down from 22 per 100 adults in 2004. Mooney said that’s not a bad ratio of kids to adults, but it’s not a sign the population is growing.

“We are not seeing an expanding population, we’re seeing a decline,” he said. “We’re looking for a sign the decline has halted, and so far, we haven’t seen that yet.”

Sometimes there is no halt in the decline. State wildlife biologist Neil Barten saw a situation in the Yakutat area that Mooney hopes to avoid on Baranof. A combination of unexpectedly heavy hunting pressure and illegal hunting in the late 1990s on Nunatak Bench near Yakutat hammered the goat population. Barten closed the season to assess the situation. In just a few years the number of goats in that population dropped from 82 in 2000 to fewer than 30, and that is absent hunting pressure.

“The population has just tanked and it’s not showing signs of recovering,” Barten said. “They just killed so many of the reproductive females that the population can’t recover. There are so few breeding individuals left; they can’t keep up with winter mortality and predation.”

Mooney said the goat population on Baranof Island was growing in the late 1990s and early this century, and seemed to be able to sustain a fairly high harvest. Between 1995 and 2011, 744 goats were harvested – about 40 percent nannies.

“We’ve hit nannies pretty hard for the past 16 years,” he said. “We had an expanding population and the average age of the harvested nannies was 3 years of age, and that’s the only way we could have handled that.”

Hunters are required to bring in the horns of harvested goats in so state biologists can determine age and gender, and lately Mooney has seen a disturbing trend on Baranof Island. The nannies harvested in 2010 averaged 6.1 years of age.

“The age of the nannies was going up,” he said. “People were taking older nannies, generally meaning you don’t have the young ones out there. They’re taking the breeding crop.”

To reflect the biological impact of taking females, the current management system assigns points to goats; a nanny is worth two and a billy one. The quota for 2010 on Baranof was 56 points or 18 females, whichever came first. The harvest was 18 goats; 12 billies and 6 nannies. 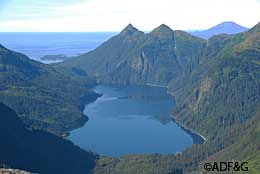 Blue Lake on Baranof Island is fairly accessible to hunters from Sitka, and concern about the high harvest of nannies has led wildlife mangers to close the area to goat hunting this year.

“Our quota for the whole island for this season is eight nannies, and/or 43 billies” Mooney said. “So far only four goats have been harvested this season since Aug. 1, and all four goats taken were nannies.”

Mooney wants to provide hunters with the opportunity to take billies, but needs to protect the overall population. On Baranof Island, he’s able to close certain watersheds where he’s concerned about the goats, and he’s closed hunting this year in several popular areas close to Sitka, the Blue Lake –Medvejie Lake watersheds and the South Fork of Katlian River.

The latest research shows those goats are even more vulnerable than biologists had realized. Last year 12 goats in the Blue Lake area were equipped with GPS tracking collars, providing insight into where the goats are on a daily basis , how much they move during summer and winter, and how much they roam during breeding season. It’s not far.

“The goats have very small home ranges, about two square miles for young males and females,” Mooney said. “One nanny had an extremely small home range – all the points were within two miles. If that area is accessible to hunters, it increases her vulnerability to hunters and makes it likely she’ll be taken.”

Researchers found the male goats moved a bit further during the breeding season, about nine miles. The big question is where the recruitment is coming from. Goats in adjacent areas that are just too steep and inaccessible to hunters may be re-stocking the goats taken from accessible areas.

“Of those goats we saw in the survey (in August) 80 percent you couldn’t get to, they are high and inaccessible on cliff faces,” Mooney said. “We only saw five goats below 3,800 feet.”

One of the 12 collared goats was lost to natural mortality this spring, and researchers hope to deploy seven to 10 more collars this fall on Baranof goats. That will provide a better picture. But there is no question that taking fewer nannies would help.

The ideal management tool would be to restrict hunters to taking only billy goats. One billy can impregnate many nannies, and protecting nannies means more kids. But the difficulty in distinguishing nannies from billies makes that impractical.

“My original intention was billies only, but it’s hard to enforce,” Mooney said. “A hunter accidently shoots a nanny, they’re supposed to skin it out, butcher it and haul the meat back to town, where they forfeit the goat, pay a fine and possibly forfeit their hunting rifle. Or they just kick it over a cliff and keep going and shoots another.”

“Nowhere in the state do we have a billy only hunt,” Barten said. “We have a hard enough time getting people to shoot a full curl ram or a 50-inch moose.”

Barten’s examples speak to the requirement that hunters are required to carefully examine some game animals to be sure they are legal to take. Fish and Game is trying to help hunters distinguish billies from nannies, and has produced a self-quiz and a guide booklet and a website loaded with pictures and tips. Hunters are required to look over the material, but passing the quiz is not yet a requirement.

Alaska is not alone in efforts to direct hunters toward billies. Oregon has 600 to 700 mountain goats in eight hunting units, and permits are limited and coveted. Only 10 goat tags are awarded each year, and a person may draw only one goat tag in a lifetime. About 10,000 hunters apply each year for a once-in-a-lifetime chance to hunt an Oregon mountain goat. Hunters must attend a required orientation class with the local biologist before the hunt, and check in after the hunt. Don South, a member of the Oregon Foundation for Wild Sheep, teaches goat orientation workshops.

“The only reason the goat is orientation is mandatory is so hunters don’t shoot a nanny,” he said. It seems to work. “I don’t think a single nanny was taken last year.” 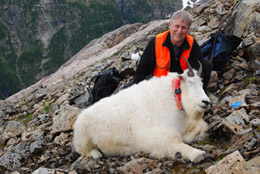 Wildlife biologist Phil Mooney with a mountain goat collared in Septmeber 2010. The GPS collars have provided a wealth of information on goats' home ranges and seasonal movements.

“Most non-residents are looking for bigger horns, a bigger body, and they take more time because they are paying for it,” Mooney said. “Nonresident always have guides, either registered guides or next of kin. Residents tend to do a goat hunt over a weekend and shoot the first goat they see. They’re mostly meat hunters.”

Biologist Thomas McDonough manages mountain goats on the Kenai Peninsula, where a new idea has been implemented to address the issue. If a nanny is taken the hunter keeps it, but doesn’t hunt goats on the Kenai again for five years. It’s not a serious penalty, as they can hunt elsewhere in Alaska, but it’s a discouragement that doesn’t invite cheating. Kenai hunters have supported the move.

“The response was positive from the people I spoke to, even the people who mistakenly took a nanny and were done on the Kenai for five years, they were still positive,” McDonough said.

McDonough has had two complete years to evaluate the restriction, and is now part way into the third season. Results have been mixed. The previous average take was about 36 percent nannies, about 1/3, and the first year first year that decreased to fewer than 30 percent.

“That was encouraging,” McDonough said. “We didn’t think it would drop to zero, but a drop from a third to a quarter would've been good. Then last year we had one of the highest proportions of nannies in the harvest in 20 years. I think weather was a confounding action, affecting goat movements and hunter access. Hunters had way more access to nannies last year. This year, it’s preliminary, but it looks like the nanny take is down. When dust settles in a few years, I hope the overall proportion will drop to a quarter.”

Like Oregon, goat hunting on the Kenai is a drawing or lottery – although the odds a little better – and that offers managers a better opportunity to focus on the hunters.

“The next step I'd like to take is that hunters who won a drawing permit go online and pass a test, the ID test in the booklet,” McDonough said. “That at least guarantees they looked at the booklet.”

McDonough appreciates his colleague Phil Mooney’s assessment that resident hunters are spending less time afield than nonresidents, but thinks with education they could still take billies and not nannies.

“I think there are a large number of hunters who will take the first animal they see, but generally that’s a nanny group. Those nanny groups tend to be in more accessible locations at lower elevations,” he said. “The biggest animal in that group will be an adult nanny, but in the group there will likely be a few one- and two-year-old billies, and if they focus in on their identification they could take those young billies. Keeping those nannies on the mountain is what we need.”

Riley Woodford is a writer and producer for the Division of Wildlife Conservation and the editor of Alaska Fish and Wildlife News.