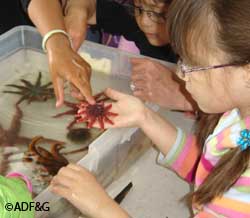 Examining sea stars in the touch tanks at BioBlitz 2011. These marine invertebrates were collected in Auke Bay.

Most of the scientists preparing for the Southeast Alaska Bioblitz 2011 wore binoculars or hand lenses around their necks, indicating their preferences for making small things large or far things close. Kitty LaBounty had both, but still felt a little underequipped.

“I usually have two hand lenses, a 10-power and a 20-power,” she said. A botanist from Sitka, LaBounty helped survey plants, fungi and lichens. She was among more than two dozen visiting scientists that flew to Juneau from Washington, Oregon, British Columbia and elsewhere in Alaska to participate in the 24-hour survey June 18 and 19 of all life in the Auke Bay area north of Juneau.

The public also participated in the event as “citizen scientists,” and Saturday’s activities brought dozens of kids to BioBlitz. Some went on surveys while others enjoyed the sea cucumbers, chitins, hermit crabs and sea stars in the touch tanks at BioBlitz headquarters on the University of Alaska campus. Papermaking, nature-oriented crafts and other activities were a draw, as well as presentations on hummingbirds, nature photography, worms, owls and bats. Not surprising, bugs were a big hit with kids.

The earth worm presentation provided some surprises. There are 16 earthworms found in Alaska, and 15 are considered exotic. Many have been introduced by anglers – fishermen can buy worms in bait shops, and often discard leftover bait – many of the introduced worms are found near boat ramps. Worms are also introduced when bulldozers, backhoes and other types of heavy equipment are shipped from down-south projects to Alaska; eggs in soil smashed into tire treads are deposited when the equipment begins working in Alaska. Fortunately, worms don’t travel very far from the point of introduction. Alaska’s only indigenous earthworm is found only Prince of Wales Island – but perhaps a future BioBlitz will reveal other locations.

Throughout Saturday afternoon surveys teams returned to the campus base, delivering insects, plants, fungi and lichens to be identified. Biologists with microscopes, hand lenses, guides and keys worked with students and members of the public to key out the many species. 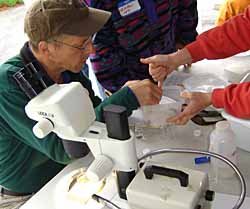 Sunday morning Juneau naturalist Bob Armstrong spearheaded a survey to Portland Island, just outside Auke Bay. “I wanted to document what is going on out there,” Armstrong said. He’s has been studying oystercatchers on the island for years, and wanted a better inventory of a variety of Portland Island’s life. Birds, mammals, plants, lichens, and terrestrial invertebrates were surveyed.

Arctic terns were beginning to nest on the island, and at least 80 arctic terns were counted. Biologists speculated that nesting efforts may have begun earlier in June and been demolished by high tides, and the terns were beginning a second attempt. Oystercatchers had already nested and fledged young were seen – although it’s an accomplishment to see an oystercatcher chick. “They are so camouflaged,” Armstrong said. “They freeze and blend right in with the rocks.”

Biologist Mike Goldstein and Armstrong saw an old acquaintance on the island, an oystercatcher Goldstein had captured and marked four years earlier. The bird had been equipped with a satellite transmitter, and the antennae sticking out his back was a good identifier. “He was a young stud when we first caught him,” Goldstein said. “Now he’s in his prime.”

“This is his fourth year back on the island,” Armstrong said. “He’s nested in almost exactly the same spot every time. He had a chick there with him this time. He’s the most aggressive oystercatcher on the island, he’ll come right up to you with that big antennae sticking out his back.”

Six oystercatchers were equipped with surgically implanted transmitters, which transmitted for about 18 months, revealing where the birds traveled that first winter. Goldstein said two went to The Brothers Islands, in Frederick Sound north of Petersburg, two went to southern Admiralty Island, one to Prince of Wales Island, and one clear down to Vancouver Island. 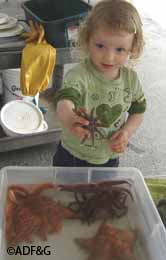 Two invasive plants were found on Portland Island, creeping buttercup and dandelion. The island is home to a delicate native orchid, commonly known as fairy slipper. Three mosses that had not been found anywhere else on Saturday were identified and documented on the island.

Karen Blejwas reported the Saturday night bat survey in the near-solstice twilight on the Auke Lake trail had been a success. “We started hearing bats right at the trailhead, and we got to see them, too,” she said.

The underwater video shot by divers Saturday under Auke Bay was shown on Sunday, featuring sea stars, sculpin, sea cucumbers, urchins, hermit crabs, yellowfin sole and scallops. The classroom was a flurry of activity as biologists worked diligently throughout the morning and afternoon to key out specimens. Aquatic insects swam in small fish tanks and Petri dishes, plants, lichens and mosses were spread out over tables, and the tally grew. At one point someone pointed out that one small plastic bag contained more than 100 species of insects.

That number is likely to grow. Last year, work continued in the days following the event to finish indentifying species, mainly insects and invertebrates, and more than 100 species were added to the tentative final count. Biologists guessed that the final count for the Auke Lake area BioBlitz could range between 960 and perhaps 1,010.