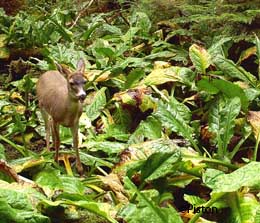 A Sitka black-tailed deer in a patch of skunk cabbage on Rivellagigedo Island. This is one of a series of 15 images captured in the summer of 2010 by a remote motion-triggered trail camera.

Sitka black-tailed deer are big fans of Southeast Alaska’s ubiquitous skunk cabbage, especially in early spring. A new series of pictures in the ADF&G trail camera gallery shows a patch of skunk cabbage throughout the entire summer and the deer that visit day and night.

Joseph Piston contributed the images, all taken from a single location on Rivellagigedo Island in southern Southeast Alaska between June 20, 2010 and Sept. 18, 2010, nicely bracketing the summer season. Young spike bucks in velvet, does with fawns, and mature bucks are all captured.

Had Piston set is camera up a couple months earlier, in addition to documenting the monumental growth of this distinctive plant, it’s likely he’d have photographed bears and even more deer. In April, when the pointy green buds of skunk cabbage first emerge from underground tubers, they generate heat, sufficient to melt snow and thaw the soil. Hungry deer nip off the top couple inches of the spiky buds and bears emerging from hibernation dig up and eat the skunk cabbage roots. 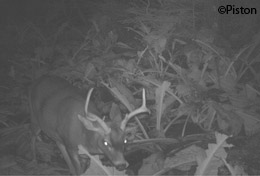 A nice buck photographed in late summer. At night this Bushnell camera uses an array of infra-red LEDs to capture images in black and white.

Skunk cabbage is one of the first plants to bloom in the spring. The blooms are unusual - a bright yellow leaf-like petal called a spaeth shrouds the spadix, a yellow stalk covered in tiny, stinky flowers. Skunk cabbage is well-named, the flowers emit a strong skunky smell which attracts flies and beetles, insects more accustomed to scavenging, pressed into service here as pollinators.

Skunk cabbage contains calcium oxalate crystals, which renders the plant inedible to people. It’s not exactly poisonous, but akin to chewing a mouthful of stinging nettles. In spite of this, it’s very popular with deer as it is rich in protein and nutritious. Deer can tolerate the acidic crystals, probably because they have tough mouths – they eat devil’s club leaves as well – and they eat a varied diet, which tends to buffer and balance out the noxious or somewhat toxic components. 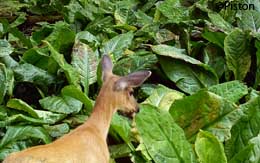 A doe surveys the cabbage patch.

The final frames in the series show the skunk cabbage patch almost completely consumed, although the foragers have left the center ribs of most of the leaves.

All 15 images can be viewed at: http://www.adfg.alaska.gov/index.cfm?adfg=viewing.trailcams

About the Trail Camera Gallery:

The images were all taken by remote, motion-triggered cameras. Some images have been contributed by scientists, others by the public. For more information on trail cameras, see: http://www.adfg.alaska.gov/index.cfm?adfg=wildlifenews.view_article&articles_id=499&issue_id=96.
To contribute images, contact Riley Woodford at riley.woodford@alaska.gov