BioBlitzing Alaska
Trio of Alaska BioBlitzes in Store for 2011 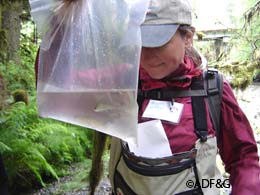 Assessing life on Earth in the 21st century is considerably less hazardous. This summer, Alaskans will focus on three areas for a trio of BioBlitzes – rapid and focused assessments of all life in a well-defined area. The Auke Bay area north of Juneau will be the location for the second annual Southeast BioBlitz June 18, a Kenai BioBlitz June 28 will look at a portion of the Kenai National Wildlife Refuge, and a Southcentral BioBlitz July 23 will focus on the Portage Valley.

Public involvement is key to the upcoming Southeast BioBlitz. Citizens will team up with botanists, wildlife biologists, entomologists and other specialists to survey the meadows, streams, forests, beaches and tidal areas. Family participation is encouraged, and participants of all ages can meet at the UAS campus at 1 pm Saturday to join survey teams, or drop in anytime Saturday afternoon or Sunday morning.

“Registration will open at 1:00, the opening ceremony is at 1:30 and we’re starting the surveys at 2:00,” said state biologist Karen Blejwas, one of the organizers. “Participants can pick whatever survey team they want to join. We’ve staggered them this year, some go out right at 2:00, some 2:45, and others at 3:30.” 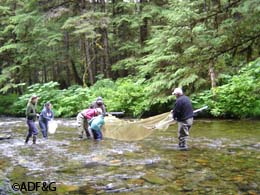 Seining in Fish Creek during the first Southeast Alaska BioBlitz in 2010. The Auke Bay area will be the focus of Southeast BioBlitz 2011.

By 2 pm on Sunday June 19, 2011, the survey teams will tally the species and produce a final count.

Cataloguing life is important, but the event is also a celebration of nature and the Southeast environment. Presentations on owls, oystercatchers, insects and other topics will be offered, as well as workshops on animal tracking, plant identification and wildlife photography. Touch tanks with sea creatures will be set up, microscopes will be available, and a variety of the plants, lichens, aquatic invertebrates and insects will be displayed as specialists identify the different species.

Tricorders and phasers will not be issued, but there is plenty of cool technology to supplement the seines, nets, minnow traps, live traps and dive bags used for collecting. Bat detectors, motion-triggered trail cameras, GPS/GIS units and data loggers will help document and record the presence of animals, and scuba gear will allow dive teams access to the subtidal areas.

State wildlife biologist Dave Tessler with the ADF&G Wildlife Diversity program is helping organize the first Southcentral BioBlitz, slated for July 23 at Portage Valley. Headquarters will be at the Begich-Boggs Visitor Center and the 24-hour event kicks off at noon. The Forest Service is a major partner, said Tessler, and the Chugach National Forest is a sponsor.

“It’s citizen science and we're inviting people to participate,” said Tessler. “There will be educational activities and presentations, and age appropriate activities for families with kids of almost any age.”

“We’re basically going to be looking back through time, along a path of glacial recession, that’s kind of our coordinating theme,” he said. “From the most recently de-glaciated areas at the toe of the glacier to the intertidal at Turnigan arm. We’ll be looking at how species occur in different habitats and how biodiversity is influenced on that gradient.” 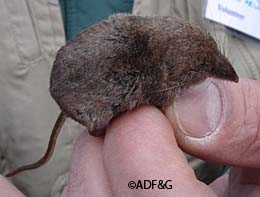 A shrew caught at the first Southeast BioBlitz.

The survey area includes a ridge around 1,200 feet in elevation, then down Portage Pass through the valley out to the sea.

Biologists working on the Kenai National Wildlife Refuge hope to learn more about the insects and terrestrial arthropods in the refuge and will host a BioBlitz from June 28 through July 1. Refuge entomologist Matt Bowser described it as more of a rapid ecological assessment; this will not involve the general public, but entomologists and students are invited to participate in the inventory work and collecting. According to Bowser, specimens will be collected to build a genetic library, a reference library of DNA barcodes associated with each species. To participate, please contact Matt Bowser at Matt_Bowser@fws.gov.

You can contact Southeast BioBlitz organizers at: ACRC@UAS.Alaska.edu, and more information is available at ACRC.Alaska.edu.

For information on the Southcentral BioBlitz see: www.chugachbioblitz2011.wordpress.com