Found Transmitter a Needle in a Haystack 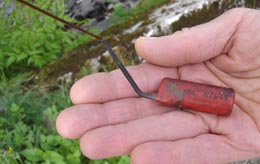 The transmitter found on the wetlands near Juneau had been surgically implanted in a scoter in 2001 in Southern B.C.

At first glance the radio transmitter looked like a firecracker with a long fuse. It was a lucky fluke, not a firecracker – that transmitter lying on the Mendenhall Wetlands near Juneau had been implanted in a sea duck ten years earlier and 900 miles south.

The transmitter was turned in to the Alaska Department of Fish and Game office in May. About the size of a double-A battery, it had HSL 67625 written on the side. A few e-mails to waterfowl biologists at ADF&G and the U.S. Fish and Wildlife Service turned up the transmitter’s story.

Because sea ducks cross state and international borders when migrating between summer nesting and winter feeding areas, sea duck biology is an international cooperative effort. The Canadian Wildlife Service, the U.S. Fish and Wildlife Service, the USGS, state agencies and universities work together. The Sea Duck Joint Venture is an international program bridging researchers. Tim Bowman of the USFWS in Anchorage is the U.S. Coordinator and he quickly located the biologist familiar with the lost and found transmitter: Dan Esler of the Centre for Wildlife Ecology at Simon Fraser University near Vancouver, BC.

“I probably touched that transmitter,” said Esler, who studies sea ducks and provided the history of the transmitter and its host.

Esler worked with a veterinarian who surgically implanted the transmitter in an adult male surf scoter on Dec. 20, 2001, near Deep Bay, on Vancouver Island, British Columbia. That’s in the Straits of Georgia, just north of Puget Sound and the U.S. Canada border.

Scoters are large black sea ducks that winter along the Pacific and Atlantic coasts and nest in the boreal forests of Alaska and Canada. On the east coast they are often called “coots.” Alaska is home to surf scoters and their close cousins, white winged scoters and black scoters. They group together in large rafts of hundreds or even thousands of ducks in the spring and fall.

Scoters are familiar birds to many coastal Alaskans, they’re known for those huge flocks and their synchronous feeding behavior. One edge of a scoter raft will dive and within a few seconds hundreds of birds are diving like falling dominoes, popping back to the surface 20 or 30 seconds later.

Blue mussels are a favorite food, as are snails and clams; they also eat crabs, urchins and marine worms. In summer, on the freshwater ponds and lakes where they nest and raise their young, they mainly eat aquatic insects and some pond vegetation.

“In Southeast Alaska their diet is almost exclusively blue mussels,” said Esler. “Different foods are important at different times of year in different parts of their range. Here in B.C. they have a different diet, all clams in the spring, and they switch to herring spawn when it’s available. We studied them down in Mexico and they mostly eat ghost shrimp, a burrowing shrimp. They’re following grey whales around as they muck things up and eating ghost and mud shrimp.”

Scoters nests are scattered over a vast area from eastern Interior Alaska across northern Canada, and for this reason, scoter nesting habits have been poorly understood and historically difficult to research. Implanted radio transmitters for ducks have contributed valuable insights in recent years.

One insight is that scoters and sea ducks exhibit site fidelity, a preference for and loyalty to specific areas.

“They come back to same general area - not only that, but certain birds are always found in certain bays, the same spot as in previous years,” Esler said. “That’s kind of the sea duck paradigm, they know what they like and they like what they know.”

At the same time Esler was studying Canadian scoters, ADF&G researcher Dan Rosenberg participated in a project very similar to Esler’s, tracking scoters wintering in the Juneau area. In February 2001 Rosenberg caught a female white-winged scoter in Auke Bay and equipped her with a transmitter. She wintered in the area and that May she flew about 1,000 miles due north and nested just east of the McKenzie River Delta in the Canadian Arctic. She returned to the Juneau area in early August.

Southeast Alaska is heavily used and important for migrating scoters, and tens of thousands of scoters can be found in Lynn Canal in the spring, especially upper Lynn Canal between Juneau and Haines.

Tools for tracking scoters include banding birds, which identifies individuals. This is very useful but requires recapturing the bird or recovering the band. VHF transmitters, such as the one found on the wetlands, allow a biologist with a radio receiver to locate the signal from the transmitter within about 20 kilometers, depending on the area and whether the biologist is in an airplane or on the ground.

“For VHF you must be there with a receiver and antennae, and you only hear where you listen,” Esler said. “On ground that’s five to 10 kilometers, in the air maybe 20 kilometers.” 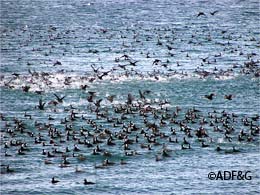 Satellite transmitters are a relatively new development, a sophisticated device that has tremendous advantages over the VHF transmitter. As with VHF transmitters, they’ve have become more powerful and smaller in recent years.

“A satellite transmitter will fit into a scoter no problem,” Esler said. “We’ve put them into a female Barrow goldeneye. It transmits to the satellite, and anywhere it goes in the world, we know. It tells us where the bird is.”

The found transmitter was part of two related research projects. The main objective was to look at the wintering ecology of scoters, especially as it relates to shellfish aquaculture and herring spawn. A secondary project compared the performance of several different kinds of transmitters.
“That proved to be the best model as far as what we were doing,” Esler said. “We've used it in lots of other applications.”

The transmitter has a nine-inch antennae that vertically sticks out of the scoter’s back near its tail when implanted. The antennae significantly improved transmission and did not contribute to any medical complications for the carrier duck.

“That model had a good size battery, and some we could hear multiple winters,” Esler said.

Earlier research indicated that by waiting until Dec. 20 to implant the transmitter, it was likely that the bird would winter in the vicinity and researchers would be able to continue monitoring it. That did not prove to be the case. After just five days researchers lost the signal. Either the transmitter failed or the bird was not established in the Deep Bay area and wintered elsewhere. Given scoters’ site fidelity and the lifespan of the transmitter’s battery, it’s possible that researchers could have heard the transmitter the following winter had the scoter returned. It may also have wintered regularly in a different area, such as Puget Sound, and been out of range.

The transmitter was in good shape when found, and doesn’t look like it has been lying outdoors for ten years. It’s possible it wasn’t there very long.

“Sea ducks in general are kind of long lived, and 10 or 12 years is not unreasonable,” Esler said. “The most likely scenario is the bird migrated up the coast, got nailed by an eagle as it went through and the eagle dropped the transmitter. And someone was lucky enough to stumble on it.”