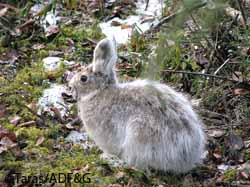 Does the abundance or absence of snowshoe hares affect Dall sheep and their predators in Interior Alaska? The connection between hares and Dall sheep seems unlikely, but it’s very real, and that connection is coyotes and golden eagles, for the most part.

Wildlife biologist Steve Arthur has been monitoring Dall sheep in the central Alaska Range since 1999. Arthur's research looks at how Dall sheep and their predators are affected by naturally occurring snowshoe hare population cycles.

His study area is just south of Fairbanks, in the central Alaska Range in Game Management Unit 20A. This is an area where Dall sheep populations declined by 60 percent from 1984 to 1994, during which time the snowshoe hare cycle peaked and then declined. Causes of the sheep decline are unknown, but managers at the time suspected that severe winter weather and predation from an increasing coyote population were factors. There are wolves and bears in Unit 20A, and coyotes are also present and have been since the early 1900s. Coyote abundance was greatly reduced during federal and state predator control programs from the 1940s through the 1960s. During the late 1980s, the coyote population began to increase.

Working with Laura Prugh, a doctoral student from the University of British Columbia, Arthur set out to track how changes in hare abundance affect levels of predation and survival of Dall sheep.

To estimate Dall sheep mortality and survival, Arthur radiocollared and monitored ewes and lambs during 1999–2005. Arthur found that the primary predators of Dall sheep lambs were coyotes and golden eagles, whereas wolves were more common predators of adult sheep.

"Although little is known about the population dynamics of coyotes and eagles in this region, studies in Kluane Park, Canada, and Denali National Park, Alaska suggest that both predators rely heavily on snowshoe hares as a major food source and reproductive success is positively correlated with the hare cycle," Arthur said. 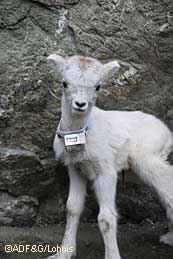 To determine snowshoe hare abundance, researchers used information gathered during annual hare counts. They used three methods during the annual counts: 1) roadside, 2) fecal pellets, and 3) live-trapping and marking. A roadside count needs to be conducted on the same stretch of road, during the same time of day, at the same time every year. Since 1995, while conducting annual bird counts, Delta Area Biologist Steve DuBois recorded snowshoe hare numbers along the Richardson Highway. This consistent, multi-year data set is valuable information to researchers looking at population levels. As part of her dissertation, Prugh conducted fecal pellet counts and live-trapping studies in Unit 20A, collecting fecal pellet data from nine areas with varying habitats. Live-trapping and ear-tagging snowshoe hares is the most labor intensive and expensive method. Researchers used the ratio of marked and unmarked recaptures to determine the population levels in the area.

Prugh also collected coyote scat to obtain coyote DNA data and estimate population levels in Unit 20A. Upon examination of the scat, Prugh was also able to gather information on coyote diets. Arthur radiocollared and monitored 15 adult coyotes in the study area. Coyote dens were checked for offspring to determine productivity levels. Like golden eagles, coyote productivity is linked to hare abundance in northern latitudes.

This research indicated that snowshoe hares make up more than half of the coyote's diet during the peak of the hare cycle. When hare populations crashed, coyotes ate more carrion and small rodents, but did not increase predation on sheep. Instead, the coyote population declined, and resident coyote pairs failed to produce pups during years when hares were scarce. Similarly, no successful golden eagle nests were found during the low point of the hare cycle. As a result, survival of Dall sheep lambs more than doubled when hares were scarce. 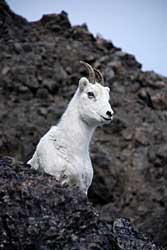 "This knowledge should help managers interpret results of periodic sheep population surveys and identify potential causes of population fluctuations," Arthur said.
Since the 1980s, sheep harvests in the Unit 20A study area have fluctuated along with the hare cycle, indicating that changes in lamb survival are large enough to affect abundance of adult rams years later. Only full-curl rams, rams with both horns broomed or broken, or those more than 8 years old can be harvested in Unit 20A. Harvest is an index of abundance; therefore, the Dall sheep harvest represents the survival of lambs born approximately 8 or 9 years earlier.

"Understanding the indirect effects of snowshoe hares on Dall sheep in Alaska is critical for managers to accurately predict how predators and their prey will respond to management actions," Arthur said.

Laura McCarthy is a publications technician working for Division of Wildlife Conservation in Fairbanks.