By Riley Woodford and Cathie Harms 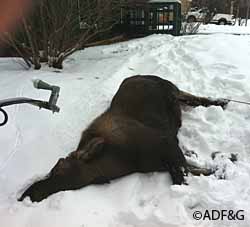 One of the victims of chokecherry poisoning.

Fragrant white blossoms cover the many ornamental chokecherry trees in Anchorage in the springtime. Also known as European bird cherry trees, these ornamentals have been introduced to Alaska. In summer the blossoms turn to berries that feed birds like Bohemian waxwings. The “chokecherries” are harmless to birds, but under certain condition, these plants can be poisonous to ruminants – animals like cattle, goats, deer and moose. This winter three calf moose were poisoned by these introduced and invasive chokecherry trees.

Many plants produce toxins, but they aren’t always poisonous. Some produce toxins at certain times of the years, some just in certain parts of the plant, and in some plants, only under certain conditions. When willows are browsed heavily, by animals or by insects, the plants produce tannins that make their leaves less digestible. It’s a defense against the browsers.

All chokecherry trees are “toxic” but not all parts, not all the time, and not to all species. The poisonous cyanide-producing compounds build up when the plants are grown under certain conditions such as in high nitrogen/low phosphorus soil, just before pollination or when the plant is damaged. Freezing, spraying with herbicides, pruning by homeowners or browsing by moose are all types of damage that stimulate the plant to produce more toxin. Toxins are concentrated in the leaves, seeds and buds at the tips of the branches, and in the winter, moose browse on twigs and stems of available plants. Around Anchorage, that includes introduced ornamentals like choke cherry trees.

Lab results confirmed that two calves died in January and a third in February after they ate recently frozen chokecherry buds, branches and berries. The third moose also ingested toxic amounts of introduced Japanese yew which also can cause sudden death. Yew is toxic at all times of year and is highly poisonous to people and pets as well.

Damage such as freezing causes a chemical called a cyanogenic glycoside to accumulate in the buds of chokecherry trees. The toxin builds up in parts of the plant prior to pollination and immediately after a freeze, but then decreases rapidly, within days. When the leaves, seeds or buds are chewed and swallowed, they react with chemicals in the rumen to release cyanide gas which can kill a moose as quickly as 20 minutes.

Commenting in mid-February on the deaths, State Wildlife Veterinarian Dr. Kimberlee Beckmen said. “Cyanide poisoning can occur from any shrub in the Prunus family, more commonly called ‘chokecherry,’ but it usually happens just after the first frost. It may be that recent warm spells in Anchorage followed by freezing temperatures led to these cases during mid winter.” 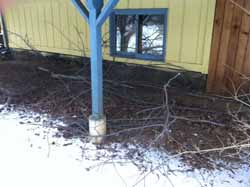 Hungry moose in winter may be attracted to ornamental urban trees, and even trimmed branches such as these stored under a porch.

Beckmen said it’s possible that moose may die every winter or spring from this kind of poisoning.

“When we get reports of moose calves that have died in towns and yards, typically it has been assumed they died from starvation, but these recent cases, which were not skinny, highlight the fact that is not necessarily the case and a full necropsy is needed to determine the cause of death,” Beckmen said.

A necropsy – an extensive examination of the dead animal, including samples of tissue and organs for further analysis – is not usually done on moose carcasses due to budget and staffing constraints, but this winter there has been a more scrutiny on moose health.

Fish and Game staff in Anchorage and Fairbanks are looking for evidence of disease introduction and spread in moose, and more carcasses are being examined as a result.

Biologists Stephanie Sell, Jessy Coltrane and Tony Carnahan conducted the initial investigation. “That’s how we found the three cases of cyanide poisoning so far this year,” Beckmen said. “We diagnosed one case in 2006, so now when we get a report of a moose that staggers away from a chokecherry tree and dies suddenly with no other disease and there are chokecherries in the rumen, we test for it. It’s possible that more moose die each spring as a result of cyanide poisoning, but we don’t have the personnel or resources to examine and test them all.”

Beckmen said young moose are probably more susceptible to the poisoning because they’re smaller and fewer bites of the tree can be lethal.

Not all moose that browse on chokecherry die, some recover, and some don’t ingest any toxin at all. The most likely parts of the plant to produce cyanide are the buds and frosted leaves. Branches that have been pruned from chokecherry trees can also present a danger. “Property owners should make sure the clippings are disposed of and aren’t available to moose,” Beckmen said. In the most recent case, the calf had been browsing on chokecherry prunings stored under a porch that contained high levels of the toxin. 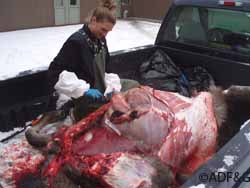 A necropsy on one of the young moose poisoned by ornamental chokecherry branches.

At least three species of chokecherry grow in Alaska but are not native to Alaska and have become an invasive species. They are commonly planted as ornamental plants but have spread and become established in the wild, displacing native vegetation such as willow that moose prefer. The European bird cherry, Prunus padus, is now the dominant vegetation along many of the streams running through the Anchorage greenbelt. Two of the yards where the moose died had all three species of chokecherry.

The Forest Service has been looking at the spread of chokecherry in Fairbanks, and noted that there are stands of the trees along the Boreal Forest Trail behind the Creamers’ farmhouse, and there are big stands of it along the Chena River (for example, across the river from the Carlson Center) which were partially mapped last summer. There are also a number of trees on the University of Alaska campus, both wild and deliberately planted as ornamentals.

In an attempt to limit the spread and new introductions, the Alaska Department of Natural Resources is moving to list Prunus padus as a prohibited plant.

Fish and Game is collaborating with the UAF and the federal Animal and Plant Health Inspection Service (APHIS) to further study to define the kinds of environmental conditions in Anchorage that cause toxin production, for example, when is it is highest and how fast it declines. That’s important, since there is much to learn about this now-widespread introduced plant and moose.

“Everything we know is based on other species of Prunus, in other parts of the country, poisoning different animals,” Beckmen said. “Nowhere else has moose poisoning from Prunus species ever been documented.”