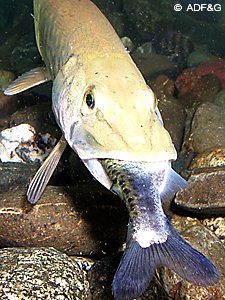 Pike are voracious predators and cause problems when they are introduced to areas to which they are not native.

Northern pike are a wonderful game fish in the waterways, lakes, and streams where they are native. In Alaska, pike naturally occur north and west of the Alaska Range where, over thousands of years, they have established a balance and coexist well with other native species.

But pike have recently been transported to and released into lakes in Anchorage and Matanuska-Susitna Valley - illegally stocked in lakes where they've never been before. They are salmon and trout-eating machines! Pike are a fish species that can change the entire makeup of the fish species in the waterways and ecosystems they invade.

This is a problem for Alaskans. The Alaska Department of Fish and Game is not interested in giving free meals of catchable rainbow trout and salmon to illegally introduced pike. In the Anchorage area, the Division of Sport Fish lake stocking program is in jeopardy because of these illegal stockings. If a lake is removed from the trout and salmon stocking program due to pike presence, that is one less opportunity for city anglers of all ages, especially kids, to have a place close to home to fish.

In order to protect our salmon and trout resource that not only brings in millions of dollars each year but provides residents with many fishing opportunities, the State of Alaska has a very conservative fish stocking policy. According to state regulations, no one is allowed to transport, possess, export, or release into the waters of the state any live fish or fish eggs without a Fish Transport Permit, issued by the Commissioner of Fish and Game.

This means people cannot put live fish, even "minnows", in a bucket then take them home - that is effectively possessing and transporting live fish without a permit. And one certainly cannot take pike from one lake and "seed" them into another.

Northern pike are not a problem everywhere in Alaska. Pike are native to parts of Alaska, and are a very important subsistence and sport fish in their native waters. There are bag and possession limits for pike in these areas. 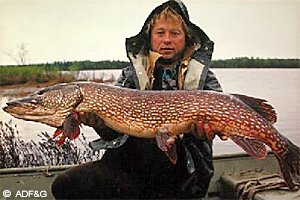 Pike can be a valued sport fish in areas where they naturally occur.

The most popular Interior pike fishing area is the Minto Flats, 800 square miles of interconnected lakes, rivers and sloughs. In the Flats, pike mainly eat whitefish, and each other. Unlike Southcentral Alaska, salmon stocks are not jeopardized by pike in the Minto area. The problem comes with the illegal introduction of pike into Anchorage lakes and Matanuska-Susitna Valley waterways.

Pike are very tough critters. Under the right conditions, pike can live up to 13 hours out of the water, and can survive even torn gills. Pike can travel 50 miles or more in search of new food sources. The Alaskan pike is the same fish that Midwestern anglers like to catch. The record Alaska Northern pike weighed in at 38 pounds, and was caught in the Innoko River.

The Alaska Department of Fish and Game is working on a number of fronts to address the issue of invasive pike. Biologists are studying pike in 12 areas in the Matanuska-Susitna Valley, and are working with Fish and Wildlife Protection officers to increase enforcement and prosecution of persons engaged in illegal stocking of pike or other non-native fish. Efforts are being made outside the department as well, and Alaska Rep. Kelly Wolf has proposed tougher penalties for illegal stocking.

The department encourages people to help reduce pike numbers in waterways where these voracious predators have been illegally introduced. Anglers are encouraged to go on pike hunting expeditions and keep all the pike caught. In the Southcentral region, with the exceptions of Alexander and Trapper lakes, there is no bag or possession limit on northern pike, open season is year-round, and spears or bow and arrow are included in legal gear.

Pike have delicious, delicate white meat and there are plenty of great recipes on the Internet and in local bookstores.

Fish and Game appreciates help from the public, and encourages people to report any illegal stocking activities immediately to Fish and Wildlife Safeguard at 1-800-478-3377.