More Alaskans Hunting Than Ever Before 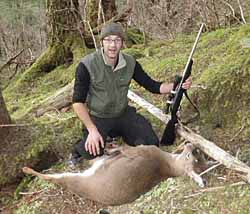 While hunting may be declining in many states, record numbers of Alaskans are taking to the field. More than 105,000 Alaskans bought hunting licenses last year, more than at any time in history.

Alaska resident hunting license sales are up about 18 percent over the past decade; there were about 17,570 more hunters in Alaska in 2009 than in 2000.

One of those is Terry Schwarz of Juneau. Schwarz bought a new .30-06 and shot a deer last year, right after Thanksgiving. Schwarz grew up in Anchorage, but did not grow up in family that hunted.

The price of a new deer rifle could buy a lot of beef, but Schwarz believes this is better.

“It’s a lot healthier and a lot more fun,” he said. “It connects you to your food source, which I think is a really good thing.” 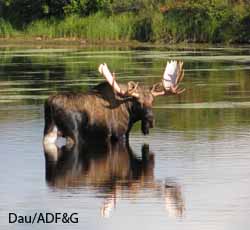 Alaskans harvest about 91 percent of the 8,000 moose taken each year, which provide about 3.5 million pounds of meat. Jim Dau photo.

Nonresident fishing has also declined slightly (about 6 percent) as well, particularly the sale of the temporary (one-day, three-day, etc.) fishing licenses most often purchased by visitors.

How to interpret that? Nonresidents are consuming less of Alaska’s resources and residents are consuming more. There are fewer tags issued to nonresidents for hunting moose and caribou. These are the bread and butter species for Alaskans, and more Alaskans are hunting these animals. Alaskans take 91 percent of the roughly 8,000 moose harvested and 97 percent of the roughly 22,000 caribou harvested each year.

Unlike Alaska, hunting is down in many states, and fewer Americans hunt today than did a decade ago.

A recent study funded by the National Shooting Sports Foundation estimates that about 22 million Americans hunted at least once over the past five years. About 14 million youth and adults hunt each year, but not all hunters take to the field every year. Working with 17 state wildlife agencies, the study looked at license sales patterns and found that 78 percent of the U.S. hunters who bought a license in a given year also purchased one again the following year. By examining purchasing patterns over multiple years, it was determined that for every two hunters in the field this year, one is taking the year off. 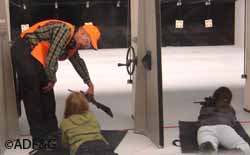 A few years ago, ADF&G biometrician Bob Sutherland looked at Alaska hunter statistics and found similar patterns. Sutherland found that 174,272 Alaska residents went hunting between 2003 and 2007, about 25 percent of the total population.

Sutherland offered some suggestions as to why hunters might take a year off. He said many hunters apply for permit hunts, for sheep or moose for example, and if they don’t get a permit for the hunt they want they don’t go that year. Others have conflicting family and work situations, for example, they have young kids and take a few years off, and then resume when they can start hunting with their kids.

For more statistics on hunting in Alaska, see:

http://www.admin.adfg.state.ak.us/admin/license/licstats.html.
For more on national hunting trends and statistics, see:

Riley Woodford is a hunter who took a year off last year when his daughter was born.