The Tarpon of the North
Kobuk River Sheefish 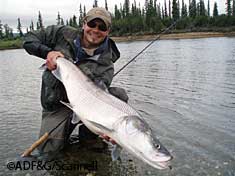 Craig Schwanke with a 45 inch sheefish caught on a fly rod right in front of camp. Photo by Heather Scannell

When I finally “grew up” and decided on a career I figured a fisheries biologist was a great way to go because I love the outdoors and I love to fish. I chose to work with the Sport Fish Division of the Alaska Department of Fish and Game because sport fishing was my background. Well it’s not all fun and games and I’ll admit I’m not fond of budgets and meetings, but when I got the chance to work with a fish nicknamed “the tarpon of the north”, because of its large size, fighting ability, and aerial displays, I knew all the time spent doing office work would be worthwhile.

The Kobuk River sheefish (Stenodus leucichthys) population supports inriver subsistence and sport fisheries along with winter subsistence and commercial fisheries that occur in Hotham Inlet (locally known as Kobuk Lake) and Selawik Lake. Sheefish harvested during the winter fisheries are a mixed-stock comprised of the only two known spawning populations in northwest Alaska, the Kobuk and Selawik River populations. Estimates of the spawning population have been determined for each stock and can vary from year to year (Kobuk River: 33,000-43,000; Selawik River: 23,000-43,000). However, estimates of spawning frequency (how often do they return to spawn) are critical in determining the total abundance of each stock based on spawning abundances because sheefish, unlike Pacific salmon, are iteroparous, which means they can spawn more than once, and not necessarily every year.

The official goal of the study was to use radiotelemtry methods to learn more about the spawning frequency of Kobuk River sheefish. The alternative goal or perk was to have fun! Gentlemen’s bets were placed on who would catch the most and biggest fish and prayers to the weather gods were offered up for good measure. So, we set out in mid July for six weeks during the summers of 2008 and 2009 and surgically implanted radio tags into 150 sheefish each year. Sheefish were captured over the course of their upstream spawning migration using rod and reel gear, which by the way is much more fun than a beach seine or a gill net. Sampling occurred just below their spawning grounds near the village of Kobuk. The radio tags will last up to five years and the information gathered will allow me to identify and describe the spawning frequency strategies used by adult sheefish in the Kobuk River. These strategies will be applied to estimates of the spawning abundance to determine the abundance of the entire Kobuk River sheefish stock. 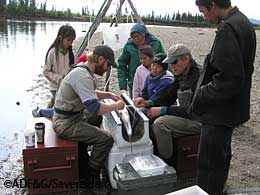 Loren St. Amand (ADF&G) and Bill Carter (USFWS) surgically implanting a radio tag into a large female sheefish. Local kids and elders from a “learning” camp located just upriver from the tagging site were participating in the capture of sheefish.

Sheefish are the largest member of the whitefish family. When French explorers first encountered them in northwest Canada in the late 1700s they gave the fish the name “poisson inconnu”, which means fish unknown in Old French. Native people throughout Alaska referred to them as “shees”, hence the name sheefish. Sheefish are found throughout the circumpolar north in large rivers and associated lakes of northwestern North America and in drainages of northern Asia to the White Sea. They are distinguishable by their relatively large size, streamlined body, and extended lower jaw. Sheefish are silvery in color and have large, prominent scales. Sheefish in the Kobuk River drainage may weigh up to 60 lbs and measure over 45 inches in length. The current state record is 53 lbs from the Pah River, which is a tributary of the Kobuk River.

Sheefish belong to the family Coregonidae under the Order Salmoniformes, which includes all salmon, trout, and chars, and like most salmon species, are anadromous. Anadromous fish are those that hatch in fresh water, migrate to and mature in seawater, and return to spawn in fresh water. In particular, Kobuk River sheefish are estuarine anadromous, which means the majority of their life is spent in the brackish waters of Kobuk Lake, Selawik Lake, and Kotzebue Sound. Kobuk River sheefish are also known to migrate back and forth from the sea to fresh water looking for food, also known as amphidromous. Young sheefish hatched in the Kobuk River do so during early spring before ice out. After hatching, they are carried downstream by high spring flows to a wide array of destinations that include backwaters along the river, off channel lakes, and the estuary regions mentioned above. Juvenile sheefish feed mainly on insects and other small prey, but as they mature, they will feed almost exclusively on other fish including herring, lamprey, and juvenile salmon and sheefish. Once mature, typically between age 5-9 for males and 7-12 for females, they return to their spawning grounds, which is a 90 km stretch of the Kobuk River from Kalla (an area ~ 10 km downstream from the Mauneluk River) upstream to Beaver Creek. 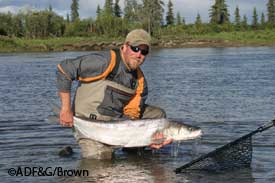 Previous studies and local knowledge have established that sheefish in the Kobuk River tend to reach spawning areas by late August and that post-spawning sheefish migrate quickly back to overwintering areas in the lower river or estuaries. Estimates of upstream and downstream migrations from the telemetry study have supported these findings. The upstream migration is protracted from June through August with a gradual increase in numbers, whereas the downstream migration is compressed with a rapid increase in numbers toward the end of September and early October.

In the end the project was a huge success. Sampling objectives were achieved, weather was good, village friends were made, and each member of the crew caught the biggest fresh water fish they had ever seen. Plus, I won the bet for the largest fish! Locals turned us on to a fishing hole named “puutu”, which we were told means fishing hole. Whether or not this is true doesn’t matter because we caught more fish than any other fish I have ever pursued, including bluegills, and anyone who has fished for pan fish knows that’s a lot of fish. My best friend who came up from Salt Lake City to volunteer said it best, “Puutu rocks!”

Although access to the Kobuk River is expensive, a popular way to experience the sport fishery is to float the river from Beaver Creek to the mouth of the Pah River. Charters out of Bettles are available and the best time of year would be late August through early September.