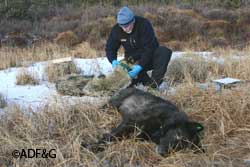 With snowmachine use on the rise in Alaska, a natural research question for wildlife biologists is how that increased human use during winter might affect wildlife movements.

Those were among the questions Fish and Game research biologist Todd Rinaldi hoped to answer when he began research for his master’s thesis in the Nelchina study area in Southcentral Alaska in 2004.

“These are things people have assumed for years, but they had never been tested,” Rinaldi said.

Rinaldi’s study area covered a popular recreational area in the Nelchina basin, stretching from Eureka to Crosswind Lake north to the Alphabet Hills.
He included a control area south of Glennallen from Tazlina Lake to the Heavenly Hills that lacked wolf hunting and trapping and had almost no network of snowmachine trails.

With the help of new technology, such as global positioning system (GPS) collars with longer-lasting batteries, radio-beam trail counters and resource selection models utilizing GIS data, Rinaldi was able to piece together a complex picture of how wolves used snowmachine trails in his study area. Through the resource selection models, Rinaldi was also able to surmise possible explanations for wolf behavior and movements across the study area.

The study, completed this summer, has yielded some interesting results.

In contrast to Jasper National Park, Rinaldi found that the Nelchina area wolf packs were not selecting snowmachine trails for winter travel. However, when they did make use of man-made trails, the wolves moved much faster on the hard-packed trails than they did off trail ¬– on average 3.7 times faster.

How fast wolves travel has not been measured accurately before in Alaska.
That was one benefit of the new technology used in the study. 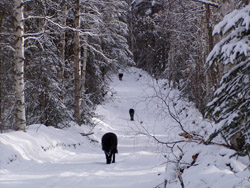 Wolves on the trail.

“Wolves were not selecting for trails,” Rinaldi said. “In fact, they only spent 1.5 percent of their time on trails. There was also no relationship between the size of their territories and their use of trails.”

By studying enhanced satellite images that provided great ground details, Rinaldi was able to document an extensive trail network with a total of 2,500 kilometers of trails and 815 kilometers of roads in the 17,000 square kilometer study area. To determine snowmachine use on those trails, Rinaldi then set out radio-beam trail counters over a two-year time period. Despite the extensive trail network, Rinaldi found that most of the trails still had relatively low human use. He also found that it took just two passes by a snowmachine to set a fairly packed trail. Also, as expected, snowmachine use increased through the winter as daylight hours grew longer.

All told, Rinaldi followed the movements of 12 wolves from five wolf packs.
Over two seasons, he downloaded a total of 172,000 GPS points, which enabled him to understand in great detail where wolves were moving.

To understand the wolves’ movements in relation to their habitat, Rinaldi then used GIS mapping to overlay information on wolf movements against snow conditions, prey availability, snowmachine use, trails, distance to water, and terrain conditions such as elevation and slope. 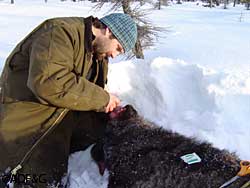 To understand where the wolves’ prey might be found, Rinaldi conducted two separate aerial moose surveys. On the ground, he also monitored snow stations throughout the Nelchina basin. At the stations, he measured snow depth and hardness to understand whether wolves could travel on top of the snow or whether they would punch through the crust as they moved.

Even though the trails were easier to travel on, snow conditions in the Nelchina area were such that off-trail travel was not significantly difficult for the wolves, Rinaldi found.

Interestingly, wolves used the snowmachine trails the least in late winter when snow was deepest and Rinaldi had thought the wolves would use the hard-packed pathways the most.

One possible explanation for the wolves’ slight avoidance of trails in late winter is that is when human activity and hunting pressure are highest and hunters and trappers are using the trails and frozen lakes to look for wolves. Rinaldi’s study area was an active predator management area with a high wolf harvest.

Rinaldi surmises that the wolves might have been avoiding trails and frozen lakes during that part of the winter because of the increase chance of encounters with hunters.

“Findings from this study suggest that for a heavily exploited wolf population in areas with light to moderate snow depths, the cost of utilizing a network of linear features outweighed any potential energetic benefits associated with winter travel and prey capture,” Rinaldi wrote in his master’s thesis, titled “Influence of Linear Features and Snowmachine Activity on Resource Selection by Wolves.”