The Anchor River Sonar/Weir Project:
Counting Fish One Year at a Time 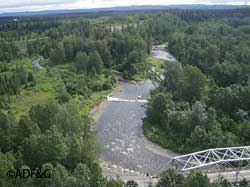 In a 1954 Anchor River stream survey report, fishery biologist Rodger Allin wrote: “The Homer highway was constructed in 1948; at that time it was only a vehicular trail and received little use by anglers. In 1949 further road work was done and cars and anglers started making regular trips into this area. As the road was improved and the reputation of the river became known, the fishing pressures mounted.”

Since then, the reputation of Anchor River has grown along with the number of anglers who value fishing this small, rocky stream that supports an array of fishing opportunities beginning in the spring with king salmon and continuing through the steelhead trout immigration in early fall. Generations of anglers have fished for Anchor River king salmon, a pursuit that has evolved into an annual tradition many hold dear.

In the past, when king salmon returned to the river during May and early June, high river levels caused by snowmelt run-off prevented Alaska Department of Fish and Game (ADF&G) biologists from counting returning fish. To gauge the run strength of Anchor River king salmon, biologists were limited to estimating king salmon escapement by counting spawning kings from a helicopter on a single day during the peak of spawning activity. These aerial counts were not presumed to be the actual number of king salmon in the river, but more an indicator of how many truly spawned. 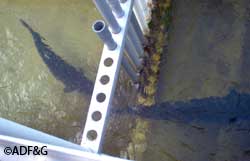 In 2003, ADF&G improved the estimate of Anchor River kings by using a new sonar system called DIDSON (Dual-frequency IDentification Sonar) during high water levels in May and early June. The DIDSON enables biologists to see actual fish images, estimate the size of the fish, distinguish between upstream and downstream swimming fish, but not determine fish species. The sonar site was chosen because it was located above the fishery (approximately two miles from the mouth) and still in a single channel below the North and South forks. Netting upstream of the sonar site allowed biologists to determine the composition of fish species that passed the sonar site and to measure, sex and collect scales to determine the age of individual king salmon. The project was expanded in 2004 by installing a weir in mid-June when water levels lowered and by continuing to count fish through the silver salmon run. Weirs are a better method to identify, count and sample fish when there are multiple species of fish in the river, which is the case in the Anchor River as the season progresses.

In 2007, ADF&G estimated that at least 5,000 king salmon are needed to pass the fishery and spawn in the Anchor River for the king salmon stock to sustain itself at its highest level. This was derived from historical harvest estimates, aerial counts, and five years (2003-2007) of escapement estimates and age composition information from the sonar/weir project.

Prior to the sonar/weir project, when king salmon escapement was monitored with a single aerial survey during the peak spawning period, the average number of king salmon estimated over all years was used to calculate a sustainable escapement goal (SEG) range. In subsequent years, the river was restricted or liberalized if the aerial count fell below or above the range for several years in a row. Now, using the sonar and weir, ADF&G can monitor king salmon escapement in season and adjust regulations as required to allow more fish to spawn. Once we have 14 years, or two life cycles, of Anchor River king salmon escapement counts, we will be able to better estimate the maximum number of fish needed to spawn to perpetuate the run at the highest level. Then the fishery could be liberalized if the king salmon counts look like they will exceed the maximum needed. The fish counts from the sonar/weir project are available at the ADF&G Sport Fish Division website at http://www.adfg.alaska.gov/sf/FishCounts/ 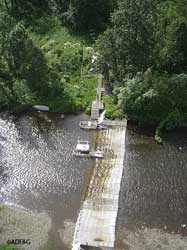 The site was chosen because it was located above the fishery (approximately two miles from the mouth) and still in a single channel below the North and South forks.The project was expanded in 2004 by installing a weir in mid-June when water levels lowered and by continuing to count fish through the silver salmon run.

Carol Kerkvliet is the assistant area management biologist for the Alaska Department of Fish and Game, Division of Sport Fish, in Homer.