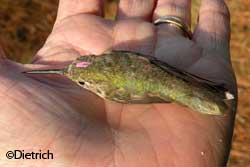 This one-year-old female rufuos hummingbird was caught and given band H82779 in Florida in January. She was recaptured in Alaska six months and 3,530 miles later.

Fighters. Junkies. Vagrants. Terms we don’t usually associate with hummingbirds. But a record-setting rufous hummingbird and to two dedicated “humbanders” have brought some of these tiny birds’ quirkier qualities to light.

Hummingbird banders Fred Dietrich and Kate McLaughlin live 3,530 miles apart, in the Florida panhandle and in Prince William Sound, Alaska. They belong to a network of professional and “citizen” scientists across the country that are capturing and banding hummingbirds to better understand migration patterns. Birds are caught – and banded birds are re-captured – in their wintering areas in the south and their summer nesting areas in the north, and sometimes in between during migrations.

Dietrich caught and banded a one-year-old female rufous hummingbird on Jan. 13, 2010, near his home in Tallahassee, Florida. The tiny band, 1/16th by ¼ of an inch, was marked with a letter and five numbers – H82779. McLaughlin captured the bird on June 28, at Chenega Bay, Alaska, about 75 miles southeast of Anchorage in Prince William Sound. She didn’t realize it at the time, but this 3,500 mile-plus trip marks the longest migration of a hummingbird ever documented.

McLaughlin is an independent biologist who consults on a variety of projects, and staffs the hummingbird banding station in Chenega Bay. “Since 2007 I've banded more than 900 birds,” she said. “This year we banded 212, and we had 51 recaptures.”

All McLaughlin’s recaptures have been birds originally banded in Chenega Bay at her station – until now. “In all that time we’ve had about 79 recaptures, all birds we’ve banded, either as babies or adults returning,” she said. “We had never had a recapture before that was banded by someone else, and to have it turn out to be the world record setting hummingbird is even more the whipped cream with the cherry on top.”

To track down the history of H82779, McLaughlin tapped into the hummingbird banding network and found Dietrich. The federal Bird Banding Laboratory supplies bird bands and keeps records of North American birds, but Dietrich said the birders’ network is faster. He posted the information there on little H82779 last winter.

“We have a sort of informal listserve, ‘humband,’ for all hummingbird banders,” Dietrich said. “We post it on there, and Kate found it, and put a note on the list serve. She had no idea who banded it.”

Hummingbirds usually arrive in Prince William Sound in early May, but they came a little earlier this year, in the last week of April. “It’s a short season, just three months,” McLaughlin said. “My last band date was July 28, but I caught a glimpse of one the first week of August.” 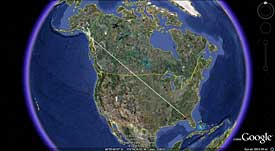 The direct distance between Tallahasse and Chenega Bay is 3,530 miles. It's more likely the bird took an indirect route from Florida - west to the Pacific and then up the coast. If H82779 took this route, her migration would have been closer to 4,330 miles. A round trip on a likely elliptical route would mean a journey of 8,840 miles.

“When you think of how little time they spend here, to fly all the way up here to have babies and leave, the benefit to them must be tremendous,” she added.

That benefit applies to a lot of hummingbirds. “If I've banded 900 birds here in Chenega Bay, imagine how many birds there are across the sound,” she said. “I’d like to do a four-day banding session at several locations, here, Valdez, Cordova, that would give us a good baseline estimate of the actual population of rufous hummingbirds in the sound.”

Rufous hummingbirds are the only species of hummingbird she’s caught at the Chenega Bay station, although she said there was one instance of Anna’s hummingbird caught in Cordova.

“There is not a lot known about hummingbird migration,” said McLaughlin, “There is a lot more information we need to get, now that we have this (documentation) on both sides of the route.”

In Florida, Dietrich’s side of “the route,” rufous hummingbirds are found from November through February, with the peak in early January.

Dietrich has been banding birds for a decade as an apprentice, working under a master bander. He just started banding on his own this past winter, he said. The birds are caught at hummingbird feeders using a special trap. “We do this at homes where people have feeders, and we let folks see and help,” he said. “We have a list of about 100 people that we are working with here in Tallahassee.”

“We usually wait for the first frost, which kills all the flowers, and the birds are more likely to go into the trap,” Dietrich said.

That’s not a problem for some birds. “They’re not stressed by the process,” Dietrich said. “They fight all the time anyway. You trap some and they come right back, they’re junkies; you can catch them ten times. Others get wary of the trap, they know, and they’re hard to catch.”

The banders put a tiny spot of temporary color on the bird’s head once it’s been caught so they don’t catch it again, or if it is trapped, it can be released without being handled.

Dietrich banded 37 hummingbirds this winter, including six that had been previously caught. He said the recaptured birds included three returning for their fourth winter in Tallahassee and one returning for its seventh winter.

“Rufous have great site fidelity,” he said. “They come back.” They not only return to the same wintering areas each year, they return to the exact same flower bushes and feeders. McLaughlin said she sees the same thing. 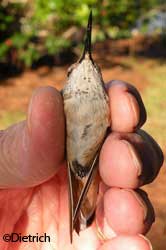 “They remember where the feeder was the year before and go to the same spots,” she said.

Dietrich is impressed by hummingbirds’ homing ability. “That one bird has been coming here for seven years, she knows what she’s doing,” he said. “These birds don’t flock, so the young ones are on their own, they’re not shown the way. We think these have some genetic connection, and they’re probably related, they know to come here.”

“How they do it, how they remember, it seems impossible,” he added.

The Rufous is the most widely-distributed hummingbird in North America. It generally winters in Mexico, and possibly as far south as Panama, and has the longest migration route of all U.S. hummingbirds.

Dietrich said that 30 years ago; conventional wisdom held that the only hummingbird east of Mississippi was the ruby-throated. Rufous hummingbirds wintered in Mexico, and the occasional migrants that appeared in winter were called vagrants. But over time these vagrants have consistently wintered outside the range of most rufous hummingbirds.

“We really don’t know what their migration pattern is,” Dietrich said. “We’re piecing together the migration route, but we have to have same-year observances to document.”

Dietrich said when the rufous hummingbirds leave Alaska; it is believed their migration route goes south along the Pacific Coast, then heads east across the northern states. “They’ve caught them in Ohio, Michigan and Pennsylvania,” he said. They then fly down the East Coast to Florida. Some winter further north, others continue south to Mexico. When they return north in the spring they first go west along the Gulf Coast then head to the Pacific Northwest and then north.

Parts of this elliptical route have been documented, but not the whole thing. “We have same-year observances of birds flying from Atlanta to Tallahassee, and from southern Alabama to Louisiana,” Dietrich said.

“This is the bird we’ve been waiting for,” Dietrich said. “The next thing is to find her when she comes back; we’re really hoping she shows up.”