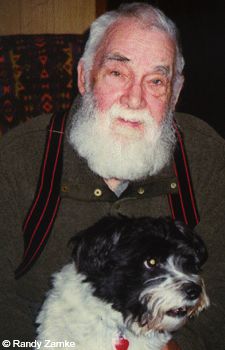 Earl Callihan and his wife live in Petersburg, but they spent decades living on Prince of Wales, Etolin and Admiralty Islands and aboard boats, trapping throughout Southeast.

Earl grew up in the forests of Northern Washington and Idaho during the Great Depression. A hand-troller-turned-logger told him stories of Southeast Alaska, and Callihan headed north shortly after finishing high school.

Callihan and his wife trapped and hunted every game and fur-bearing animal in Southeast Alaska. They gardened, canned, smoked, dried and froze tons of food over decades spent close to the land and water.

Callihan made mink traps from bits of wire, rocks and sticks. He used wolves' own wariness to his own advantage, second-guessing them to snare them. At times he used bait in traps, but often he used insights into animal behavior to strategically set traps.

Callihan tells of one close encounter with a brown bear. It was evening and he was on the beach, ready to skiff home after a day of deer hunting on a remote island. He looked up and a bear had stepped out of the woods and was watching him. He didn't feel threatened at first, but that quickly changed.

"I could tell from the way he was watching me he was pretty interested in what he was seeing. That son of a gun just deliberately came on over the rocks ... and stopped and stood up on his hind feet."

Callihan figured he'd discourage the bear and he dropped to one knee and carefully fired a shot into the rocks a few feet to one side of the bear, figuring the bear would run like a deer for the woods.

"Bang! That H and H went off, and instantly he drops to his feet and he comes just like a racehorse right over to where I was. He pulls up from here to the road out there and stops. I was a little concerned. I didn't want to kill him - I was talking to him. I told him, 'You son of a bitch, you make one more move and I'll kill you. And I got just the equipment to do 'er with right here, a .375 H and H.' I'd feed him one of those 350 grain pills, and that's big enough to discourage a bear.

You know, he kind of acted like a dog. I'm sure he didn't know what I was talking about, or maybe he didn't even hear me, I don't know, but he walked around there a little bit. My hands were so sweaty, I thought that rifle'd slide outta them.

He pooped around a little bit and went up on the beach and took a mouthful of old, dry grass, and when he did that, I knew that whatever he'd had in mind, he'd changed his mind. He walked down the beach a little ways and I got in the skiff and carried on."

"That was the closest I'd ever come - he didn't just happen to run in my direction, he knew exactly what he was doing…He don't know how close he come to getting a 350 hardnose Hornady right between the cookhouse and the bunkhouse."