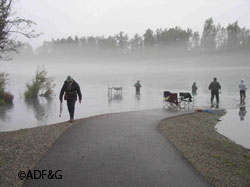 Alaska is one of the most popular sport fishing destinations in the United States. With more shoreline than the entire Lower 48; more than 9,000 officially named rivers, creeks and streams; and more than 3 million lakes, sport fishing opportunities abound. The problem is, how do you get to those far-flung waters from here? Though Alaska is more than twice the size of Texas, it provides only about 4,900 miles of paved roadways. As a result, the vast majority of sport fisheries must be accessed via boat, float plane, or by walking in.

The Recreational Boating and Angler Access Program is able to accomplish its goals by using federal funds through the Sport Fish Restoration Program (SFR), commonly referred to as the Dingell Johnson (D J) Act or the Wallop Breaux (W B) Amendment. ADF&G is the only department in state government that can receive and use funds from the SFR Account. Of the total statewide SFR apportionment, 15 percent is mandated to be used for projects benefitting the recreational power boater. Though a wide array of projects qualify for boating access funding, the majority of completed projects center on recreational boating access to marine and freshwater sport fishing opportunities. These projects include construction of boat launch ramps and associated parking, mooring floats, fish cleaning stations, and upland improvements such as toilet facilities and trash receptacles. Access projects that are related to non-boating uses are referred to as “angler access” projects and include trail improvements, fishing docks, and other projects where boats are not used. However, since there is no mandate on the use of SFR funds for angler access projects, funding is hard to come by as it is already budgeted for research, management, information and education, hatcheries, and other divisional programs.

SFR funds are derived from federal excise taxes and import duties on sport fishing tackle, recreational boats and gasoline used in recreational boats. This is a true user pay, user benefit program, with SFR funds providing up to 75 percent of the cost of an eligible project. The remaining 25 percent, called state or local match, must be made up of non federal funds or assets. Access projects are accomplished in cooperation with a local government entity or another state agency (generally the land owner or land manager) in order to keep program administration costs low. In general, the Access Program provides the capital to build or help build a project, while the cooperating agency is responsible for providing operation and maintenance (O&M) of the improvements through the useful life of the completed project. The useful life of a project is based on project objectives and the engineered design life of the improvements, e.g. new marine boat launch ramp and mooring floats have a 20-year life. Because there is a federal investment in the completed project, it must be managed and maintained in a manner that will ensure safe and orderly public use through the end of the improvement’s useful life. Once the useful life (and federal obligation) is met, ownership of the project improvements becomes that of the cooperating agency. 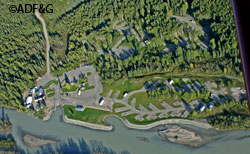 ADF&G actually owns and/or manages very few access sites, and for good reason. Most developed access sites receive intense public use, and with it, associated social issues such as vandalism, illegal camping, drunken disorderly conduct, and other negative or irresponsible behavior. ADF&G simply does not have the regulatory authority to enforce these types of violations, nor the resources to deal with the situations that may arise. As such, most access-funded projects are managed by either State Parks (Park Rangers) or a local government agency.

Since its inception in the mid-1980’s, the Boating Access Program has completed over 160 capital improvement projects and land acquisitions that have constructed and improved boating and angler access sites spreading from Ketchikan in southeast Alaska, to Dillingham in southwest, and Fairbanks up north. Though some SFR–funded boating access projects are utilized year-round (especially in southeast Alaska), most in the south-central and northern regions of the state experience more seasonal use.

Some of the more popular sites offering Access Program improvements in south-central Alaska include:

• Whittier Harbor – The Access Program recently completed new boat ramps and mooring floats located at the east end of the harbor and has also provided fish cleaning stations at several locations in the harbor. Whittier provides quick access to Prince William Sound where recreational boaters may take part in a variety of salmon and bottom fish angling opportunities, the pot shrimp fishery, or camping and wildlife viewing.

• Little Susitna River Public Use Facility (Matanuska/Susitna Valley) - Located within the Susitna Flats Game Refuge, this facility has received numerous improvements since original construction in 1990. The site provides a boat ramp, barrier-free trails for shore fishing, and is a popular destination for king and silver salmon anglers. Camp sites are available at both the facility and boat-access-only sites along the river.

• Susitna Landing (at the mouth of the Kashwitna River - Matanuska/Susitna Valley) – The most developed ADF&G-owned boating access site, this facility boasts recent improvements that include developed RV and tent camping sites, accessible showers and toilets, boat launch and boarding float and interconnecting trails. The facility provides boaters access to the entire Susitna River drainage for a variety of fishing, hunting and recreational activities.

In southeast Alaska, (from Ketchikan down south, to Haines up north) the Access Program has provided numerous improvements, which are primarily marine in nature. Some of the more popular sites include:

• Knudson Cove Marine Launch Ramp Facility (Ketchikan) – This is a very popular year-round facility with extremely high use from June through September, providing good access to enhanced and wild runs of king and silver salmon. It is also a popular access site for halibut, lingcod and rockfish and is used to access several freshwater systems with steelhead and trout fishing opportunities, such as the Naha River. 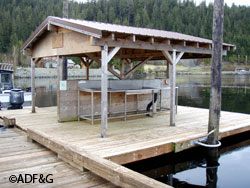 • Heritage Harbor Marine Launch Ramp (Wrangell) - A popular launch in Wrangell with high use from May through September. Sport Anglers primarily target king salmon in the marine fishery with extremely high use during the local derby (May-mid June). The facility is also used by fresh water anglers accessing the Stikine River via boat.

• Starrigavin Marine Launch Facility (Sitka) - A very popular launch ramp with extremely high angler use from May through August. The site provides good access to the best marine fishing in the region with anglers targeting king and silver salmon, halibut, lingcod, rockfish and shellfish.

Some of the more popular SFR-funded improved sites when traveling in the more northern road-accessible areas of the state include:

• Nordale Wayside Boat Launch – Providing access to the Chena River, this site stays busy during the summer months with recreational boaters targeting Arctic grayling and king salmon with peak use in late June through late July.

• George Lake Boat Launch and property – The site provides a gravel launch ramp into the Tanana River which provides access to George Lake. Once on George Lake, four land parcels provide three tent platforms and one cabin for recreational boaters and sport anglers, who primarily target the pike fishery in June.

More specific information about individual SFR-funded sites can be found at the Recreational Boating and Angler Access website. (http://www.sf.adfg.state.ak.us/Statewide/AccessProgram/)
Other Sources of Information:

•Information about the Federal Aid in Sport Fish Restoration program can be found on the U.S. Fish & Wildlife Service website, under "Grants". http://www.fws.gov/

•Information pertaining to legal public access to the states land and water can be found on the Sport Fish Division (Restoration Section) Legal Access Program website.

Paul Cyr is the Statewide Recreational Boating Access Program Coordinator, stationed in Anchorage. He has worked for the Division of Sport Fish since 1989.