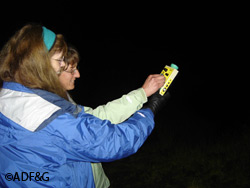 A dozen people stood hushed in the Southeast Alaska twilight, listening for bats. As the bat detector emitted a burst of clicks, one citizen scientist whispered, “I see it. Between those trees.”

The midnight gathering was part of BioBlitz, which brought scientists and citizen volunteers together to catalogue life in Fish Creek Valley on Douglas Island near Juneau. State wildlife biologist Karen Blejwas headed the bat team, and before the late-night field session she provided an overview of Alaska’s bats and bat detection techniques.

“If you have a bat roosting in your house it’s almost certainly a little brown bat,” she told the group. The aptly named little brown bat - Myotis lucifugis - is the most common bat in Alaska, ranging from southern Southeast to Interior Alaska. It’s most likely what was flitting between the spruce trees on Fish Creek, as it is the most widespread bat in North America. There’s a good reason.

“It’s an ecological generalist in terms of its roost selection and what it eats,” Blejwas said. Insects and spiders make up much of the diet, detected on the wing by echolocation.

The little brown bat is the only bat found in Interior and South Central Alaska. Four other bat species are found in Southeast, although not in numbers that compare to the little brown bat - Keen's long-eared bat (Myotis keenii), long-legged myotis (Myotis volans), California bat (Myotis californicus) and the silver-haired bat (Lasionycteris noctivagans). These bats are all quite similar.

The little brown bat breeds in late fall or winter, but the female avoids the demands of gestation during hibernation by storing the sperm until May, when implantation occurs and pregnancy begins. A single pup is born in June or July, naked and blind. Mother bats tend to congregate together in maternity roosts. The newborn bats then either hang there with other young, or cling to the mother's stomach while she forages. Usually, the young are "fledged" within a month.

It’s quite unusual for a small mammal to have a single baby – mice, voles and lemmings have large litters, often several times a year. But they are short-lived, and banded bats have been known to live in the wild for over 20 years.

Unfortunately, many bats in America are dying well before that. Bats face a host of threats in the 21st century. Wind farms are a newly emerging hazard, and Blejwas said in some areas bats are more susceptible to being hit by windmill blades than birds. Pesticides can be bad for bats – poisoning bats directly and by reducing their insect prey. Habitat loss is another threat, as logging claims big trees that many bat species rely on for maternity roosts.
Disturbance can be bad for bats as well, especially during winter hibernation. “A lot of cave sites receive heavy use by visitors and tourists,” Blejwas said. “People are going in and causing them to rouse, and it’s energetically expensive for the bats.”

The greatest threat, however, has claimed close to half a million bats in the past few years. A disease epidemic called white nose syndrome is sweeping through North American bat populations, and little brown bats are especially hard hit. It’s caused by a fungus that appears white around the muzzle and on the wing membranes.

“They’re not really sure what it is that’s killing the bats, but they think the fungus or something associated with the fungus causes them to rouse too frequently and for too long in the winter time, so they burn up all their energy and they basically starve to death,” Blejwas said. “They’re found often outside the caves. You find a lot of dead bats outside the entrance, or really sick bats.

White nose syndrome was first discovered in New York State in February 2006 and within two years spread to neighboring states. In the past two years it’s moved to more distant states and Ontario, Canada.

“It’s got to be really depressing to be a bat biologist in the Northeast – it’s spread to new species, and it’s started hop-scotching over to Missouri, Tennessee, and Oklahoma,” she said. “So a lot of bat biologists in the Western United states thought they had a few years to figure this out, and it doesn’t appear that will be the case.” 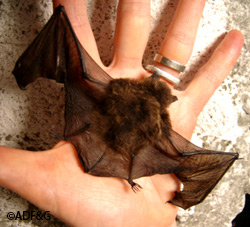 Bats are not rodents but belong to the order chiroptera, which means “hand wing.” The bats’ wing is like a modified hand, with the wing membrane spread between the “fingers.”

The disease has not appeared in the Western U.S. or Alaska. That’s good, because if bats were affected, biologists might not be aware of the extent of the impact. “In the West, we know a lot less about where bats hibernate, and in what kind of numbers, and what habitats,” she said.

That’s especially true of bats in Alaska, Blejwas said. “We don’t know about the distribution of most of the species in Southeast. We don’t know where Southeast bats spend the winter – do they spend the winter here locally, do they migrate to the coast, or further south? We don’t know where they hibernate – in caves or trees or abandoned mines – and we don’t really know when they become active in the spring, or when they start hibernating, or migrate in the fall.”

The Wildlife Diversity Program with the Alaska Department of Fish and Game is working to learn more about bats in Alaska, and Blejwas has started an acoustic monitoring project in the Juneau area. It involves passive monitoring using stationary detectors, and active monitoring - walking around on the local trails with a hand held bat detector.

Bat detectors basically divide the frequency of bats’ ultrasonic calls, which are octaves above the range of human hearing, and make them audible. These aren’t squeaks – bats do make audible sounds – these are clicks, just as killer whales and dolphins emit high frequency clicks to echolocate in their aquatic environment. As in radar and sonar, the sound wave bounces back from surroundings and returns to the sender for processing and interpretation, creating a “picture” of the environment. Bats aren’t blind, but they depend on their hearing to “see” their environment and their prey as they fly. Flying through trees requires a series of steady clicks. Catching a flying insect requires a rapid burst of clicks, known to bat biologists as a feeding buzz.

Two passive monitors are currently set-up in Juneau. “We’re going to run these year round,” she said. “They go on every night and record all night long, and this information will give us an idea of the seasonal and daily activity patterns for bats. When do they become active in the spring, for example? I put these out in April and the first night we got bats, and have consistently from that night on. I didn’t get them out early enough to know when they’re emerging form hibernation or migrating in, but hopefully in the future we’ll get an idea about that.”

The surveys are simple, Blejwas said. She’s been doing them since April, and has enlisted local volunteers as well. The bat surveyor heads out a half hour after sunset, close to twilight is best, for at least an hour, equipped with a bat detector, a notebook and a GPS. “You walk down the trail, and when you hear a bat you mark a waypoint on the GPS,” she said. “Try to get a look at the bat – where is it foraging, describe its behavior – is it foraging in the canopy? Over water? Those kinds of things are really good.”

Blejwas hopes to expand the monitoring to other communities in Southeast. “It would be really interesting to get information further south, and out along the coast and get the timing of when bats become active there, and when they stop being active in the fall, to get a handle on this whole migration and hibernation question.”