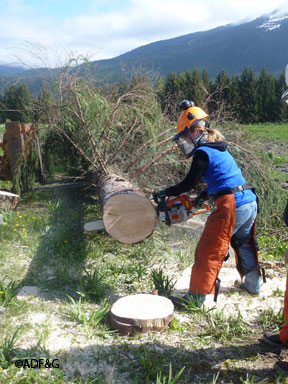 A BOW participant in the chainsaw class, taught by local volunteer instructors. Photo by Patti Harper.

Running a chainsaw, driving a skiff and butchering a deer are no longer intimidating or mysterious tasks for a number of women in Southeast Alaska. About 60 women participated in the Becoming an Outdoors Woman weekend workshop in late May, learning a variety of outdoors skills.

“I went from fearful to confident,” said one participant in the chainsaw class. Decked out in chaps, a hardhat, gloves, hearing and eye protection, women warmed up with a small saw and quickly moved to a large chainsaw, spewing sawdust as they sliced through a 16-inch-diameter tree trunk.

During lulls in the sawing, shots and cheers carried across the meadow as women in the shotgun class a quarter-mile away took turns blasting clay pigeons. It was obvious from the shouts and applause which shots found their mark. 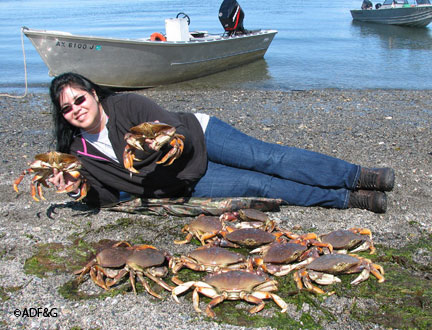 Crabbing and skiff handling were among the suite of classes offered. BOW coordinators hope to offer boat trailering as well next year. Photo by Candice Bressler.

The Echo Ranch Bible Camp beyond the end of the road north of Juneau hosted the event, and weather was perfect.

After the prerequisite firearms safety class, women shot .22s or shotguns. One woman wrote, “Thank you for this course! I was petrified of guns and now am able to handle them safely and enjoy shooting – instructors are fantastic!” Class evaluations echoed this sentiment time and again – intimidating or out-of-reach experiences were demystified and made accessible.

The crabbing class was particularly popular. Due to the limited number of spaces available in the skiff, the instructors used a second skiff and at the last minute volunteered to teach several additional classes. Two other skiffs were on hand for the skiff handling class. Other classes included an introduction to deer hunting, archery, survival, wild edible plants, Dutch oven cooking, wildlife watching/tracking and animal sign and salmon fishing. Women also learned to smoke and pickle fish, kayak, flyfish and spincast, and navigate by map, compass and GPS. A total of 22 different classes were offered, many twice, in four three hour sessions over the course of the weekend. 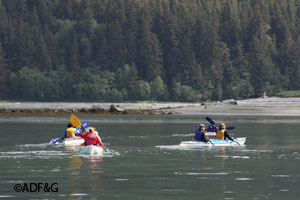 Participants took four classes each and stayed in cabins at the camp.

The Echo Ranch Bible Camp will host the 2011 Southeast BOW event. It will be held again on the third weekend of May. A similar suite of courses will be available, and camp staff offered to teach horseback riding classes as well.

Riley Woodford is an information officer with the Divsion of Wildlife Conservation and helped coordinate the SE BOW event.