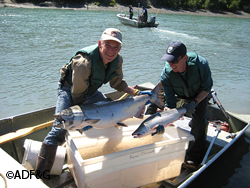 Example of the size difference between Chinook and sockeye salmon. Photographer: Debby Burwen

Differentiating between these species is critical for producing accurate Chinook passage estimates. As sonar technology has improved over the years, so has our ability to better differentiate between the “red” fish and the “blue” fish.

The Kenai River Chinook salmon sonar project is located approximately eight miles upstream from the river’s mouth. If you have boated or fished on the lower river, between Beaver Creek and the Cow Pastures, you have probably noticed the large tan tent on the river bank, the data cables suspended over the river, and the many buoys marking the submerged sonar equipment in the river.

Differentiating between species in rivers is a challenge, and extensive research has been conducted at the Kenai River Chinook sonar site toward improving our ability to identify species from acoustic data. Since the project’s inception, acoustic size (average strength of returning echoes) and range (distance from shore) thresholds have been used to differentiate between sockeye and Chinook salmon. These criteria are based on the premise that sockeye salmon are smaller and migrate primarily near shore, whereas Chinook salmon are larger and tend to migrate up the middle of the river. However, studies have shown that these criteria can lead to biased estimates. 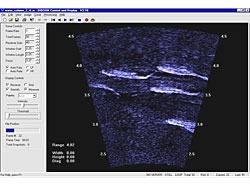 Screen shot of the DIDSON software displaying an image of five fish passing the sonar.

Recently, ADF&G has evaluated the potential for a relatively new sonar technology, Dual-frequency IDentification SONar (DIDSON), to provide improved discrimination of larger Chinook from smaller species of salmon based on size measurements taken directly from high-resolution images of migrating salmon. DIDSON was originally designed by the University of Washington’s Applied Physics Laboratory for military applications such as harbor surveillance and mine identification. DIDSON incorporates a sophisticated lens system that produces images approaching the quality achieved with conventional optics, with the added advantage that images can be obtained in dark or turbid water at farther ranges than is possible with a camera. ADF&G has adapted this technology to estimate fish passage in rivers, and has deployed more than 10 DIDSON units statewide. At the Kenai River Chinook sonar site, ongoing studies using recent advancements in lens technology have shown that sufficiently accurate estimates of fish size can now be obtained from DIDSON images at ranges up to 30 meters.

In addition to providing accurate size measurements, DIDSON has several other advantages over the split-beam sonar technology presently in use. The video quality images produced by DIDSON provide a clearer picture of any anomalous fish behavior and allow for better identification of individual fish when traveling in closely-spaced groups (as sockeye often do). Wider beam dimensions, combined with sophisticated software algorithms that can remove bottom structure from the image, improve fish detection by allowing better coverage of the water column. DIDSON is also simpler to use than split-beam systems, translating into less personnel training time and quicker set-up times.

The second half of the battle

Knowing that DIDSON provides accurate estimates of fish size is only half the battle. The next step is developing the data-processing framework for processing large amounts of data in a timely manner to meet the needs of fishery managers. The DIDSON system generates about 1.2 Gigabytes of data per hour (30 GB/day!). The process currently used to review this volume of data and to manually measure fish lengths from DIDSON images is labor intensive and may not be practical for high density fish passage rates. Consequently, we are currently investigating ways to automate fish size measurements. In 2008, ADF&G was awarded a three-year Southeast Sustainability Salmon Fund grant to develop an automated measurement system using Echoview software. The automated measurement software, which has the potential to considerably speed up the measurement process, is showing some promise and will be further tested this summer. 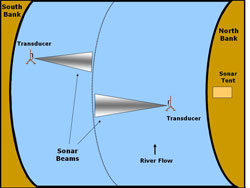 One aspect of transitioning to a new sonar system is determining how the passage estimates produced by the new system (DIDSON) relate to historical estimates produced by the old system (split-beam). ADF&G collected limited side-by-side split-beam and DIDSON data during the 2007 and 2008 seasons and collected comparison data for the entire season from one bank in 2009. This year, we will attempt to collect side-by-side comparison data from both banks for the entire season. ADF&G will also start a multi-year mark recapture study in 2010 that will provide an independent estimate of Chinook salmon abundance for comparison with both (split-beam and DIDSON) sonar estimates.

If all goes well, a complete transition from split-beam to DIDSON may occur over the next several years. During this time (and beyond) sonar technologies will no doubt continue to evolve, and ADF&G will continue to be at the forefront of researching advanced sonar technologies for use in estimating salmon passage in rivers - including the ability to accurately differentiate between the “red” fish and the “blue” fish.

Jim Miller and Debby Burwen are fishery biologists with the Sport Fish Division, based in Anchorage