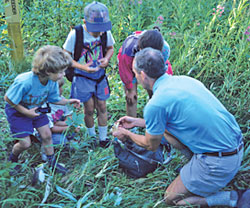 Science and outreach intersect at Bioblitz. An Alaska Bioblitz event will be held on Douglas Island on June 26.

Flying squirrels, meadow voles and water shrews are among the elusive and undocumented mammals suspected to inhabit Douglas Island in Southeast Alaska. Those critters are likely to get their official documentation in June during the BioBlitz, when teams of biologists and citizen scientists take to the forests, meadows and beaches in an intense 24-hour scrutiny of life on the island.

The BioBlitz is a carefully organized assessment of the plants, animals, fungi and insects – all life – in a defined area. Wildlife biologist Karen Blejwas said BioBlitz events, sponsored by universities, state agencies and communities, have been held in places as diverse as New York City’s Central Park and Whistler Ski Area in British Columbia. The exact nature of the event depends on who organizes it.

“Sometimes they’re organized by museums,” said Blejwas, part of the Wildlife Diversity Program at ADF&G and one of the organizers of the Southeast event. “They want to collect specimens for the museum collection, and in that case the public may mostly just observe scientists at work. Others have a more educational focus, where the public actually goes out into the field with the scientists, like the one we’re doing. Other times they’re in parks, and managers want to know what organisms are found in the park, if they have any rare or endangered species, or any invasive species.”

Alaska has seen one BioBlitz already, in Homer, and Sitka recently conducted a BioBlitz variation looking at invasive species.

Taxon Teams Take to the Field

The Douglas Island event begins at noon on June 26. Twelve scientists will lead “taxon teams” focusing on amphibians, birds, freshwater invertebrates and other life – and volunteers are invited to join and participate. The lodge at the Eaglecrest ski area will serve as headquarters, and teams will survey the Fish Creek drainage from the alpine to the ocean.

Wildlife biologist Tom Schumacher will lead the mammal taxon team. “We’ll be doing a mix of live trapping and documenting,” he said. “We’ll do small mammal trapping with live traps, and camera trapping is something else we’re going to try.” Camera traps are digital cameras triggered by motion detectors. 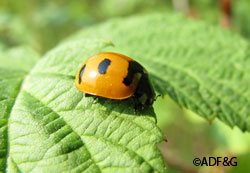 During a Bioblitz, naturalists, biologists and citizen scientists attempt to catalogue all the insects, invertebrates, mammals, birds, plants, fungi and lichens in a defined area.

Schumacher said that mammals on Douglas Island are not that well documented, and the BioBlitz is an opportunity to improve knowledge about which species live there and establish a baseline to monitor future changes in species distribution. The idea is to detect as many species as possible.

His strategy is to start with a list of Douglas Island’s reported but undocumented animals such as marten and bats. “Here are the animals we think should be here,” he said. “Let’s identify the preferred habitat and the best way to detect them. Then we go out, either with traps or just sighting the animals, and search from the alpine down to the beach.”

Animal signs, such as beaver-chewed sticks, will also be noted. “We don’t know if there are any beaver on Douglas now, but there have been in the past,” he said. “Beaver cuttings would be a pretty good indication.”

The event is a celebration of biodiversity as well, and an array of other activities for adults and kids will take place at the Eaglecrest lodge. A workshop on nature photography, a bird banding demonstration, and a saltwater touch tank are among the attractions, said Kristen Romanoff of the Alaska Department of Fish and Game.

“We’ll have dive teams and they’ll bring up species that are hardy and resilient and can be transported and shared with folks attending the event,” she said. “Divers will also get underwater footage and we’ll be able share it back at the lodge, so we’ll be able to see the area they’re exploring.”

Juneau Parks and Recreation Department is sponsoring a volleyball tournament with a twist – bioballs. Kids will be able to paint and decorate their volleyballs before the games begin.

“Trail Mix is doing work on the Fish Creek trail, and they’ll have an area where families can pitch in and get an idea about trail enhancement projects,” Romanoff said. “4-H is setting up a geocache, and they’ll teach people how to use GPS units. Geocaching is like a scavenger hunt using GPS units.” 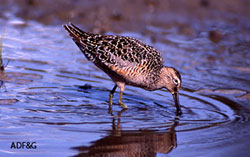 Birds such as this bar-tailed godwit will be identified and catalogued by Bioblitz teams on the coast. Teams will explore the alpine, forest, beach, tidal and subtidal zones for life.

Alaska Zipline Adventures will have the rainforest canopy zipline available at a discounted rate. Interested people should contact Zipline Adventures in advance to book a tour. Juneau Urban Forestry Partnership will have a tree identification game geared for kids. Local musicians will perform and lead songs in celebration of biodiversity. A barbecue at the lodge with food provided will wrap up the day’s festivities on Saturday. The final tally of all the species discovered during the BioBlitz will be announced at the closing ceremony at noon on Sunday.

Vans will provide transportation from the Eaglecrest lodge to the various survey sites, so participants can simply meet at the lodge.

Blejwas would like to see this become an annual event.

“We’re hoping we can hold this every year in various communities around the region,” she said.

“I’m excited to learn more about terrestrial invertebrates, but I want to do everything possible,” she said. “I’m going to take some bat detectors out and do nighttime surveys, probably along the Fish Creek drainage.”

BioBlitz is a collaboration between the Alaska Department of Fish and Game, the U.S. Forest Service, the U.S. Fish and Wildlife Service, the National Oceanic and Atmospheric Administration, the City and Borough of Juneau, and a variety of non-governmental organizations such as Gastineau Guiding, Juneau Audubon, Discovery Southeast, and Trail Mix.

Members of the public are welcome to accompany the teams on their surveys – a schedule will be available shortly before the BioBlitz begins.

For more information, contact Karen Blejwas at the Alaska Department of Fish and Game at (907) 465-4328 or email: karen.blejwas@alaska.gov.

Riley Woodford is writer for the Division of Wildlife Conservation ast the Alaka Department of Fish and Game. He is the editor of Alaska Fish and Wildfe News and produces the Sounds Wild radio program.