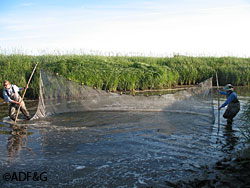 Researchers use a net to capture smolt and other organisms on the Anchor River.

Do Kachemak Bay estuaries play an important role in the lives of coho salmon? Scientists are working with smolting salmon to help us understand and better manage one of Alaska’s most important resources.

Estuaries are recognized as very productive ecosystems, but the variety of estuary habitats and how they influence developing animals are not well understood. Scientists from the Kachemak Bay Research Reserve and the University of Alaska Fairbanks are investigating characteristics of coho salmon during their use of estuary habitats in the Anchor and Fox Rivers in south-central Alaska. The idea of this work is that coho salmon that use many different habitats in estuaries will show a wide range of traits such as body size, age structure, and body fat when they enter the ocean. Specifically, we expect that a greater range of environmental conditions such as salinity, temperature, and the frequency of tidal flooding will cause a wide range in salmon traits of the fish that use these habitats.

Why should we care? Because a wide range of these three traits of the smolting salmon is very important to their survival in the ocean. Ocean conditions change from year to year, changing the best time, body size, and body fat levels that smolt require to survive. So a population of salmon that has a wide range of these three traits will better equipped to survive through the year to year changes in the environment. The process of a species showing a wide range of traits is called ‘bet hedging’ and is a bit like gambling because only one combination will survive in a given year. Think of a game of roulette: salmon populations that have more traits can place their bets on more numbers and will most likely win; but on the other hand, salmon populations with fewer traits are left placing their bets on fewer numbers … and we all know where that can lead. Understanding the role that estuary habitats play in the development of these traits can help people, such as resource managers improve their land use decisions, and develop policies to help salmon populations ‘hedge their bets.’ 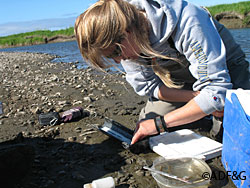 The author, Tammy Hoem, measures a salmon smolt on the bank of the Anchor River.

Scientists started learning how smolting salmon use the estuaries in the Fox and Anchor rivers during the summer of 2009. Fish were captured using beach seine nets in a variety of habitats in the estuary area from high to low tide lines. Data was collected for the habitat conditions including temperature, salinity, and depth. The fish captured were counted and their length was measured. The goal of the first year of the project was to identify where and how juvenile salmon could be captured in the estuaries. Scientists found several interesting clues about the use of estuaries by salmon, including presence of smolt from May through September.

A young coho salmon, or presmolt, from the Anchor River.

The 2010 and 2011 seasons of this project will focus on collection of data from adult and juvenile coho salmon. First, scientists will collect data that allows them to examine the influence of environmental conditions on smolt size, body fat, and age. Smolting salmon will be captured in channel habitats spaced between the high to low tides lines within a single estuary. Second, they will compare the range of expressed traits such as patterns of estuary use, body length at marine entry, and age composition between adult fish returning to both estuary environments.

Scientist chose to compare the Fox and Anchor estuaries because they represent different environments that could result in differences in run timing, abundance, fish size, and age structure. The traits of these runs might need different approaches for harvest times and land use practices. We need to understand the kinds of environmental pressures and the traits that they cause among different stocks within salmon populations in order to best manage and conserve our salmon.

Tammy Hoem is a PhD candidate at the University of Alaska Fairbanks and is a Graduate Research Fellow at the Kachemak Bay Research Reserve.