Your Cousin the Sea Squirt 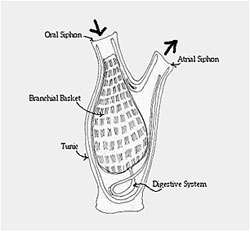 An adult tunicate or sea squirt. Drawing by Anna Epelbaum.

You may not have seen a tunicate unless you’re an avid tide pooler, a scuba diver, or you spend a lot of time checking out growth below the water line on docks, rocks, and pier pilings. Tunicates, or sea squirts, as they are commonly called, live as solitary or colonial organisms. There are about 90 native tunicates species from Alaska to California; however, I am more interested in those that are introduced to Alaska and are invasive.

First, let’s explore what a tunicate is. You might be surprised that tunicates are actually the closest relative to humans compared to other invertebrate animals. Tunicates are members of the phylum Urochordata, which is closely related to the phylum Chordata which includes all vertebrates. Tunicates and vertebrates share characteristics such as a dorsal nerve cord (spinal cord in humans), a skeletal rod underneath which supports the nerve chord, called a notochord (a spine in our case), and a pharnyx that develops gill slits.

As adults tunicates appear in many bright colors, almost sponge-like with an incurrent siphon and an excurrent siphon. Larval forms are very different from adults as they are shaped like tiny tadpoles with a notochord in their tails. They also have a hollow dorsal nerve chord and pharyngial gill slits. Since only the pharyngial gill slits are retained after the animal undergoes metamorphosis from the larval form to the adult, these organisms are classified as Urochordates. Nevertheless, all of the organ systems of higher vertebrates are present, including specialized sensory organs such as eyespots to detect light and an otolith to sense gravity. Okay, so maybe your cousin just acts like sea squirt.

The name “tunicate” comes from the firm but flexible body covering called a tunic, which the organism makes by secreting a thick covering of a substance similar to cellulose. A tunicate is shaped somewhat like a barrel. Most tunicates live with the lower end of the barrel attached firmly to a fixed object and its two siphons projecting from the upper end. Adult sea squirts are generally benthic (live on the bottom of the ocean) and sessile (attached or non-moving) marine filter-feeders. 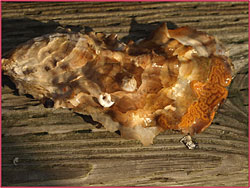 The orange organisms on the left are a colony of Botrylloides tunicates.

Tunicates subsist on plankton. They draw seawater in through the oral siphon, passing it through a sieve-like structure called the branchial basket where the gill slits filter food particles and oxygen, after which the water is expelled through the atrial siphon along with bodily wastes.

I’m interested in tunicates that were brought to Alaska waters in ballast water or as hitchhikers on the hulls of ships. The non-native tunicates that have been found in Southeast Alaska are colonial Botryllid tunicates. So far they’ve been detected in marine environments around Metlakatla, Ketchikan and Sitka. Botryllid tunicates can be mistaken for other sessile, encrusting marine animals such as sponges. Look closer and you can see tiny, individual openings (siphons) indicating separate organisms, each one is known as a zooid. The entire tunicate colony shares a common tunic. Like many invertebrates, colonial tunicates practice sexual reproduction; they can also multiply by cloning from a single sexually produced individual, called budding. This type of reproduction can produce viable new colonies that can drift away from the colony and easily spread across the sea floor. You can see why colonial tunicates are considered a greater fouling challenge than solitary tunicates.

Non-native tunicates are considered invasive because they have potentially irreversible impacts on marine ecosystems. The World Conservation Union rates aquatic invasive species as one of the four greatest threats to the world’s oceans. As fouling organisms, tunicates grow in large mat-like colonies on hard substrates such as rock, boulders and gravel, and on artificial substrates such as boat hulls, docks, and aquaculture gear. They can outcompete and suffocate filter feeding bivalves such as mussels, clams and oysters, and have very few natural predators.

In order to better understand the population of tunicates that have been detected in waters around Sitka, the Alaska Department of Fish and Game (ADF&G), National Marine Fisheries Service, the Smithsonian Environmental Research Center (SERC), San Francisco State University (SFSU), Sitka Tribe, Sitka Science Center and University of Alaska, Southeast, among others organizations, will join volunteers from the area for a BioBlitz the weekend of June 11- 13, 2010. We’ll join forces to scout out tunicates in Sitka harbors and along the coast where accessible by the road system. 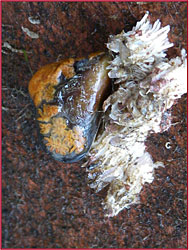 A Botrylloides tunicate colony on a shell.

Individuals will be asked to hit the beaches and shoreline during low tide, to walk the docks and piers, and scope out any area where these tunicates might be found. The goal is to learn about the distribution of the tunicates and to take samples wherever they are found so they can be genetically identified. Experts in the field of tunicates, Linda McCann of SERC and Sarah Cohen of SFSU, will be helping with the effort. Along with Greg Ruiz, the Director of SERC’s Marine Invasions Research Lab, McCann and Cohen have been looking for tunicates in Alaska for ten years. The Sitka BioBlitz will be the first focused effort to describe the distribution of tunicates in an Alaska community. Troy Tydingco, ADF&G, and other local volunteer scuba divers will be offering their skills to scan the seafloor.

Presently, most of the surveying for tunicates is done by volunteer citizen scientists who hang PVC plates attached to bricks from harbor floats, piers, or any place tunicates might have dropped from the hull of a fouled vessel. If present in the area, the tunicates will tend to collect on the PVC plates that dangle one meter from the surface of the water. This summer 14 sites from Ketchikan to Dutch Harbor will be monitored by teachers and students, or interested “citizen scientists” for invasive tunicate populations.

If you’re interested in joining us in Sitka, or in participating in citizen monitoring, please call Tammy Davis on the invasive species reporting hotline: 1-877-INVASIV (1-877-468-2748).