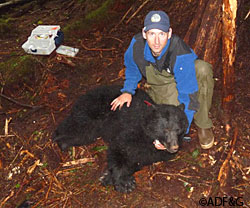 The author, biologist Steve Bethune, with an immobilized and collared black bear on Prince of Wales Island in southern Southeast Alaska.

Unlike many areas of the state where black bears are numerous and ADF&G wildlife managers are trying to reduce their numbers to bolster moose and caribou populations, managers of black bears on Prince of Wales Island (POW) are seriously concerned about apparent declines.

Historically, hunters harvested an average of 225 black bears annually from this large island in southern southeast Alaska. Word got out that POW was a consistent producer of trophy class black bears and beginning in the late 1990s harvests began to dramatically increase, peaking at nearly 500 animals in 2005. Since then the harvest has steadily decreased every year. During the 2008 regulatory year hunters reported harvesting 292 black bears from Unit 2.

Along with declining harvests, managers noted declines in average skull sizes and ages of harvested bears (in certain locations), all indicators of a struggling population. But it’s not just biologists who are concerned. Local residents, hunting guides, tour operators, transporters, local hunters and other members of the public are increasingly concerned about chronic low bear numbers compared to just 10-15 years ago.

To address this problem, managers studied harvest records and discerned a striking difference in the black bear take between the spring and fall seasons. In the spring, 85-90 percent of the black bears harvested are males. In contrast, fall hunters take an average of 50 percent females.

There are several reasons for this disparity. In the spring, the two most popular hunting methods are 1) using a skiff to search tidal flats, and 2) using bait to attract a bear. Both methods give the hunter an opportunity to view multiple animals and time to size up a bear before shooting. In the fall, hunters converge on salmon streams where bears are concentrated foraging on salmon. By September, when hunting season starts, we suspect many mature bears have moved off the streams allowing more females and young bears to use this food resource. Hunting along salmon streams can be a close-quarters affair and hunters may not have time to adequately judge a bear or observe it long enough to detect cubs. The potential for wounding loss is high, because bears that are shot can quickly escape into the thick forest adjacent to salmon streams, making it difficult for the hunters to recover them. When all these factors are combined it is easy to see that fall hunting has the potential to seriously impact the female segment of the black bear population. 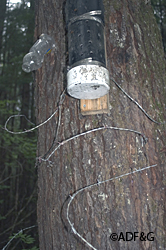 A hair snare with an attractant. A bear drawn to the scent lure will leave hair on the barbed wire, undisturbed and unaware it has just been sampled. The hair (specifically the hair follicle) provides a wealth of information for biologists.

In an effort to curb the apparent population decline, managers have addressed the fall harvest in an attempt to reduce the loss of female bears. A number of options were considered, but the selected tool was to establish a controlled use area encompassing Game Management Units 2 and 3. The use of motorized vehicles for bear hunting is restricted in this area during September, beginning in 2009. It appears to be working. By severely limiting access to salmon streams, the female portion and overall fall harvest is down about 40 percent. Only time will tell if this trend will continue and if a positive corresponding trend to the overall population will develop.

Unfortunately it’s nearly impossible to determine population size of bears in southeast’s coastal rainforest habitat. Until the 2009 season only hunters that actually killed a bear were required to report to ADFG, providing no information about the number of hunters visiting POW or their success rates. Biologists are currently working on a number of projects to learn as much as they can about POW’s bears.

In one study, hair snares have been deployed across the island to collect DNA samples. By comparing DNA collected in the field with DNA from harvested bears, a harvest rate can be calculated. This can then be converted to arrive at a rough population estimate.

In another study biologists are collaring bears with VHF and GPS equipped collars, allowing them to track and learn about their habitat use, den sites, reproduction, survival and movement patterns. 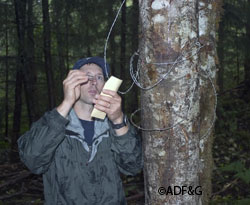 The author removes a hair sample from the snare. Hair snares are one of several tools biologists are using to learn more about black bears.

Finally, a graduate student sponsored by ADFG will be collaring deer fawns on POW beginning this spring. Biologists are hopeful the multi-year project will yield valuable information on the role of black bears on deer predation.

Across southern Southeast Alaska, black bears are attracting a lot of attention - everyone from hunting guides and transporters to non-resident and resident hunters, lodge owners, tourists, travelers, local residents, and especially biologists. Whether you are on Prince of Wales Island, Kuiu Island, or anywhere from Ketchikan to Petersburg to Juneau, black bears are a common presence. In recent years however, biologists with the Alaska Department of Fish and Game have detected declines in harvest in certain areas that have them concerned enough that learning more about this species has become paramount.

A big step was taken during the fall 2008 Board of Game meeting when ADF&G sponsored a proposal to require the use of a harvest ticket and report for all black bear hunting in Southeast Alaska beginning in July 2009. This requirement allows the Department to gather data not only on successful hunters as in the past, but also on hunters who are unsuccessful. This will allow biologists to begin compiling data on black bear hunter effort and success.

Along with this, the Department may also use the database from harvest tickets and contact hunters for additional information if needed. The Department is presently drafting a black bear newsletter that will be sent to hunters, guides, other agencies, and be available to the public on-line as well as at ADF&G offices. This newsletter is the first stage of an information sharing and gathering exercise by the Department to help guide black bear management into the future.