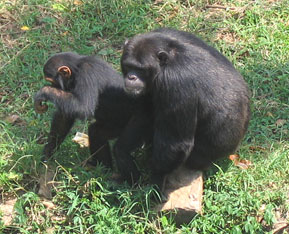 Chimpanzees in a zoo in Africa. Photo by Nancy Long

Alaska will essentially be a monkey-free zone, thanks to recent actions by the state Board of Game

I can appreciate the attraction of an exotic pet. When I was a 10-year-old kid in Oregon I desperately wanted an ocelot. An ocelot seemed like a super-cool giant housecat. It never occurred to me it might deliver dead opossums and raccoons to the doormat. Or that it could trash the house and go feral. My folks nixed the ocelot so we had tabbies instead, and between cats we had parakeets, and turtles and fish and a rabbit. And a foot-long alligator that we had to turn loose when it got too big – I still remember crying as it crawled into the storm drain. Actually it died in the terrarium, because alligators don’t make good pets either.

There are a limited number of animals allowed as pets or as domestic animals in Alaska, and chimpanzees were on the “clean list” until last month. This list includes traditional pets – dogs, housecats, hamsters, guinea pigs and such – and farm animals such as swine, fowl, horses and goats. It includes some unusual animals such as one-humped camels, alpacas, llamas, ferrets and African pygmy hedgehogs.

Chimps were pulled from the list for a number of reasons, according to biologist Tom Schumacher of the Alaska Department of Fish and Game. Schumacher deals with permitting issues for Alaska’s animals: captive wild animals, falconers who hunt with birds of prey, research animals, exotic pets and related issues.

Chimps pose a potential danger to their owners and to the public, he said.

“There are a number of cases where pet chimps or trained chimps have injured people, sometimes very seriously,” he said. “There are disease concerns. They are closely related to humans and can transmit a number of diseases to us. There are concerns about the ability of people to care for them – Alaska is probably not a good place to have a chimp – just in terms of their physical needs. They are intelligent, social animals. They can live more than 40 years, and a lone chimp sitting in someone’s house, that’s not a good life in terms of humane care standards.”

On the same grounds, the Board of Game also rejected a proposal to add capuchin monkeys to the clean list. These are the little “organ-grinder” monkeys. “Even a small monkey is strong, and they have big teeth,” Schumacher said. “And there are significant disease concerns with them as well.”

Alaska is not alone in addressing concerns about pet monkeys. Schumacher said there is a trend worldwide in restricting ownership of primates. There’s a bill moving through congress now to restrict importation and interstate commerce in primates.

Although many of the pet monkeys in the U.S. are bred from captive colonies derived from research stock, chimpanzees, and most of the other great apes are endangered, and worldwide, the pet trade is considered to be part of the problem.

“Someone could claim they needed to bring their pet python into a restaurant, or on an airplane, because it was their service animal,” Schumacher said.

Business owners are not allowed to ask what services the animals perform, what a person’s disabilities are, or for any documentation. The kinds of animals allowed as service animals are now being clearly defined – dogs and common domestic animals trained to do work or perform tasks – and excludes wild animals (including non-human primates born in captivity), reptiles, rabbits, farm animals (including any breed of horse, miniature horse, pony, pig or goat), ferrets, amphibians and rodents. Addressing this vagueness eliminates the possibility that someone could claim they need a state permit for a pet monkey because it was a service animal.

Many countries have outlawed chimp ownership, even for research, but in the U.S. that’s left up to the states. Some states do allow chimpanzees as pets, although some states require a financial bond from the owners. There is a bright spot here for Alaska monkey lovers – Alaska chimp owners will not be asked to give up their pets. Existing chimps are grandfathered in, but will not be allowed to propagate.

Riley Woodford is an information officer with the Alaska Department of Fish and Game, and the editor of Alaska Fish and Wildlife News. He has two Maine Coon cats and seven fish.