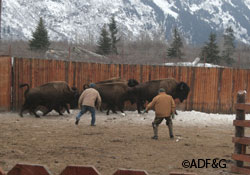 Moving the wood bison into the the chutes.

Wood bison cow #36 moves forward through the series of chutes. Like clockwork, heavy steel gates are slid open and closed by team members to allow her to pass to the scale.

Dr. Robert Gerlach, state veterinarian, nods his head, and the final gate is opened to let cow #36 leave the scale and enter the hydraulic squeeze chute where she is held safely. There a team of veterinarians, technicians and wildlife biologists gives her an anti-parasite injection and checks a skin test that was administered two days prior.

Wood bison (Bison bison athabascae) at the Alaska Wildlife Conservation Center (AWCC) are destined to be released as part of Alaska’s wood bison restoration project. Although the subspecies is native to the state, they disappeared during the last few hundred years. Alaska has been working with the Canada’s Wood Bison Recovery Team and many others over the past 15 years to design the restoration program. ADF&G has identified three potential areas for release: Yukon Flats, Minto Flats, and the lower Yukon/Innoko River area. Final decisions about location and time frame for the first release are being reviewed and will be announced within the next year.

AWCC hosted a team of about 30 workers at the center Jan. 31 through Feb. 5, including representatives of ADF&G, the State Veterinarian’s office, the USDA, and AWCC. The crew successfully ran the 82 wood bison through the handling system to complete some of the final health screening required during their two year quarantine.

“To finish the tests, each animal had to be handled twice within three days,” said wildlife planner Randy Rogers. “That takes a lot of team work to keep people and the bison safe, and to keep stress levels as low as possible for the animals.”

The wood bison at AWCC are descended from 13 obtained in 2003, and 53 animals which arrived from Elk Island National Park, Canada in 2008. Administering an extensive health testing regime was included in the protocol for importing wood bison from Canada and for releasing in Alaska. The health testing, led by Division of Wildlife Conservation Veterinarian Dr. Kimberlee Beckmen, was to alleviate concerns about the possibility of diseases being transmitted from the wood bison herd to other wildlife populations or to domestic livestock. 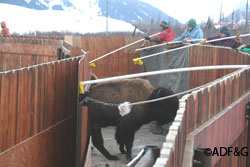 Moving the wood bison through the chutes in preparation for examination.

“We have not found any signs of bovine tuberculosis or brucellosis which are the two main diseases of concern in the wood bison,” Rogers said. “Pregnancy test results indicate that 10 or more calves are likely to be born this spring,” he added.

So that veterinarians could administer tests and read results, AWCC Director Mike Miller, who cares for the wood bison on a daily basis, put 30 to 40 animals into a large corral each day. In perhaps the most dangerous aspect of the handling, Miller and Biologist Todd Nichols entered the corral on foot and split smaller groups off the herd and drove them into a series of compartments leading to the single file chutes. Other staff watched individual animals to keep Miller and Nichols safe. Other staff stayed mostly hidden behind the fence, keeping conversations short and quiet so as not to excite the bison any more than necessary.
“Even though the bison are fenced and fed by humans, these are wild animals,” Miller explained. “Being close to humans is very stressful, which can lead to refusal to enter the chutes, or injury to either animals or staff.”

Concern for the well-being of animals and staff also led to tranquilizing seven of the largest bison rather than running them through the chutes.

“The larger bulls and one large cow were too aggressive to risk trying to move them. Some of these bison were well over 2,000 lbs. It was safer both for them and our crew to dart them, give the tests, and then reverse the tranquilizer,” Rogers explained. Blood tests on all of the tranquilized animals showed very low stress levels.
The wood bison restoration project has been pursued for 15 years by ADF&G, when former-Yukon Flats Area Biologist Bob Stephenson first presented the idea. Stephenson contacted Canadian authorities involved in wood bison conservation and learned the history of efforts to perpetuate the species in North America. He led studies to discover extensive bison habitat in several parts of the state. Stephenson arranged for skulls and bones unearthed in different parts of Alaska to be carbon dated and found that there were dates ranging through the last few thousand years, with the most recent estimated to have lived about 170 years ago. From Native elders on Yukon Flats and elsewhere, he also collected oral histories which detailed how the animals were hunted for food and hides by Athabascan people. 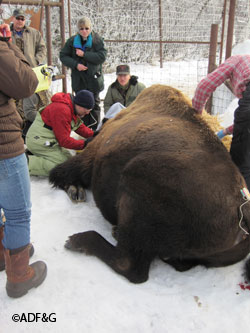 Veterinarians work on a tranquilized bull.

The bison restoration program has been supported by Native organizations, conservation groups, environmental organizations, and businesses throughout the state and nation. Financial support and in-kind donations to transport, contain, feed and care for the bison have been received from the Ted Turner Foundation, Safari Club International (SCI), the Alaska and Kenai Chapters of SCI, Carlisle Transportation Systems, AWCC, and many others. Private funds and contributions have been matched with federal dollars through the State Wildlife Grant program.
In Canada, First Nation residents of villages near wood bison herds as well as other Canadians benefit from having a local source of food. Some benefit financially by guiding hunters from urban areas. “We need to ensure that local hunters, non-local hunters and wildlife viewers all have opportunities to benefit from wood bison restoration in Alaska,” Rogers said.

Canadian biologists have helped restore wood bison in several parts of that country and have trans-located wood bison to Siberia. They developed a “soft release” technique that will be used in Alaska.

The animals will be transported to the eventual release site in early spring while snow is still on the ground. There they will be held and fed hay within a fenced enclosure for six to eight weeks, allowing them to acclimate to the area. As the snow melts and natural forage vegetation becomes abundant, biologists will leave the gate open, allowing the animals to wander out and disperse on their own. After the herd has dispersed, the fence will be removed.

“We have a bunch of work to complete before the bison can be released. We are working with the U.S. Fish and Wildlife Service to develop special regulations under the Endangered Species Act to designate wood bison in Alaska as a ‘Nonessential Experimental Population.’ We’ll also need to work with local residents and others to develop cooperative management plans,” Rogers said. “ADF&G staff hopes some of these bison can be roaming free within the next two years.”

Authors Cathie Harms, Randy Rogers, Bob Stephenson and Rita St. Louis are ADF&G biologists and staff with interest or expertise in bison. All participated in the "bison roundup" in early February