A protective mother moose guards her calves. The calves were trapped in the basement of this unfinished house, and events unfolded that inspired the use of the Taser as a potential tool to manage wildlife in some situations.

Law enforcement officers have long used Tasers, generally known as electronic control devices, to safely subdue humans. But what about using them on wildlife?

Some wildlife managers might have wondered about the concept, but until recently no one had seriously investigated using the electronic immobilization guns as a wildlife management tool.

That attitude now could be changing due to groundbreaking work by Larry Lewis, a wildlife technician with the Alaska Department of Fish and Game in Soldotna.

Lewis’ work investigating the use of Tasers on wildlife, done in collaboration with other Alaska Department of Fish and Game biologists, appears to hold promise for adding Tasers to the tool kit of options used by modern wildlife managers.

So far, “This is proving to be a good and useful tool,” Lewis said. “We’re going to keep working on it.”

Lewis said he began his experimental work several years ago after a harrowing experience with an angry moose and a Taser gun prompted his curiosity.

Lewis teamed up with other Fish and Game staff, including veterinarian Kimberlee Beckmen, research biologist Tom Lohuis and wildlife management biologists Neil Barten and Phil Mooney, to study the effect of Tasers on bears and moose.

Based on positive results from that work, Lewis has since attended Taser International’s instructor, armorer and master instructor courses, written a state operating procedure for Taser use on wildlife and received approval to train department staff to use Tasers in limited circumstances.

Fish and Game appears to be the first state wildlife agency in the country that has experimented with using Tasers for wildlife management.

Lewis said the concept was met with skepticism and resistance at first, but appears to be slowly gaining some acceptance.

“This was seen as unknown and uncharted dangerous territory,” Lewis said. “But since we’ve started this it has garnered a lot of interest from other states and management agencies.”

Lohuis and Lewis both warn that it is “not a magic bullet.” But, they said, Tasers do appear to be a valid tool for some situations.

In November, Lewis presented the idea of using Tasers on bears to a group of wildlife mangers who deal with human-bear conflicts at a conference in Canmore, Canada. Much to his surprise, no one scoffed at the idea. Instead, most managers appeared excited that Tasers might become another possible non-lethal tool available to managers who deal with human-bear conflicts.

Lewis said he first became interested in the subject in June of 2005 when an Alaska State Trooper asked for his assistance with an ornery cow moose.

“I had an epiphany while being chased by an angry moose,” Lewis said.

The cow moose was upset because her two calves were trapped in an open four-foot deep basement foundation at a home construction site. She would not leave the area, even when Lewis tried using noisemakers and rubber shotgun ammunition.
Finally, Lewis said he tried to drop a ramp down into the pit so the calves would be able to walk out on their own. But when he approached the calves, the cow moose charged him, jumping into the foundation, across it and back out.
It then chased Lewis and the trooper three times around the patrol car. 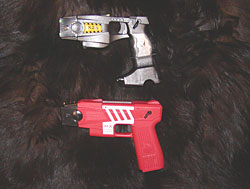 The X26 Taser designed for use on people, and the MX26 which is designed for animals and delivers a more powerful charge.

Both men were armed but rather than shooting the moose, Lewis said the trooper used his Taser to shoot at the moose across the hood of the patrol car. The Taser’s barbed, conductive leads hit the moose in the left front shoulder. Stunned and immobilized, the moose hit the ground immediately. The leads pulled free as the moose fell and it quickly ran off into the woods, staying there long enough for Lewis to extract the calves from the basement and for both Lewis and the trooper to retreat safely to the patrol car.

It worked so well on the moose, Lewis began wondering if Tasers might be used in similar circumstances with moose, and in other situations, with bears or other animals.

Working with Lohuis and Beckmen, Lewis studied the effects of Tasers on about a half dozen captive moose at the Moose Research Center in Soldotna. He is also working with Taser International to improve a design of the non-lethal weapon for use on wildlife.

To evaluate how the Tasers affected the moose, Beckmen took blood samples and studied stress in the animals before and after they were hit with Tasers.

“It’s not without cost to the animal,” Lohuis said. “But that stress doesn’t appear to be long-term. Our blood samples indicated the moose started to return to normal within 20 to 30 minutes compared to the 24-48 hours it takes a moose to recover from being drugged."

The animals also did not react aggressively after being hit by Tasers. Instead, they fled.

Lewis said Tasers have been used safely on humans for many years and are considered a “non-lethal” weapon. They work by zapping a person or animal with high voltage but low amperage electricity, much like an electric fence. That zap causes involuntary muscle contractions, essentially freezing them up, but does not affect the central nervous system. So people or animals can still breath and think but can’t move.

The later work on bears showed that Tasers may also have some success on bruins as a hazing tool. A variety of electronic control devices were shot at two collared brown bears that commonly visited the Yakutat dump.

After being shot at with the Tasers, the bears did not react aggressively but instead retreated quickly from the area. They did later return to the dump but showed a greater aversion to people than before they were hit with the Tasers, Lewis said.

But how and when Tasers should be used on wildlife remains an open question. Lewis said he holds hope that Tasers might be used on moose for short-term incapacitation. For example, he recently used his Taser gun on a moose that had a chicken feeder stuck on its head. The Taser immobilized the animal for long enough to allow another biologist to pop the feeder off its head without having to drug the animal.

“It’s basically like an electric fence in your hand,” Lewis said. “It’s not a panacea, but just another tool for managers to use.”

Elizabeth Manning is an outdoor writer and an educator with the Divison of Wildlife Conservation at the Alaska Department of Fish and Game. She lives in Anchorage.