By Amber Bethe and Dean Hughes 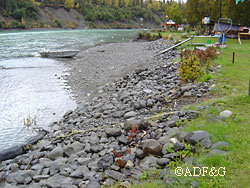 ADF&G has two programs to help protect and restore fish habitat - habitat restoration workshops and a cost share program for sustaining and rehabilitating fish habitat and riparian vegetation and function.

When the Yeasel’s built their home next to the Kenai River, nobody told them that stream bank erosion and channel movement were a natural part of the life of a river. They built their house and grew a lush, green lawn at the edge of the river. They enjoyed an idealistic setting where they could park their boat on the streambank, fish from the shore, and enjoy an unobstructed few of the river from the windows of their house.

“Most landowners do not understand that removing the vegetation near the rivers not only is harmful for the rearing and production of salmon and the functioning of the vegetated riparian areas, but, it also increases the chance of their waterfront eroding” said Dean Hughes, a habitat biologist for the Alaska Department of Fish and Game (ADF&G).

Almost immediately the Yeasel’s needed to stabilize their riverfront due to increased erosion from developing their riverfront and removing the native vegetation. They used rock riprap to harden the riverfront, a commonly used bank stabilization technique of the time that we now know is detrimental to rearing juvenile salmon. You can imagine their surprise after a major flood event in 2002, when the rock bank stabilization began to degrade and the streambank in front of their home began to erode again. Their house was safe for the moment, but if more erosion occurred it would be threatened. They didn’t realize until after the flood, that a healthy riparian zone could have protected their home and limited the amount of erosion considerably.

The riparian zone is the interface between land and a stream. The riparian zone along most streams in Alaska is tangled with a variety of wild vegetation. This layer of vegetation spreads a thick layer of roots through the soil, holding the vegetation and soil together and protecting the streambank from erosion. More importantly for the juvenile salmon, the riparian zone keeps the nearshore waters of streams cool with shade, maintains water quality by filtering impurities and sediment from entering the river, provides organic nutrients and terrestrial food sources to the river, and provides woody debris to the water that lowers water velocity close to the bank and provides escape cover. 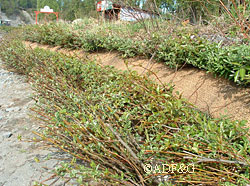 Willows along the riverbanks help stabilize the area against erosion.

Riparian and fish habitat can be easily damaged and lost due to human activities that occur in or near water or due to water usage. Human activities often result in changes to fish habitat big and small, in ways that are both obvious and subtle. The consequences may profoundly affect the many benefits that marine and freshwater fish provide to Alaska’s residents and visitors.

It was after this flood that the Yeasel’s learned of the Cost Share and Education Programs run by ADF&G. ADF&G has two programs to help protect and restore fish habitat: habitat restoration workshops and a cost share program for sustaining and rehabilitating fish habitat and riparian vegetation and function.

“Since 1995, the Alaska Department of Fish and Game has conducted habitat education outreach and rehabilitation of riparian vegetation and fish habitat on the Kenai Peninsula,” said Dean Hughes. In that time, ADF&G, with their program partner, the United States Fish and Wildlife Service (USFWS), completed over 430 projects in the South Central region.

The Cost Share Program was created to sustain and improve fish habitat. The goals of this program are to remove harmful structures such as jetties, bulkheads and riprap from waterbodies, maintain and protect healthy riparian and fish habitat, provide alternatives to traditional means of hardened bank stabilization, and rehabilitate damaged habitat. ADF&G partners with waterfront landowners to create fish-friendly bank stabilization projects that meet the goals of both the landowner and ADF&G. 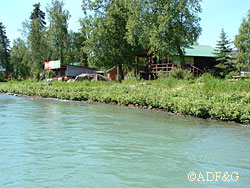 By working with ADF&G, the Yeasel’s were able to install a bank stabilization project on the shoreline of their property and protect their home. They revegetated the area with willows and other native vegetation, built elevated, light penetrating walkways so they could still access the river easily, and stopped maintaining a lawn that went all the way to the waters edge. Their waterfront now supports young rearing salmon, waterfowl, and lush riparian vegetation and improved the riparian function critical to the health of the Kenai River.

Although impacted riverbanks can be successfully revegetated and rehabilitated, we can not restore these riparian zones to their original condition. We can improve fish habitat, vegetation, and improve riparian function beyond the impacted state, but we should always try to leave rivers and streams to their natural condition.

Amber Bethe and Dean Hughes are habitat biologists with the sport fish division, based in Anchorage.