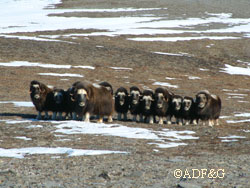 The population of muskox on the Seward Peninsula is growing. Photo by Sue Steinacher.

An animal once extinct in Alaska is making a terrific comeback–for now–as the number of muskoxen on the Seward Peninsula has reached levels that offer increased opportunities for both viewing and hunting.

The original muskoxen in Alaska died out in the 1800s, but a program to reestablish muskoxen on the Seward Peninsula has so far been extremely successful. Muskoxen from Greenland were brought to the University of Alaska in Fairbanks in 1930, and a small group transplanted to Nunivak Island in 1935-36, where they have thrived. In 1970, thirty-six of the Nunivak Island animals were transplanted near the Feather River, 36 miles from Nome. A second transplant followed in 1981, with the release of thirty-five more animals at the Port Clarence Coast Guard Station, 15 miles west of Teller. The latest count of muskoxen on the Seward Peninsula shows their numbers approaching 3,000.

With 300 miles of well-maintained gravel roads radiating out from Nome, the Seward Peninsula offers visitors a premier opportunity for viewing free-ranging muskoxen from the comfort of their car. The animals have become a familiar site for locals, who have taken up ‘qiviut picking’ in summer. People wander the tundra willow patches looking for snagged tufts of the superfine muskox undercoat to be spun and knitted into articles of clothing, or simply stuffed into the toes of winter boots for extra warmth. Contact the Nome Visitor Center (www.nomealaska.org), for more information on visiting Nome to view muskoxen.

Not everyone has been thrilled with the increased number of muskoxen. Some local residents are unhappy their preferred berry-picking and wild-greens gathering sites sometimes get trampled, and village graveyard crosses get knocked over by animals using them as scratching posts. Some also feared muskox and reindeer would compete for good range, and muskoxen would displace caribou from traditional hunting areas, although these problems are not known to occur. 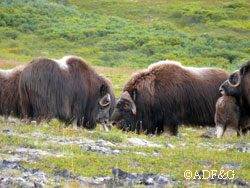 Management of muskox on the Seward Peninsula is a cooperative effort. Photo by Sue Steinacher

As muskox numbers increased, local residents and managers began to consider the possibility of allowing limited harvests while still providing for viewing as well as further growth and expansion of the Seward Peninsula muskox population. This lead to the formation of an ad hoc group now referred to as the ‘Seward Peninsula Muskox Cooperators.’ The ‘Cooperators’ are an informal group: they have never established voting chairs, selected specific individuals as representatives, or adopted any type of charter. Instead, residents of each community on the Seward Peninsula along with state and federal agency staff have comprised the core of this group. Additionally, individuals representing the Board of Game and nonlocal resident hunters have attended cooperators’ meetings as well. In the early 1990’s this group developed a muskox management plan that considered multiple uses of muskoxen, and since that time the group has provided a number of regulatory proposals to the State Board of Game and Federal Subsistence Board.

The Seward Peninsula muskox population increased 14 percent annually between 1970 and 2000, and annual growth slowed to 6 percent between 2000 and 2007. The increase in muskoxen since 1970 recently led to regulatory changes that moved the local subsistence hunt out of Tier II, thereby making subsistence hunting of muskoxen available to all Alaska residents on a registration permit basis. Hunters should be aware that because this is a subsistence hunt there are significant trophy destruction requirements for Game Management Units 22 and 23. For those seeking a trophy hunting opportunity, a designated number of animals can be taken through a drawing permit system with a $500 tag fee. Contact the Nome Fish and Game office for more details on hunting options and regulations (1-800-560-2271). 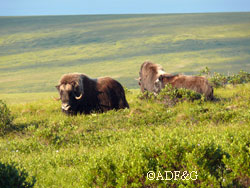 Muskox died out in Alaska in the 1800, and reintroduction efforts in the 1930s reestablished the animals in Alaska. Photo by Sue Steinacher.

Muskoxen on the Seward Peninsula are being monitored by state and federal biologists. Since 1992, the entire population has been censused every two to three years and, in many years, additional surveys were conducted to monitor calf production and survival, and proportions of bulls and cows in the population. During the 1980s, radio collars were used primarily to monitor the expansion of muskoxen into new ranges. Now, radio collars have been placed on a number of animals to enable biologists to track locations of the many small groups to collect information on group movements, birth rates, mortality and sex and age structure.

Despite their management efforts, biologists cannot predict with certainty how the animals will fare in the near and distant future. In northeastern Alaska, muskoxen recently crashed after twenty years of growth, for reasons still not fully understood. And, given the ecological uncertainties associated with climate change, cold-adapted species such as muskox may be at risk. Biologists will continue to monitor Seward Peninsula muskoxen closely, and make every effort to ensure that they will be an enduring wildlife viewing and hunting resource.

Sue Steinacher is an educator with the Division of Wildlife and is based in Nome.