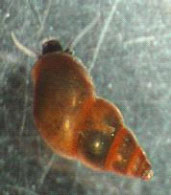 The key to keeping a potentially devastating invasive species from reaching Alaska is in the hands – and on the feet – of anglers. Fishermen and women coming to Alaska from Western States, or Alaskans fishing Outside and returning, need to learn about the New Zealand mud snail.

Plants and animals introduced to new environments can cause serious problems, ranging from damage to the environment and infrastructure, loss of recreational activities, and health concerns. Some invasive species have been introduced deliberately by people who did not foresee the negative consequences; others have been introduced by accident. So far, we have been quite lucky in Alaska. Alaska’s cooler climate and strict laws regulating the transport of live organisms certainly has helped, but there are many nuisance species that could easily find their way into Alaska and survive. The New Zealand mud snail (Potamopyrgus antipodarum) ranks very high on the “most unwanted” list of species.

New Zealand mud snails are tiny gastropods. Adults are just about 1/8” long. It is believed this small snail was accidentally introduced to the United States in shipments of trout eggs from New Zealand. The snail was first discovered in the Snake River in Idaho in the late 1980s. These snails are very prolific and form dense colonies. Its density in the Snake River now exceeds 100,000 snails per square meter in some areas. New Zealand mud snails have now spread throughout watersheds in Idaho, Montana, Oregon, California, and are also now found in the Great Lakes in the Midwest.

The New Zealand mud snail has a “trap door” in its shells which allows it to pass unharmed through the digestive tract of a predator such as a bird or fish. The snails are capable of living out of water for almost two months as long as they are on something moist.

Imagine if you were fishing down in the lower 48, packed up your gear and waders, flew home, and fished in Alaska a few days later. These snails are so small that, at first glance, they could easily be mistaken for gravel or other debris. Accidentally transporting just one is all it could take to introduce them because this species reproduces asexually. By being careful about inspecting and washing your gear, especially after traveling outside, you can prevent the spread of this species to Alaska’s waters.

Felt bottoms on wader boots are very popular for providing traction on slippery rocks. However, New Zealand mud snails easily attach to the felt. Several manufacturers of waders have recognized the concern over spreading aquatic invasive species and are now phasing out felt waders and developing new materials. Also, this past February, the Alaska Board of Fisheries made a decision to prohibit anglers from using felt wader boots in Southeast Alaska. This regulation will take effect in 2011 and is specifically aimed at preventing the spread of aquatic invasives.

Understandably, many anglers may be concerned about replacing their waders and finding an alternate material with good traction, but there are plenty of wader boots to choose from. Many manufacturers already make wader boots that are specifically designed to reduce their ability to accidentally transport live organisms. Most of these boots have some type of a rubber sole, and according to Mike Buntjer, a fishery biologist and avid fisherman, “Rubber-soled boots work just fine. The only difficulty is walking on ice in the winter, but you can get studded boots to help with that.” 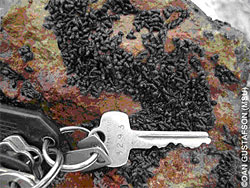 Not using felt wader boots can certainly reduce your chance of transferring aquatic invasive species, but there is still more you can do. Regardless of the type of wader boots you own, you should always clean all of your fishing gear after fishing, especially if you have been traveling or fishing in different water bodies. To properly clean your gear, first clean all of the mud and weeds off of it and then immerse it in hot water for at least five minutes, or use a mild disinfectant and soak it for the same amount of time. If you don’t want to do that, you can use a high pressure sprayer to clean your equipment and let it all completely dry out before using it again, or freeze if for several hours.

The good thing is that these snails are not in Alaska yet, and we can keep them out.
If we all take these precautions and do our part, we can successfully prevent invasive species introductions and protect Alaska’s ecosystems and fisheries!

Kristine Dunker is a Fishery Biologist with the Sport Fish Division and lives in Anchorage. If you ever find an unfamiliar species and are concerned that it might not be native, please report it to 1-800-INVASIV.