By James Fish and Travis Hyer 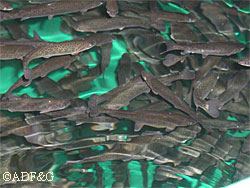 Rainbow trout at the experimental hatchery in Fairbanks.

The Fairbanks Experimental Fish Hatchery is a small scale, state-of-the-art facility near downtown Fairbanks. The hatchery began operation in 2004, pioneering and testing some innovative techniques and equipment designs, including new approaches to water treatment and fish rearing. The facility has had remarkable success raising traditionally hard-to-culture fish such as Arctic grayling, and has served as a pilot facility for design of the Ruth Burnett Sport Fish Hatchery (RBSFH), currently under construction in Fairbanks.

The Experimental Hatchery is operated by the Alaska Department of Fish and Game’s Sport Fish Division. Occupying warehouse space leased from Aurora Energy (owners of the Chena Power Plant), it was initially intended to test the feasibility of fish culture with local groundwater supplies. Rainbow trout, Chinook and coho salmon, Arctic char and Arctic grayling will be propagated at the future RBSFH to sustain stocked sport fisheries across Alaska’s Interior.

Initial rearing trials were conducted in the experimental hatchery with four 1.2 m3 (approx. 300 gal) tanks on flow-though water systems. In order to more closely replicate rearing conditions proposed for the RBSFH, two new rearing systems were installed during 2005. Both systems included 20 m3 (approx. 5300 gal) Cornell-style dual-drain tanks, each capable of producing 600 kg (approx. 1300 lbs) of biomass at desired fish densities. One system is designed for 95 percent water recirculation, employing a fluidized sand-bed biofilter for ammonia reduction, as well as UV filtration downstream of the biofilter. The second system is operated as a partial-reuse (75 percent) rearing system, without biofiltration. All fish produced from these systems have been stocked into Fairbanks-area lakes as part of sport fish enhancement programs.

Groundwater is used from nearby municipal drinking water wells to culture fish. However, the ground water has an iron concentration of 5 to 6.5 mg/l, and a manganese concentration of 0.7 mg/l. Initial studies at the experimental hatchery established that iron removal would be required for long-term fish culture. Thus, a water filtration system for iron and manganese removal is used to make groundwater suitable for fish rearing.

Studies involving histological examination of fish gills revealed tissue damage and iron deposition occurring with iron levels of 0.2 mg/l or greater in groundwater. However, fish gill tissue and physiology appeared normal and healthy when iron was 0.15 mg/l or less.

Rainbow trout raised at the experimental hatchery in Fairbanks are stocked into local lakes.

The water treatment system has gone through multiple refinements during the past 4 years, but is based on adsorptive media filtration using manganese dioxide ore, or pyrolusite. The system was expanded from single stage filtration to the current 2-stage filtration process. In this configuration, 90 percent or more of ferrous (dissolved) iron is removed by adsorption in stage-1, while the remainder is removed in stage-2.

Break-through was common in single stage filtration after filter backwashes, resulting in short durations of elevated iron concentrations in hatchery water. The inclusion of a second stage in the filtration process proved essential in preventing “break-through” events.

Recent design refinements, incorporating low-level potassium permanganate injection between the first and second stage of filtration, have allowed for manganese removal to drinking water quality standards. The idea was to introduce just enough permanganate for reaction with ambient manganese, whereby permanganate would be consumed in the process, with no residual remaining in the hatchery water. While we have raised fish in water containing 0.7 mg/l of manganese without injury to gill tissue or apparent toxicity to fish, manganese removal may be preferred as it may foul equipment after several months of use. This current system is capable of reducing iron to less than 0.05 mg/l and manganese to less than 0.05 mg/l, and was the basis of design for a similar water treatment system to be used in the future RBSFH.

Another goal of the experimental hatchery has been to rear local stocks of fish that are to provide gametes for hatchery propagation in the future RBSFH, as well as serving as a training facility for biologist and hatchery staff. In addition to both diploid and triploid rainbow trout from captive broodstock based in Anchorage hatcheries, biologist have successfully incubated and reared local stocks of salmon and Arctic grayling, with survival of most stocks exceeding 95 percent.

All incubation has been done without antifungal chemical treatments (a common fish culture practice), but still yielding very high survivals from green to eyed eggs. Rearing in recirculating and partial reuse systems resulted in very good fish growth, and fish were utilized for stocking into sport fisheries. No indication of impaired growth or survival based on water quality has been observed. 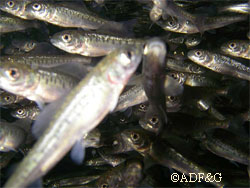 The hatchery has been successful with especially hard to raise fish such as grayling.

Some strains of fish have never been cultured for hatchery production, such as Chena River Chinook salmon, but have had high survivals while in captivity. Another stock, Delta Clearwater River coho salmon, displayed 96.5 percent survival during incubation, having a total survival from green egg to 3 g fingerling of 93 percent. Of particular note was the incubation and early rearing of Arctic grayling, which historically has been a difficult species to culture because of the lack of suitable commercial feeds for early life stages. During 2008, a two-week feed trial was conducted at the experimental hatchery where use of enriched Artemia spp. as initial feed for Arctic grayling yielded larval fish survivals exceeding 97 percent. (Artemia are freshwater brine shrimp used as a live feed, mimicking planktonic feed grayling would normally feed on in the wild.) Such survival is far greater than historical averages of 40 to 50 percent obtained in other Alaskan facilities. Continued survival and growth of Arctic grayling in a recirculating rearing system has remained high, even after a transition to dry commercial feed.

Long-term rearing of Arctic grayling in a 95 percent recirculation system is currently underway in the experimental facility. The use of recirculating technology in the future hatchery is expected to reduce water treatment and heating costs, making long-term fish rearing more affordable.

This year will be the last for operation of the experimental hatchery, as the RBSFH is expected to be open by mid-2010. The experimental hatchery will be removed from the warehouse, and some of the equipment will go to the new hatchery. Investigators will apply lessons learned from fish rearing and water treatment studies at the Experimental Hatchery to the operation of the future RBSFH, with the goal of producing healthy fish under manageable operating costs.