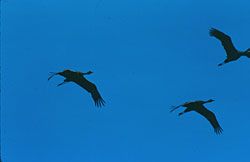 With the advent of autumn, V-shaped squadrons of migrating birds cut through the sky as they head south. Among the most impressive of these fall migrants are sandhill cranes, their distinct rattling call and six-foot-wingspans setting them apart from ducks and geese.

Cranes are superficially similar to our familiar great blue herons – both are long-necked, stately wading birds with pointed bills – but they are not otherwise related. Unlike herons, cranes come together in great flocks for migration and overwintering. In flight they are easy to distinguish: a crane flies with its neck straight, while a heron flies with its neck tucked in an S-curve.

The Pacific Flyway Population is much smaller, about 25,000 birds. The Pacific Flyway cranes nest further south, mainly along Bristol Bay and the Alaska Peninsula, Kodiak Island and around Upper Cook Inlet. Some of these cranes also nest throughout the muskegs of Southeast Alaska.

Sandhill cranes build a large mound of vegetation in water, floating or attached to vegetation, for a nest. They generally lay two eggs and usually only one chick (called a colt) survives the first year. Chicks are precocial and can walk and feed themselves within a day of hatching.

Mated cranes stay together year-round. Biologists believe that cranes mate for life. The birds can live to be 20 years old in the wild and longer in captivity. One lesser sandhill crane lived 61 years in the National Zoo in Washington, DC.

The Mid-Continent Population has received a lot of attention in Alaska for several reasons. These are the cranes most Alaskans see because there are so many birds and they nest over such a broad swath of the state. Members of this population rest and refuel at Creamer’s Field in Fairbanks during their spring and fall migrations, and at their peak several thousand birds can be seen. Fairbanks honors these birds with the annual Tanana Valley Sandhill Crane Festival each August. 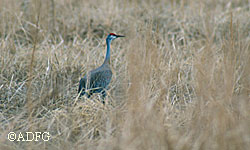 The Pacific Flyway Population is less well known, but not less interesting.

During the fall migration, the Pacific Flyway Population follows a coastal route in Alaska. The birds can cover 350 miles a day, making stops to rest and refuel near the Copper River Delta, Yakutat, Gustavus and the Stikine River Delta. Historically, their fall numbers usually peak in the second half of September in Gustavus as they make their way south.

At the Stikine River Delta, most of the cranes cut east through the mountains into interior British Columbia. Once inland, they fly south through eastern Washington and Oregon, eventually arriving in the Central Valley of California where they spend the winter.

A small group of Pacific Flyway cranes doesn’t travel into interior B. C., but continues south along the coast of British Columbia. These cranes enter Washington south of Vancouver, B. C. and continue south to their primary staging areas along the Columbia River near Portland, Oregon, where they remain from September through November. They then travel through the Willamette Valley, Oregon, to wintering areas in California.

Biologists hypothesize that the two separate migration routes implies there are two distinct segments of the Pacific Flyway Population, an “eastern” (interior route) and “western” (coastal route) segment. Some speculate that the “western segment” is composed only of cranes from the Cook Inlet region and that the Bristol Bay cranes take the interior route south. Others suspect that these coastal migrants are cranes that breed here in Southeast Alaska. 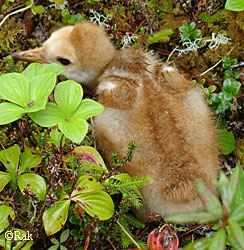 A young sandhill colt. A pair of adults with this recently-hatched chick was discovered in June on the southern Southeast Alaska mainland at Frosty Bay, on the Cleveland Peninsula. Paula Rak photo.

This summer, researchers captured ten lesser sandhill cranes near Homer and equipped them with satellite tracking devices. New technology allows the public to follow the movements of the tagged birds on a U.S. Geological Survey Web site. The Web address is http://www.werc.usgs.gov/. Click on the “satellite telemetry” tab, then the “Alaska Cranes” tab to learn more. Click on the “migration maps” tab to see where the birds are now. Click on the bird's identification number to see where it has been. The research project, led by Gary Ivey with support from Kachemak Crane Watch, followed the cranes as they moved around Kachemak Bay during the summer. You can use the Web site to join the researchers in tracking the birds’ migrations as they head south.

Riley Woodford is a writer with the Alaska Department of Fish and Game, and the editor of Alaska Fish and Wildlife News.