Marked sea lion = 465 lounges on a rock at South Marble Island in Glacier Bay in July 2008. This animal was marked in 2004 and has been sighted numerous times in northern Southeast Alaska.

On a blustery July day in Glacier Bay, about 50 Steller sea lions were hauled out on the rocks at South Marble Island. Amid the caterwauling and bellowing animals jockeying for position rested one placid male, a letter and a number on his left side, H 465.

Another marked male rested nearby, = 465. According to marine mammal biologist Lauri Jemison of the Alaska Department of Fish and Game, these are “northern boys,” young sea lions that favor northern Southeast Alaska. It’s a coincidence that both share the same number.

Steller sea lions are declining in western Alaska, but doing well in Southeast Alaska. Over the past decade, biologists have marked about 3,600 animals with identifying numbers. To learn how animals live and move about, it’s crucial to be able to identify who is who.

As the animals are re-sighted over the years, biologists get a picture of their movements and their fidelity to certain haulouts, rookeries, and feeding areas. They can also learn how long sea lion pups stay with their mothers, how long they depend on their mothers for nursing, and how often females reproduce. It’s also important to learn if sea lions are moving between Western Alaska and Southeast Alaska, since animals in these two areas are considered to be separate populations or stocks.

Biologist Lauri Jemison provided the backstory for these sea lions.

H 465 was born in June 2005 at the Hazy Islands, where Chatham Strait meets the Gulf of Alaska. The Hazy Islands are one of the four major sea lion rookeries in Southeast Alaska.

In the fall of 2005, the young pup accompanied his mother about 200 miles due north, up the long fjord of Chatham Strait, to Benjamin Island. Benjamin Island, about three miles north of Eagle Beach, is one of the major sea lion haulouts in Lynn Canal.

He spent the winter there and in the spring of 2006 he swam north another 45 miles to Gran Point, near the Katzehin River just south of Haines. Later that summer the one-year-old sea lion swam 100 miles south to Sail Island north of Petersburg, at the south end of Stephens Passage. Sail Island and the nearby Brothers Islands, sitting where Stephens Passage meets Frederick Sound, are well-used sea lion haulouts.

H 465 repeated this pattern in 2007 – he was in the north in the spring at Gran Point, and in June he was back at the southern end of Stephens Passage around the Brothers Island for the summer. In the summer of 2008 we find the three-year old in Glacier Bay, a 100 mile-swim to the northwest.

Biologists have captured and released about 375 juvenile sea lions in Western and in Southeast Alaska. (Adult sea lions are virtually impossible to capture, so biologists focus on the smaller, curious and more catchable juveniles.) Biologists collected genetic and physiological data from these animals, and some were equipped with tracking instruments. Because their birthplaces – their natal rookeries – are unknown, these animals are given a number preceded by an equal sign.

= 465 was first captured Feb. 21, 2004 at Benjamin Island. He remained there until early April when he headed to Gran Point. In the summer of 2004 he followed a pattern similar to H 465, heading to Southwest Brothers Island for the summer and coming north for the winter. 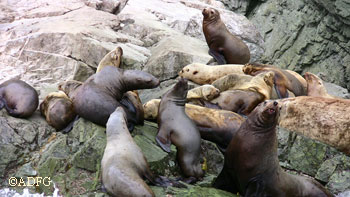 When he left Benjamin Island last summer, he swam farther west, all the way to the Outer Coast. He was seen in July 2007 at the Graves Rocks rookery, just north of Cross Sound. There were no sightings last winter. This summer, 2008, he was again in Glacier Bay.

Lauri Jemison and her colleagues are continuing their work studying the population dynamics of Steller sea lions in Southeast. They are also working to monitor and address the problem of sea lion entanglements in trash and fishing gear. Future sightings will reveal more about the movements and life of this – and other – Steller sea lions.

Riley Woodford is a writer with the Alaska Department of Fish and Game, Division of Wildlife Conservation. He is the editor of Alaska fish and Wildlife News, available online at http://www.wildlifenews.alaska.gov/