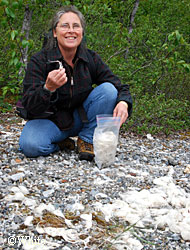 Southeast weavers are seeking wool for Chilkat and raven’s tail robes. The traditional art of weaving ceremonial robes and blankets is experiencing a revival, and Fish and Game biologist Kevin White, among others, has been working with Native weavers to help them acquire wool.

“I’ve gotten to know a couple of the weavers and they’re really interested in getting wool,” White said. “I think what they’re doing is important and fascinating. Especially the efforts to revive the raven’s tail style of weaving, which used mountain goat wool, and unlike Chilkat weaving, did not incorporate cedar bark.”

White is helping weavers connect with hunters. Hunters can donate entire hides to weavers, or portions of hides. Shed wool, which can sometimes be found in areas where goats congregate, is also prized. Anthropologists and personnel with Glacier Bay National Park have also been helping weavers collect shed wool in the park.

Weaver Teri Rofkar of Sitka has spent years collecting goat wool for weaving projects. She’s networked with “high ridgers” (alpine hikers) who send her shed wool they find. She’s gleaned wool from decomposed skeletons in the field and slipped wool and hair from rotten goat hides in her garage.

“The smell of a rotten goat hide is really memorable,” she said.

The wool must be separated from the hair. The wool is washed, the fibers are straightened and the wool is spun. The hair is not used. 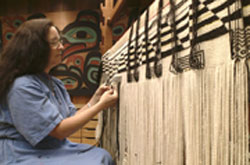 “I put the hair in the woods and all the birds in my neighborhood have white nests,” she said. “The hair gets used, but not by me.”

The beautiful white coat of a mountain goat in summer is mostly hair, with very little wool. Goats taken by hunters early in the hunting season – in August and September – don’t provide much wool. But later in the fall, goats develop a thick layer of wool under their hair.

Goats are at their woolliest in late winter and early spring, and this was probably the time when Native hunters traditionally pursued goats. Sources of meat are scarce in late winter, and goats will come down to lower elevations, making them more accessible to hunters.

Rofkar said commercial wool was introduced in the 1800s, and became popular with Native weavers because of the ease of use and the appeal of new materials. Buttons and beads were also integrated into Native art as they became available.

“Now the art of weaving is seeing a renaissance, and we’re using the commercial materials that are available,” Rofkar said. But amassing enough wool to make a robe entirely of mountain goat has been a long term goal for Rofkar. “It’s a symbol of the relationship with the place.”

“I think I've got enough to make a robe out of mountain goat,” she said, guessing she has about five pounds of wool. “I’ve been working on this accumulation for about 13 years.” 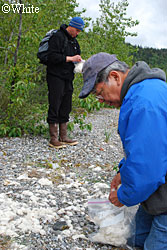 “That makes sense, they are both ice age animals,” she said.

Rofkar recently discovered another potential source of mountain goat wool – old hides. She used to think the tanning process rendered the wool unusable, but that’s not the case. “An old tanned hide, like that one your wife hates that’s been laying across the back of the couch, that you might be thinking of getting rid of, the wool can be combed out,” she said laughing.

Hunters who wish to donate hides, hikers that find wool and anyone with questions or leads for mountain goat wool can contact Rofkar or the Southeast Alaska Indian Cultural Center in Sitka. Rofkar can be reached at ravenart@alaska.net, and the cultural center is at 907-747-8122.

White added that there are weavers in Juneau, Haines and Klukwan, as well as other Southeast communities, and hunters may also wish to contact weavers in their own communities who would appreciate the wool.