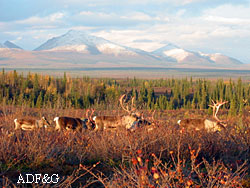 Every caribou on every photo taken of the Western Arctic Caribou Herd in a July 2007 photo census has finally been counted, yielding a new population estimate of 377,000 caribou – a decline of 113,000 animals since the last count in 2003. While concerned about the results, Alaska Department of Fish and Game caribou biologist Jim Dau is not convinced that it’s downhill from here for the herd. What he is sure of is that there is keen interest in whatever is happening with the state’s largest herd, which currently ranges from the North Slope to eastern Norton Sound, and the Chukchi Sea to the Koyukuk River.

Dau is pretty confident about the accuracy of the estimate. “We radio tracked collared caribou extensively from July through mid May and determined that almost the entire herd (99%) was present during the photography,” he said. “Photo quality was generally good, and we hired the most experienced caribou counter in the state to count the photographs. Also, the estimate is consistent with annual estimates of adult mortality and calf survival.”

The Western Arctic Herd numbered 242,000 caribou in 1970, and then plummeted to 75,000 by 1976. The herd steadily increased until possibly peaking at 490,000 animals around 2003. The loss of 113,000 animals from a herd of nearly half a million caribou in four years doesn’t entirely surprise–or alarm–caribou biologists, but they are definitely taking notice.

Dau, who has monitored the Western Arctic Herd since 1988, is still not sure whether the decline is the beginning of a downward trend, or the result of several recent mid-winter thaw-freeze events. “With the herd so high for so long, we’ve been waiting for the shoe to drop, but we may not necessarily be there yet,” said Dau.

In December, 2005, temperatures rose above freezing and rain soaked the snow cover for two days. “When cold temperatures returned, the herd’s winter range was encased in a thick layer of near impenetrable ice, and caribou died in droves,” said Dau.

A similar warming event in January 2007 brought four days of rain, and Dau anticipated another large die-off. Instead, the prolonged warming period, coupled with high winds, eliminated the snow cover and dried the surface vegetation. No subsequent ice crust formed and the availability of critical winter lichens actually improved. “It’s a fine line whether these thaw-freeze events are good or bad for caribou,” Dau explained. “Weather–both summer and winter–has been a wild card in recent years, and it’s playing Russian roulette with the caribou.” 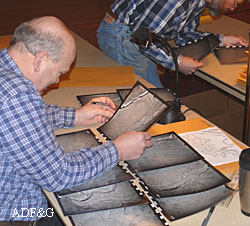 A 25-year study conducted by Federal Bureau of Land Management biologists has documented a decreasing amount of lichens in the herd’s winter range on the eastern Seward Peninsula and Nulato Hills. Dau is not sure if this is impacting the herd yet, noting, “Caribou health is the ultimate expression of range quality and, in recent years, caribou have gotten very fat during summer and maintained good body condition throughout winter when weather was not unusually severe.”

He added that in 2007 adult cow mortality was low and calf survival was high, which suggests the herd may still be capable of stability or even slow growth.

In the fall of 2007, ADF&G veterinarian Dr. Kimberlee Beckmen collected tissue and organ samples from the herd to test for disease and assess body condition. She gave the herd high marks for overall health. Dau said local subsistence hunters agree that caribou have seemed healthy and fat.

Despite the reduction in numbers, the herd is clearly still very large. By comparison, the Porcupine Herd is the state’s second largest herd and numbers 123,000. Nonetheless, Dau said this latest count signals the need for caution regarding large scale resource development in the herd’s range. “It’s certainly not lost on us that other large caribou herds in Alaska and Canada are now declining as well. Taken collectively, these declines may merely be a coincidence,” he said. “Alternatively, we may be entering a phase when conditions throughout North America are less favorable for caribou than during the past 30 years.”

The next Western Arctic Caribou Herd census is scheduled for 2010.

Sue Steinacher is an educator with the Alaska Department of Fish and Game and lives in Nome, Alaska.