Northern pike are a valued game fish in parts of the state where they naturally occur; elsewhere thy have become a noxious invasive species decimating native salmon and trout populations.

There is a lot of confusion about northern pike in Alaska. Are they a native or an invasive species? The answer is actually “yes” to both, but it depends on where you are.

The northern pike is native to most of Alaska, but it does not naturally occur south and east of the Alaska Mountain Range except for a remnant population near Yakutat. Pike are top-level predators in aquatic food chains and are highly piscivorous (fish eating). Outside their native range, trout, salmon and other fish have not had time to adapt defenses against pike’s predatory tactics. In Southcentral and Southeast, the northern pike is an invasive species. According to Tammy Davis, ADF&G’s invasive species project leader, “Invasive species are plants or animals that do not naturally occur in an area and can negatively affect the environment, the economy, and/or recreational activities.” In Southcentral Alaska, northern pike are doing just that. Pike were illegally introduced into water bodies of the area by people, and they are decimating salmon and trout populations. This can damage both the environment and the economy and can reduce recreational fishing opportunities.

Where northern pike naturally occur in Alaska, they are valuable subsistence and sport fish. Unfortunately, the desire for local pike fisheries is likely what prompted their illegal introductions to Southcentral. Northern pike were first introduced to Bulchitna Lake in the Yentna River drainage in the 1950s. Since then, they spread to open systems and dispersed on their own. Through a combination of this dispersal and many more illegal introductions, invasive pike are now found in over 130 water bodies in the Mat-Su Valley, Anchorage, and the Kenai Peninsula. To make matters more complicated, pike were illegally transported from the natural population in the Yakutat Forelands to a series of ponds within the town of Yakutat where they did not naturally occur. In Yakutat, pike are both native and invasive depending on the population you are talking about.

In Anchorage, pike were introduced to several urban lakes including Sand Lake and Cheney Lake. According to Matt Miller, regional management biologist for Anchorage, “Cheney Lake used to be one of the most popular rainbow trout fisheries in the city before pike were introduced.” The same can be said for many lakes on the Kenai Peninsula. Rob Massengill, an ADF&G research biologist in Soldotna reports that, “Pike are established in sixteen lakes, as well as Soldotna Creek on the Kenai Peninsula”. Massengill also notes that, although not established, pike are occasionally reported from the Moose and Kenai rivers.

Northern pike can have devastating effects in some of these water bodies. Generally, when pike are introduced to a shallow lake in Southcentral, they eventually consume all of the juvenile salmon and trout. When the salmon and trout are gone, they start cannibalizing each other. In time, the large pike are harvested by anglers or die, the remaining pike population consists of “hammer-handles” – small pike that won’t grow because there is no longer sufficient food to support substantial growth. Once the population is under “stress,” their biological response is to mature at this smaller size and increase their reproduction. The end result is a lake full of little pike. This pattern has been repeated in Southcentral lakes, many of which used to be stocked by ADF&G. When pike become established in a stocked lake, ADF&G often has to stop stocking it. It is too expensive to supply fish that will end up as pike food instead of providing angling opportunities as intended.

ADF&G has been working to restore lost fisheries by reducing pike populations where possible, and trying to prevent their spread. Sport fishing regulations have been liberalized for pike. Each spring and fall ADF&G removes pike from lakes in Southcentral with gillnets. This method has reduced their populations, but it isn’t going to eliminate all the pike. To eradicate them completely from certain lakes, the Department has to pursue more aggressive methods. There are only two proven methods to eradicate invasive fish from lakes. They are to completely drain a lake or use of a piscicide (fish-killing chemical) such as rotenone. Of these two options, rotenone is the most practical and efficient method. 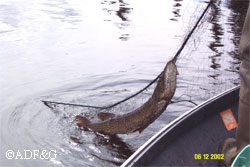 Rotenone is a naturally occurring chemical substance derived from the roots of tropical bean plants or legumes. It has been used by indigenous peoples throughout the tropics for centuries to gather fish for food. Today, it is a common ingredient in agricultural or garden pesticides, and it has been used by fishery managers in the United States since the 1930s to remove unwanted fish. When rotenone is dissolved in water, it basically works to kill fish by blocking the absorption of oxygen through the gills during cellular respiration. All organisms with gills can be affected including aquatic life stages of insects and zooplankton, but rotenone is not harmful to birds or mammals at the concentrations necessary to kill fish. Currently, ADF&G is developing plans to use rotenone in lakes in Anchorage, Soldotna, and in Yakutat to eradicate invasive pike populations.

ADF&G is planning to restore the rainbow trout fishery in Cheney Lake in Anchorage, but this can not happen until the pike are removed. Besides restoring the recreational fishing opportunities in Cheney Lake, removing the invasive pike will eliminate the threat that they could be moved into nearby Chester Creek. Chester Creek supports natural salmon runs and populations of resident fish. If pike were ever introduced into Chester Creek, those fisheries would be threatened.

Similar to the Cheney Lake project, ADF&G is also planning to eradicate pike from Arc Lake on the Kenai Peninsula. Arc Lake is located adjacent to the Sterling Highway two miles south of the Soldotna bridge. As in Cheney Lake, the illegally introduced pike have killed all the other fish in Arc Lake. Also, Arc Lake is located within a few miles of the Kenai River, and there is concern that pike in Arc Lake could easily find their way into the Kenai. Environmental assessments are currently being written for both the Cheney and Arc Lake restoration projects, and thorough public decision-making processes will be conducted for both. If all goes well, both lakes could be treated with rotenone this fall, and rainbow trout or salmon could be re-stocked into these lakes as early as next spring.

In addition to the proposed lake restoration efforts in Southcentral, the pond system in Yakutat with invasive pike will also be restored. This system of ponds is very close the Situk River which is world-renown for its steelhead runs. To prevent pike from moving into the Situk, it will be necessary to remove them from the Yakutat pond system, and, again, rotenone will likely be the best tool to accomplish this.

There are things you can do to help ADF&G tackle the pike problems. Always check the regulations, but anglers are generally encouraged to harvest all the pike they can catch and use in Southcentral. You can also help spread the word that invasive pike damage our fisheries. Lastly and most importantly, you can keep our fisheries healthy by not putting any live fish, pike or otherwise, into any water body and by not moving fish between water bodies. This activity is illegal in Alaska and is a class A misdemeanor. If you witness someone other than ADF&G stocking personnel putting fish in a lake or stream, or catch an unusual fish, for example something you have never caught in that place before, please report it right away to your local ADF&G office or call Fish and Wildlife Safeguard at 1-800-478-3377.

ADF&G completed a management plan for invasive northern pike that can be viewed online at http://www.adfg.alaska.gov/static/species/nonnative/invasive/pike/pdfs/invasive_pike_management_plan.pdf
ADF&G encourages public feedback and comments on this management plan. Plans for the management of pike in Cheney and Arc lakes will soon be available online at the site listed above. Please review these plans when they are available and let us know what you think.