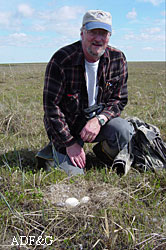 Waterfowl biologist Tom Rothe looks over a nest with eggs.

If the federal government is responsible for managing migratory birds, why does Fish and Game maintain a state waterfowl program?

Tom Rothe, Waterfowl Program Coordinator for the Alaska Department of Fish and Game, says he frequently gets asked that question. The reason, he said, can be explained by understanding a bit about the history of waterfowl management in the United States.

Around the turn of the century, birds were killed in great numbers for their feathers and meat. Concerns over vanishing bird populations led to the federal management of migratory birds with the passage of the Migratory Bird Treaty Act of 1918, Rothe said.

The act worked to conserve birds and to align management across states.

“The federal government realized it could not do everything and needed local expertise, and so gave states a say in the research and management of migratory birds,” Rothe explained.

But by the early 1950s, a system of flyway councils had evolved to allow states to assist the federal government in the management of migratory birds, while fulfilling their state wildlife management mandates.

Each council is made up of policy administrators from the states within the four north-south flyways. The result over the years has been a model of cooperative management between states and the federal government.

The Study Committee meets three times a year to review the health of migratory bird populations, write cooperative management plans and develop hunting regulations of migratory birds, among other tasks.

Rothe said Fish and Game sets work priorities based on the flyway council’s decisions. Over the years, he and his team of biologists have conducted long-term banding studies, flown aerial surveys to assess populations, worked with federal managers to legalize subsistence hunting of migratory birds, studied declining populations of geese and seaducks and even tested birds for avian influenza.

Rothe said that with a small staff, the state’s waterfowl program has focused on issues important to the state’s interests and niche work not being done by federal biologists (in the U.S. Fish and Wildlife Service and the U.S. Geological Survey).

In the early years of statehood, Fish and Game had one or two biologists dedicated to game bird work. Today, the waterfowl group is not much larger with a total of three biologists – Rothe plus Mike Petrula and Dan Rosenberg.

Rothe grew up in Wisconsin and first came to Alaska in 1976 to work for the U.S. Fish and Wildlife Service doing studies of waterfowl and wetlands on the North Slope. He earned an undergraduate degree in population dynamics from the University of Wisconsin in Green Bay and a master’s in wildlife ecology from Iowa State, where many waterfowl biologists are trained.

In 1983, he became Fish and Game’s waterfowl program coordinator and has stayed in that job ever since. Rothe and his wife, Ann, live in Eagle River with their three dogs and enjoy cooking, waterfowl hunting and training their hunting dogs.

Rothe said waterfowl management is unique because many of the biologists have typically worked together across state boundaries for many years.

“It’s a specialty and once people get into the field, they tend to stay in it,” Rothe said.

Rothe’s job is part biology and part diplomacy. In the 1980s, he helped launch Alaska’s duck stamp program, which has generated more than $4 million for conservation efforts to protect and enhance Alaska’s waterfowl and wetland habitats.

In more recent years, he worked alongside federal managers to establish legal, regulated subsistence hunting of migratory birds. That involved educating people in the Lower 48 about subsistence in Alaska, collaborating to amend treaties with Canada and Mexico, and developing a new co-management system to manage hunting. Rothe also has worked to educate hunters not to use lead shot and to encourage better shooting skills to reduce bird wounding. 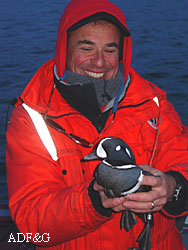 His main work, however, is coordinating with the Pacific Flyway and directing research and management projects.

Mike Petrula: Management biologist
With just three biologists in the program, most efforts are cooperative. But while Dan Rosenberg tends to focus primarily on research questions, Petrula is the designated management biologist.

Petrula was born and raised in Queens, N.Y. and decided to become a biologist after volunteering with Washington’s Department of Fish and Wildlife. He studied animal science at Tennessee Tech University and earned a master’s degree in wildlife biology from the University of Alaska Fairbanks in 1994. He started with Fish and Game in 1995 as a field technician and has been in his current job since 1998.

Petrula has been involved in long-standing duck banding projects at Minto and Susitna Flats, studies of the declining Dusky Canada geese population on the Copper River Delta and Middleton Island and in a collaborative project with California and Oregon to study Tule white-fronted geese. The Tule goose population is small - estimated at 10,000 - 15,000 birds - and in recent years has shifted nesting and molting areas. Through VHF and satellite telemetry studies Petrula and his colleagues have monitored the Tule population to assess their current distribution, generate population estimates and determine survival rates so wildlife managers can better protect their essential habitats.

Petrula assists with research projects and has also done work studying migration routes and winter and summer ranges of sandhill cranes. He lives in Anchorage where he continues to work on building his own home in Bear Valley. He also enjoys hunting, fishing, boating and dog training.

Dan Rosenberg grew up in New York State and studied at Boston University and Humboldt State University. He worked as a biologist in California, Utah, Colorado and Arizona before coming to Alaska in 1980 to study bowhead whales through the University of Alaska Fairbanks Sea Grant program. He then worked on waterfowl and wetland management for the U.S. Fish and Wildlife Service until 1983 when he came to Fish and Game to work in the habitat division. In 1985, he came to work for the waterfowl program.

He lives in Anchorage with his wife, Kristy, their five-year-old daughter, Rachel, and a golden retriever. When not remodeling houses, he enjoys spending time with his family and doing a variety of outdoor activities ranging from running and cross-country skiing to photography and bird watching.

Rosenberg worked largely on management issues throughout the state until the Exxon Valdez oil spill thrust him into research studying seaducks.

“Few people were studying seaducks then,” Rosenberg said. Although important to subsistence hunters, seaducks are not popular among most sport hunters and so had not been the focus of much research. Today, however, seaducks are studied more intensively because of their importance to subsistence hunters and because most species are declining, with some suffering serious enough population declines that they have become listed under the Endangered Species Act.

Rosenberg has played a key role in developing recovery plans for threatened Steller’s and spectacled eiders. Even though the listing process is a federal one, the state has an “important role in the listing and recovery process,” Rosenberg said.

Since 1994, Rosenberg has led research projects monitoring the recovery of harlequin ducks following the Exxon Valdez oil spill. His work compares changes in population structure and numbers over time between oiled areas and non-oiled areas.

Through his other research, the state has become a pioneer in using satellite telemetry to delineate populations and understand migration patterns and habitat use in several species of seaducks.

Elizabeth Manning is an outdoor writer and educator with the Alaska Department of Fish and Game in Anchorage.