About 40 sea lions lounged on the rocks at the Benjamin Island haulout north of Juneau, and one was injured. A thin, white plastic packing band circled his neck and cut deep into his skin.

Two biologists studied the animal from a skiff 40 yards off the rocks. Lauri Jemison and Jamie King of the Alaska Department of Fish and Game discussed possible ways to free the entangled animal. None seemed very promising.

Jemison and King are marine mammal researchers and they’re trying to help entangled sea lions and prevent further entanglements. In recent years about 400 entangled sea lions have been documented in Southeast Alaska, although biologists believe the actual number is higher. About half the animals have loops around their necks – mostly hard plastic packing bands or heavy rubber loops made from inner tube material. About half are caught in fishing gear. A few are tangled in netting or rope, and one has an old tire stuck around its neck.

Bait boxes are often secured by packing bands which are made of a hard plastic material, and if those are lost overboard, uncut, they can be a source of entangling material. “We have seen a number of sea lions with packing bands around their neck, with the band cutting into the skin and flesh,” Jemison said. “As the sea lion grows, the band cuts more deeply and eventually can kill the animal.”

Jemison said young sea lions are extremely curious and investigate objects in the water and on beaches, and wind up with the loops around their necks.

About half the entanglements involve fishing gear. Sea lions will pursue and eat a fish that’s been hooked by a sport or commercial fisherman, and wind up swallowing the hook. Jemison and her colleagues see animals with flashers attached to their mouths, hanging from line tied to a swallowed hook. Sometimes fishing lures and hooks are visible, and biologists believe more animals may be hooked but showing no outward sign. A necropsy of a dead sea lion found near Gustavus three years ago revealed a fishhook in its digestive tract. 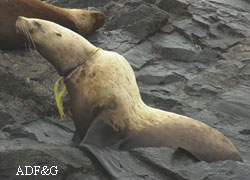 A sea lion with a loop of rope around its neck. Hundreds of sea lions in Alaska are tangled in trash and fishing gear.

“There’s no way to know how many may be entangled (in this way), as there may be no external sign of entanglement,” Jemison said. “They’re interested in fish, and the sea lions are basically entangling themselves - when folks are out salmon fishing the sea lions are coming after the fish on the line, going for the fish and eating it.”

Helping entangled or hooked animals is difficult. Jemison and King are looking to adapt the proven capture methods generally used for research. But these techniques focus on smaller, juvenile animals, and animals of all ages and both sexes are entangled in all different types of gear and debris. The techniques biologists use to capture animals such as moose and bears don’t translate well to sea lions. A sea lion could be darted with a tranquilizer or immobilizing drug, but the animal could fall or jump in the water and then drown. The same could happen if a net gun is used, although there is some potential for these devices that throw nets.

“Basically we need the perfect situation – the animal is up high on the rocks, by itself, so there’s no chance of catching two at once, and we need to be able to secure it so it doesn’t go in the water,” Jemison said

Jemison said there have been a few successes. One small sea lion was tangled in line, and King was able to grab the line and pull the animal up to the skiff and cut it free. Elsewhere, some small sea lions have been restrained and plastic loops cut off their necks. The bands were embedded in the skin and biologists pulled the plastic through and out.

A sea lion with a plastic packing band around its neck. Biologists recommend mariners cut any loop in rope or banding material to prevent injury to marine mammals.

Far more promising is the prospect of reducing entangling materials in the environment. Cutting any loop is a good start. “Any type of loops in rope, monofilament fishing line, nets – these are all potentially hazardous,” Jemison said. “There are some simple things we can do to avoid these types of entanglements: secure garbage when at sea or on the coast, clean up trash you find on the beach that could wash into the ocean, and cut any loops that you are discarding”

A number of organizations are working on the issue. The Marine Mammal Stranding Network, part of the National Marine Fisheries Service, is collecting data on entangled animals and sources of materials. The Marine Conservation Alliance Foundation has a Marine Debris program, and they’re very interested in cleaning beaches and determining where the debris is coming from, Jemison said. “We’re working with them to identify some of the hotspots – area that accumulate a lot of debris, areas that should be cleansed, and sources of material getting washed back in the ocean.”

Jemison and King are working with a Prescott grant from the National Oceanic and Atmospheric Administration to develop methods to disentangle sea lions and to create a short video of entangled sea lions with information on how people can reduce entangling materials in the marine environment. They also plan to clean up beaches and monitor them.

“This summer we’ll identify certain beaches near some of the larger haul outs and rookeries where we can monitor marine debris,” Jemison said. “We’ll clean debris off these beaches this summer, then we’ll be able to go back each year as we’re doing our annual Southeast-wide sea lion surveys and clean then off again and hopefully get an annual accumulation rate. Cleaning beaches is a great way folks can have a positive impact and reduce entangling materials out there.”

Riley Woodford produces the Sounds Wild radio program and is the editor of Alaska Fish and Wildlife News.