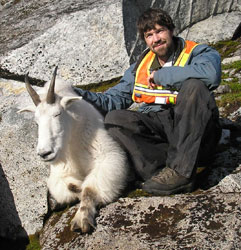 In a bizarre twist, a black bear north of Juneau has managed to equip itself with a GPS tracking collar that biologists originally put on a mountain goat.

“I’ve never heard of anything like this happening,” said Kevin White, a wildlife biologist with the Alaska Department of Fish and Game.

White is researching mountain goats in Southeast Alaska between Berners Bay and Skagway.

Using helicopters to access the steep terrain above Lynn Canal, he’s equipped about 90 goats with GPS tracking collars, which record the animals’ movements over seasons. Each collar has a specific frequency and White is able to periodically fly over the animals and download data without recapturing the goats.

The black bear-mountain goat collar-swap story begins in October, 2006. White and two colleagues captured an older female mountain goat northeast of the Meade Glacier, a tributary of the Juneau Icefield. A month later, following heavy snowfall, the goat moved downslope into forested terrain, and died during the winter. The collar transmitted a mortality signal, but deep snow prevented White from retrieving the collar.

Last August, White and colleague Jeff Jemison searched the area where they believed the goat had died, but they were unable to find the collar or the carcass in the heavy brush. This implied that the collar had either malfunctioned or moved beyond the detection range of the radio receiver (three to five miles). Six weeks later White was again in the same general area, and suddenly picked up a signal from the collar. Neither he nor the aircraft pilot, Lynn Bennett, could see anything in the thick alders below. This happened again couple weeks later. White was completely perplexed. 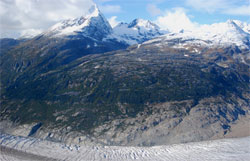 The Meade Glacier, in the area where the bear acquired the collar.

Finally, on Oct. 4, he tracked in on the signal on an alpine plateau and saw a black bear wearing a brightly colored collar. He knew there were no Alaska biologists collaring black bears in the area. He figured there were two options – a Canadian researcher collared a bear in the Yukon or British Columbia, and it wandered over to the coast, or the bear had scavenged the carcass of the goat and somehow managed to put on the collar and wear it.

“When I was considering different scenarios to explain the situation, it seemed inconceivable that this bear could be wearing the missing mountain goat collar,” White said. “For one thing it was a nanny collar; it was small, not much bigger than a collar for a large black-tailed deer.”

A week later he was able to positively identify the signal – it was definitely the dead goat’s collar. Each GPS collar has a unique computer IP address, and data retrieved from the bear could only be successfully downloaded from the collar previously worn by the mountain goat. Later, after careful examination of the data, White determined that bear “put on” the collar around July 5, and he’s been able to track the bear’s movements last summer.

White said his colleague, bear researcher LaVern Beier, never had any doubt about what was going on. “Kevin was really focused at first on another researcher, but the odds were just too great that someone else would be using that same frequency in the same area,” Beier said. “This was the only logical explanation. But it had to be the right bear with the right size head, and it stayed on.”

Beier said that every year or so, Alaskans see pictures in the newspapers of a moose in Anchorage tangled in a swing set, wrapped in a string of Christmas tree lights, or wearing an old tire or something. “Bears are way more mischievous and opportunistic, and they are really curious about foreign objects in their environment,” he said. 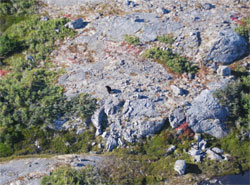 An aerial view of the black bear with the goat collar.

Beier has watched bears scavenging and said they really root around and get into things, and he can picture a bear slipping its head through the collar. “He didn’t really put on the collar - it’s not like he was trying on clothing,” he said.

White downloaded the information from the collar, and was amazed at the bear’s activity. The bear has crossed the Meade Glacier four times, spent time on an isolated nunatak on the ice field – an “island” of rock surrounded by ice, and later returned to the mountains above the Katzehin River. The signal currently indicates the bear is inactive – probably hibernating.

As of early April, the bear was still hibernating, and White plans another tracking trip in early May. He plans to eventually retrieve the collar.

“The collar has a self-release mechanism, it’s scheduled to fall off next fall,” White said.

Where the bear decides to go in the meantime is anybody’s guess. Nonetheless, one thing is for certain: studying black bears by collaring mountain goats is unlikely to occur again anytime in the near future.

More on radio collars and what to do if you find a collar see: http://www.adfg.alaska.gov/index.cfm?adfg=livewith.collarsbandstags
Riley Woodford is a writer with the Alaska Department of Fish and Game. He’s the editor of Alaska Fish and Wildlife News (wildlifenews.alaska.gov) and produces the “Sounds Wild” radio science program.