Dinosaurs of the Deep
Lake Trout are Freshwater Leviathans 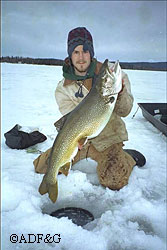 With all of the excellent fishing to be had in Alaska, it seems odd that the largest freshwater fish is often one of the least fished for. A fish that can be caught any time of year, on everything from whole whitefish to wooly worms, and that serves up well around the campfire as well as it does on a candlelit dinner table… what more can you ask for?

Maybe the reason for this apparent neglect is because it is one thing to fish for these dinosaurs and another to actually catch them. The lake trout (Salvelinus namaycush) which is actually not a trout at all but a char, is a close relative to the much more popular and coastally-ubiquitous Dolly Varden (Salvelinus alpinus). Lakers typically live in large, deep oligotrophic (have high dissolved oxygen levels, but not very organically productive.) lakes in low densities; and most lakes in Alaska that contain lake trout are well off the road system. Generally, their range in Alaska is comprised of lakes in the foothills of the Alaska and Brooks Ranges, in several large lakes in the Bristol Bay region and on the Alaska Peninsula.

Unfortunately, the life history of lake trout is such that they can be easily over-exploited when not properly managed. Lake trout have slow growth rates; they often only spawn every other year or more which contributes to their low fecundity (reproductive success). They have strict habitat requirements as well as extreme susceptibility to changes in habitat Because lake trout typically inhabit deep water and occur in low densities, estimating the abundance or size composition of a particular population of these elusive char is often difficult and costly, especially in large or remote lakes.

While the lake trout doesn’t do many things very well, they can be really good at getting big. Lakers can grow to over 60 pounds in parts of Canada; although in Alaska anything over 20 pounds is considered big (the state sport-caught record is 47 pounds, taken from Clarence Lake near Glenallen in 1970). The largest laker ever recorded was a 102 pound fish captured in a commercial gill net in Lake Athabasca, Saskatchewan, in 1961.

Lake trout are also one of the longest-lived freshwater species. In general, the larger the lake, the larger the lake trout can grow. They can easily reach 20 years of age in Interior Alaska lakes, and individuals in large lakes on the North Slope live in excess of 50 years. Several small lakes off of the Denali Highway contain lake trout that become sexually mature at about 12 inches in length, but do not get much bigger than 18 inches for the rest of their lives. Larger lakes in the Alaska and Brooks Range foothills have lake trout that do not become mature until they are pushing two feet long; spawn only every couple of years, and get up to 30 pounds or more. The connection between lake size and fish size usually has to do with the size of the food in the lake. It’s a lot easier to get big on five-pound humpback whitefish than it is on five-ounce slimy sculpin. Populations in many smaller lake trout lakes are almost exclusively invertebrate eaters (snails, zooplankton, chironomids, etc), and don’t get very big at all. 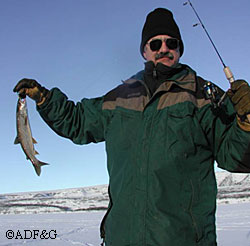 Mike Doxey with a laker from Sevenmile Lake off the Denali Highway.

Some anglers call muskellunge the “fish of a thousand casts.” Ice fishers might call the lake trout the “fish of a thousand jigs.” The last time I went ice fishing for big lake trout I caught a 23-pounder in the first half hour (as did my fishing companion), but we didn’t get another strike for the next five hours. While I may not be a champion laker-taker, my companion was, and he said our results were typical. In smaller lakes where densities are high the action may be a little busier, but generally if you plan to go ice fishing for lakers, you might want to bring a football or something to read….

As for tackle, a big fluttering spoon (such as a Krocodile, Hot Rod, Syclops, etc.) with a large single hook and a strip of whitefish or herring will work just about anywhere. If fishing is really slow where you are, try prospecting around the lake at different depths (when ice fishing, remember you may use two closely attended lines, unless the regulations for the waters in which you are fishing indicate otherwise). Generally, you should start jigging off of the bottom a few feet, but also try varying your depths. If you are fishing in a lake where burbot or northern pike can be found as well as lakers, then you have a chance to be kept a little busy catching these fish also, since they will hit the same lures. If you are fortunate enough to get a strike from a big lake trout, set the hook and hang on. They can pull like a freight train and put up a fight that is well worth the wait.

Brendan Scanlon is the Division of Sport Fish Northwestern/North Slope Area biologist, based in Fairbanks