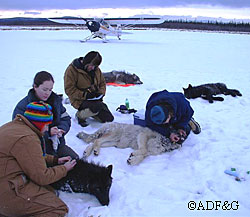 Wolves in one of the Blair Lakes packs are immobilized, examined and treated for lice. ADF&G veterinarian Kimberlee Beckmen, biologist Craig Gardner and college intern Kimberly Dullen are assisted by the pilot.

Wolves in Interior Alaska are getting help from state wildlife biologists.

A lice infestation is plaguing a number of Alaska wolf packs, and the Alaska Department of Fish and Game is treating some packs with Ivermectin, a parasite-killing drug. Biologists and the department veterinarian are monitoring the spread of the parasites, and working with others to determine if the tiny parasites have long been present at low, undetected levels in wild wolves, or if the lice were introduced from domestic dogs.

Lice are barely visible. They cling to hairs next to the skin, and feed on skin particles and fluids on animals’ skin, and are spread by contact between animals. State Veterinarian Kimberlee Beckmen said lice affect the health of the animals. Although some wolves can carry a few lice with no ill effect, others are devastated by the itching and irritation from high numbers of the parasites.

“The lice don’t really hurt them, but they’re itchy and they really scratch themselves, like a flea-bitten dog in the Southern United States,” said Beckmen. “We saw one alpha female in a pack that appeared normal, but we confirmed she did carry lice. Her pups looked terrible.”

Blood tests on infected animals show they are in poor health. Itchy wolves scratch, lick and chew at their skin, creating sore, bald patches. In some cases they lose so much hair they have trouble keeping warm in winter. The pelt may be ruined as far as commercial value. The scratching and irritation is stressful, and results in secondary infections as well.

Dog lice do infect wolves in some parts of the state. The dog louse was first identified in wolves on the Kenai Peninsula in 1981. Efforts to eradicate lice on the Kenai have been unsuccessful for the most part, and lice have spread to most of the wolf packs on the Kenai.

In 1998, wolves and coyotes in the Palmer area were found to have lice. By 2004, the parasite had spread northeast into the Glennallen area and the Delta Junction area south of Fairbanks.

Wildlife biologist Craig Gardner is working with about two dozen wolf packs in the area just south of Fairbanks, Game Management Unit 20A. “We have about half the packs collared so we’ve been able to track them,” he said. “As lice come into these packs we’ve been able to treat them, and then monitor how successful we are.” 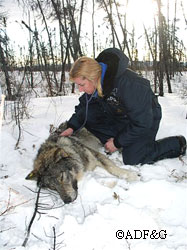 During the winter of 2005-2006, examination of wolves in collared packs and examination of hides brought in by trappers indicated that seven out of 12 packs south of Fairbanks were infected. That summer, five wolf packs were treated.

Knowing where the wolves den is important. Gardner flies over the dens in the spring and drops Ivermectin-laced meat near the dens. “That’s my favorite part,” he said. “It’s like delivering manna from heaven.”

“Maybe two of the 12 monitored packs now have lice, Gardner said. “The rest look clean as far as we can tell from looking at hides. It’s not as common in the areas as it was three years ago.”

Ivermectin is used widely to kill parasites infecting pets, cattle and other animals. It disrupts the nervous system in a number of different internal and external parasites, including fleas and heartworm, but can’t cross the blood-brain barrier in mammals. It was developed in the mid to late 1980s and wasn’t commercially available (and the canine dosages were not yet determined) when the lice infestation was first documented in the Kenai wolves. The drug works for 14 days, and once the lice are killed the wolves remain lice free unless they are re-infected through contact with other wolves – or other lice-infested furbearers such as dogs or coyotes. 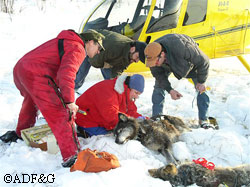 Gardner and Beckmen are working with scientists at the University of Alaska Fairbanks to learn more about the parasites. Graduate student Theresa Woldstad and biology professor Kris Hundtermark are looking at the lice, and using genetics to determine if they are dog lice or some kind of wolf lice.

“Did this spread from dogs to wolves and then wolf to wolf,” said Beckmen. “Is this a wolf louse or a dog louse? Did it spread from the Kenai, or was it up here before and now is spreading? It might have been undetected, when animals have low levels of infection, it doesn’t show. It seems some adults develop a kind of immunity, and they are not scratching, licking and chewing at their skin. But it can spread to pups, and the pups look really bad.”

Wolstad has been looking at wolf pelts from across the state, and looking at lice from dogs and wolves. Beckmen said it’s possible lice have been present but unrecognized in the past. Biologists used to think lice couldn’t survive north of the Alaska Range because of the winter cold. But during the course of the project, Beckmen was surprised to discover living lice on a dead, half-frozen wolf.

“We found that lice survive at much colder temperatures than the literature said. They’re Arctic-adapted parasites,” she said. “We were very careful to avoid spreading lice. We bagged our clothes, put insecticide on them, and left them outside to freeze. We did not want to spread lice to our own dogs.”

Gardner and his colleagues will treat more wolves this spring, and will continue to monitor the packs. “This fall we’ll capture and look at wolves, and we’ll try to find those elusive packs,” he said. “Next year we’ll do more maintenance, and monitor any transfer and see how lice have gone through the populations. Some of those we treated three years ago are still clean.”

Gardner said although the program is labor intensive, it has a lot of support.

“No one wants to see wolves with lice,” he said.

Riley Woodford is the editor of Alaska Fish and Wildlife News and producer of the “Sounds Wild” radio program.