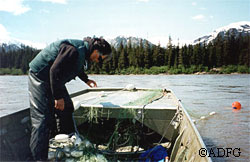 It’s May 29, 2007, on the lower Stikine River in Southeast Alaska, and the river is rising, FAST, 10 feet in the last 10 days according to the USGS Stikine River water gauge. Clouds of silt blow downriver, driven by a gusty 20 knot wind. The crews running the drift gillnets know it will be a slow, punishing day, but at least it’s not raining, yet…

The first four drifts of the day produce no fish, not even a bump, and the wind and silt continue to pound the crew. About 17 minutes into the fifth drift, the corks start to bob violently about mid net. “FISH!” shouts Fisheries Technician Seth White, and the two-man crew jumps into action. The net is immediately hauled from the river and a large, bright king salmon is gently removed from the web, just seconds after initial contact. The fish is gently placed into a large tote filled with fresh river water. A blue spaghetti tag with U.S./Canada and other identification is applied for easy recognition if this fish is recaptured at a later date. The length and sex of the fish is recorded and scales are collected to determine age. The whole process takes about three minutes and the fish is released to continue its journey. The crews ended up tagging four kings…a pretty slow day, but not bad considering the rising water.

Since 1995, the Alaska Department of Fish and Game (ADFG) Sport Fish Division, in cooperation with the Canadian Department of Fisheries and Oceans (DFO) and the Tahltan First Nation (TFN), have been tagging wild kings to learn how many enter and spawn in the river. Tagging takes place, rain or shine, every day from about May 10 through July 10. During July and August, kings are captured at or near their spawning grounds on the Stikine River and examined for the presence or absence of these tags. Fish are inspected at known spawning locations such as Little Tahltan River, Verrett River, and Andrew Creek. Those harvested by the inriver Canadian commercial, aboriginal, and sport fisheries are also examined for tags. The percentage of tagged fish seen in these upriver samples is used to estimate how many king salmon entered the river. Inseason and preseason population estimates are also produced using the data collected from this project. The results provide fishery managers with tools to intensively manage the Stikine River run. 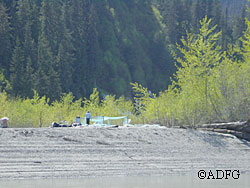 Mending the net on the Stikine River.

As part of a coast-wide rebuilding project for king salmon, ADFG and DFO began a management program in the early 1980s to rebuild king salmon stocks in Southeast Alaska. All gear groups were restricted by times and areas fished, in particular by limiting catches near river mouths in the spring. The Stikine River king salmon population has rebounded well by attaining escapement goals developed by the U.S. and Canada in conjunction with the Pacific Salmon Treaty.

“When we started this project in 1995 no one knew if we could catch enough fish in the lower river to meet our objectives,” said Keith Pahlke, a Fish and Game chinook salmon research biologist. “The gillnet crew persevered and learned how to catch fish despite the snags, bugs, wind, rain, and cold.”

Pahlke said this project has matured from a feasibility study, to a research project, to an ongoing management tool. The project provides fishery managers with the ability to harvest Stikine River Chinook based on inriver abundance. “It is extremely satisfying to see the success of this project and know that the hard work of all the field crews and project leaders has paid off,” Pahlke said.

In response to the success of the rebuilding program, the U.S. and Canada reached a harvest sharing agreement in February 2005. As a result, directed commercial king salmon fisheries opened up in District 8 (near the mouth of the Stikine River, U.S. fishery) and within the Stikine River above the U.S/Canada border (Canada fishery) for the first time in over 25 years! These directed fisheries have and will continue to operate annually, whenever there is a harvestable surplus.

“The reopening of the king salmon gillnet fishery in District 8 has provided a nice boost to the fishing communities of Wrangell and Petersburg during May and the first half of June,” said Petersburg Area Management Biologist William Bergmann. “The annual ex-vessel value of the harvest has been between ½ million and 1.2 million dollars since 2005. The numbers of salmon harvested has not been very large but the demand and price for fresh, top quality wild king salmon has been quite strong. We are looking forward to the fourth year of the fishery starting on May 5, 2008.” 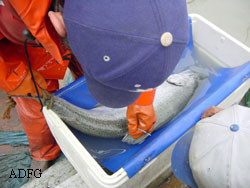 The U.S. sport fishery is also liberalized in District 8 during years of harvestable surplus.

Doug Fleming, the Petersburg-Wrangell area biologist for the Fish and Game Sport Fish Division, said overall, sport Stikine king salmon harvests in District 8 waters have remained close to historic averages since directed fisheries reopened in 2005. “We are allowing anglers the opportunity to fish two rods, and have increased daily bag and annual limits from May 1st to July 15th,” Fleming said. “Sport salmon anglers in Wrangell appear to be doing very well, resulting from the reopening of previously closed waters, liberalized regulations, and several commercially closed areas that benefit sport anglers. We are looking forward to this spring’s run, and would like to see stronger sport catches of Stikine-bound king salmon for all local anglers in Petersburg and Wrangell.”

Not only do the fish and fisheries benefit from this successful program – the project has been rewarding for the biologists as well. In August 2007, ADF&G sport fish biologists John Derhovanisian, Keith Pahlke, and Philip Richards received the 2006 Sport Fish Restoration Outstanding Project award from the American Fisheries Society under the category, Research and Surveys. Just three national outstanding project awards are given each year by the American Fisheries Society. Tom Rockne (ADF&G) and Alex Joseph (TFN) were crew leaders during the development of this project and were crucial to its success.

Philip Richards is a Chinook salmon research biologist with ADFG Sport Fish Division located in Douglas. Additional information about this project can be found at.
http://www.sf.adfg.state.ak.us/Region1/salmon/stikine.cfm