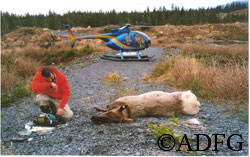 Capturing and tagging elk for research.

Q) On the Kodiak Archipelago there are several healthy elk herds. Could you tell my 5th and 6th grade class at Kodiak Christian School if there are any "verified" reports of elk on Kodiak Island proper?

A) Prior to the early 1900s there were only six land mammals on the islands of the Kodiak archipelago (tundra vole, short-tailed weasel, little brown bat, river otter, red fox, and brown bear). People wanted to have animals that could be hunted for meat so they introduced Sitka black-tailed deer (around 1900) and Roosevelt elk. The eight elk introduced to the archipelago came as yearlings from the Ho Valley on the Olympic Peninsula of Washington State in 1928. For the first year they were raised at an Experimental Agricultural Research Station near Kalsin Bay, south of Kodiak city. Originally, the plan was to release them on Kodiak Island, but concerns that they may compete with cattle for winter foods prompted officials to put them on the large island immediately north of Kodiak – Afognak Island – in 1929. 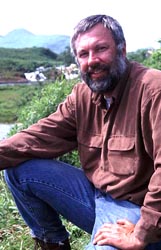 The residents of Afognak village took it upon themselves to protect the elk over the years, even though as the elk herd grew they would occasionally eat gardens and walk through clothes lines. Eventually the herd expanded to cover all of Afognak and nearby Raspberry Islands, and grew to over 1,400 animals. Although some elk periodically would swim to Kodiak, no herd ever became established on the island.

Today the elk herd is healthy and productive with about 900 animals in seven herds on Afognak and one herd on Raspberry Island. Elk habitat has been changed by commercial logging on Afognak, but through cooperation between ADF&G and local Native Corporations the elk have continued to thrive. Hunters harvest about 90 elk each year under a closely regulated permit system. Even though hunting seasons allow elk to be taken on all islands in the archipelago, there have only been four elk that have ever been killed on Kodiak Island proper. So yes, some elk have found their way to Kodiak Island, but no elk herds reside there.