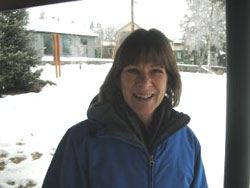 Kim Fisher. Depending on the season, she can be collecting moose and elk jaws from hunters, interpreting shrimping regulations for commercial fishermen, issuing logbooks to charter boat captains and providing sport fishing information to tourists.

Some Alaska Department of Fish and Game offices are staffed by biologists, technicians, researchers, outreach and support personnel. They understand wildlife management, fish biology and the regulations that govern hunting, sport and commercial fishing.

In the two-person office in Wrangell, Alaska, a coastal Southeast community of just 2,000 people, Kim Fisher may wear a dozen hats in one day.

Fisher is the lynchpin of the Wrangell office. Depending on the season, she can be inspecting bear hides for hunters, interpreting pot shrimping regulations for commercial fishermen, issuing logbooks to charter boat captains and providing sport fishing information to tourists. She is a front-desk person, a fishery technician, a wildlife technician, and an office manager all combined.

“The variety is really nice,” she said. “There are different things happening every day.”

Fisher is not entirely alone in the Wrangell office. Biologist Scott Forbes shares the office and focuses on commercial fishing issues, and in summer, field crews come in to work up the nearby Stikine River. Fisher helps Forbes with his duties, and runs logistics and support for the seasonal crews. She actually works for three divisions - sport fish, commercial fish and wildlife conservation.

Working with local hunters is an important part of the job. “You really get a sense for the community, and the way the community hunts – it’s a small town,” she said.

To better manage wildlife, regulations require that hunters and trappers bring hides and heads of certain species into an area office. A technician looks over the animal, makes notes and gathers information about the harvest. Hunters are required to bring in the jaw bone of elk and moose, and Fisher collects those in Wrangell. Although Dall sheep are not found in Southeast Alaska, Fisher has inspected the horns and heads of sheep taken by Wrangell hunters in other parts of Alaska. A seal is attached to bear hides, and Fisher is charged with sealing bears and furbearers.

“Now and then I get to see grizzly bears, at least a pelt and hide,” she said. “I’ve seen mink and marten. I saw a wolverine once. It would be really fun to see one alive in the woods, but they are so rare to see in the wild. I once had a cougar come through the office – and I thought the wolverine was impressive. Thinking of this big cat out in the woods…it was really impressive.”

As the department’s most visible representative in the community, she sometimes takes heat when folks disagree with hunting or fishing regulations or policies. Diplomacy and a thick skin are important.

“It can be difficult in a small town,” she said. “There can be confrontations on various subjects and issues with the department, and it can be tough when you’re familiar with so many people in community.”

How does she keep up with all of the regulations? “Practice,” she said, “just doing it. I’d hate to give someone wrong information, so I do research and exhaust my resources before giving an answer.”

Fisher moved to Southeast Alaska from Southeast Idaho, and spent her first decade in Alaska working on boats. Wrangell was just her port for supplies in those days, but has been her home since the late 1980s.

“I feel fortunate that I spent years in commercial fisheries before this job,” she said. “I was a deckhand on a tender, a shrimp pot boat and gillnetters, and my husband and I had salmon gillnet permit.”