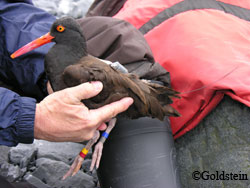 Researchers have equipped 20 black oystercatchers with small, backpack VHF radios, and another 14 with surgically implanted transmitters that broadcast the bird’s movements as they migrate.

Where do black oystercatchers go in the winter? How do they get there? Why do some migrate - or migrate farther - than others? These are a few of the questions biologists hope to answer by tracking oystercatchers this winter.

“This is the first time this has been done on this species,” said Forest Service biologist Mike Goldstein of Juneau, referring to the implanted transmitters. The finger-size cylinders were implanted by veterinarians, assisted by biologists and volunteers. The data are transmitted via satellite and then e-mailed to researchers, who are making it available to the public via the internet.

The route of the birds equipped with transmitters can be traced with Google Earth by going to the following website:
http://fresc.usgs.gov/products/blackoystercatcher/ptt_results.html
Seven oystercatchers were tagged near Juneau in August. In early September these birds moved 10 to 20 km north of their nesting territories near Portland Island.

“We’re finding that there are some staging areas,” Goldstein said. “The birds come out of nesting areas, congregate, then stage and maybe migrate together. We found something like 50 birds staging at Portland Island.”

A researcher focuses a remote camera near an oystercatcher nest in Prince William Sound.

“We think certain populations don’t migrate, but the majority do migrate,” Goldstein said.

Over the past two months, seven oystercatchers radio-tagged in Prince William Sound and on Middleton Island were tracked as they moved south almost a thousand miles to the coast of British Columbia near Prince Rupert and Vancouver Island.

Tiny radios were harnessed to 10 birds in Kodiak and 10 birds in British Columbia to track their movements. “The battery lasts until next spring, maybe until they get back on the nest territory, that’s but not as important as learning where they go in winter,” Goldstein said.

Researchers have a pretty good idea exactly where those birds will be in the spring, whether the radios are working or not.

“These birds show incredible nest site fidelity,” Goldstein said. “The birds will return to the exact same nest, or a neighboring area. If overwinter survival is goods, we’ll see them back on the nest next year.”

The birds are all leg-banded with an identifying combination of colors. In addition to banding the radio-equipped birds, 400 adults and 400 juveniles were banded in the Juneau area, in Prince William Sound, and on Kodiak and Middleton Islands. A few were also banded in Glacier Bay and down in British Columbia. Resighting those banded birds will provide additional information.