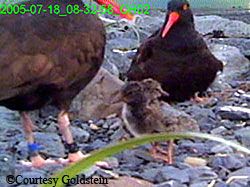 A pair of oystercatchers with two chicks on a beach in Prince William Sound, captured by a remote camera.

On a night-time beach, a wolverine discovers a black oystercatcher’s nest, a simple bowl scraped into the gravel. Glowing with a ghostly luminescence, the wolverine deftly breaks open and eats all three eggs, leaving the empty shells.

The scene was captured by a remote camera with an infra-red illuminator. Biologists are using waterproof, solar powered cameras and digital video recorders to study black oystercatchers in Harriman Fjord in Prince William Sound.

“We monitored 24 nests over two years,” said Mike Goldstein of the U.S. Forest Service, one of the partners in the project. “We chose Harriman Fjord because it has one of the highest densities of black oystercatchers ever found.”

The black oystercatcher is a crow-sized shorebird with a long orange-red bill. It favors rocky beaches and can be found along the coast of North America from the Aleutian Islands to Baja, California. The global population is estimated between 8,900–11,000 individuals, and two-thirds of that population lives in Alaska.

The black oystercatcher is a species of high conservation concern - although it is locally fairly abundant, globally the population is small. State and federal biologists in the U.S. and Canada, including the Alaska Department of Fish and Game, Parks Canada, the Forest Service, U.S. Geologic Survey and the U.S. Fish and Wildlife Service, are working together to learn more about these shorebirds. 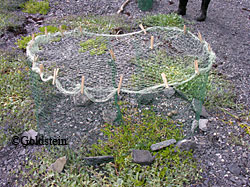 A special net is spread on the beach to trap oystercatchers. The captured birds are banded and released, and some are also equipped with tracking transmitters. Mike Goldstein photo.

Goldstein said there were four recording set-ups and each included two cameras. A close-up camera was placed one meter from the nest, and a wide angle camera was set five meters away. The digital video recorder and solar panels were stashed out of sight, connected by a long cable.

This winter, researchers are reviewing thousands of hours of footage to learn about nesting hazards and reproductive success. They’re skimming through at high speed and documenting and excerpting key moments. They’re seeing diligent parents hunker down on the speckled eggs as they traded places incubating, and seeing bear, mink and exceptionally high tides threaten the eggs of these ground-nesting birds. A number of clips can be viewed online, see the web address at the end of the article.

One clip shows a Sitka black-tailed deer walking over the nest.

“You’ll notice the adults did nothing to deter the deer,” Goldstein said. “We have other footage of a marmot on the beach and the parents and other non-nesting oystercatchers nearby redirected the animal. They actually rolled it a few times to discourage it from continuing its walk down the beach.”

Goldstein has been studying oystercatchers for five years now, and said the remote surveillance is one of a suite of projects to learn more about these shorebirds. The impetus began in the late 1980s. The Exxon Valdez oil spill hurt the birds in Prince William Sound and alerted biologists to the need for more information about the species. 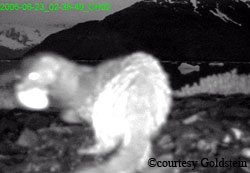 A mink with an oystercatcher egg in its mouth is photographed at night by a remote, infra-red camera.

“Oystercatchers could be negatively influenced by recreation tourism on beaches where they are nesting, by kayakers and industrial tourism,” Goldstein said. Although they are long-lived birds their nesting success varies tremendously from year to year.

A pair usually lays a clutch of three eggs, and if the first clutch fails they will likely try again, this time laying two eggs. Parents take turns sitting on the eggs. They spend about three weeks incubating, and the chicks leave the nest about three days after they hatch. The parents still watch out for them, moving them around the beach to find shelter and food. They’re considered fully fledged at three weeks, and fully functional at about six weeks.

To see oystercatchers and nest predators in action, go to: http://www.fs.fed.us/r10/chugach/pages_district/glacier/GRDWildlifeWeb/Kiosk_Bloy_home.htm

Riley Woodford is a writer with the Alaska Department of Fish and Game. He produces the “Sounds Wild” radio program and edits “Alaska Fish and Wildlife News.”