Wildlife Education is More than Teaching 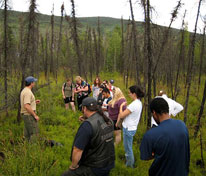 Teaching bear safety, recruiting citizen scientists, and helping teachers understand wildland fires and wildlife management – these are some of the tasks taken on by educators with the Division of Wildlife Conservation.

These are not the only educators with the Alaska Department of Fish and Game. Others focus on aquatic education or hunter education. But this month we’ll meet five education and outreach specialists with wildlife conservation, based in Anchorage, Juneau, Fairbanks and Nome. Although their work often has statewide relevance, they focus on recognizing and serving the needs of their regions.

“People think educators and they think we’re in the school classroom teaching kids,” said Mike Taras. “But much of our work is with teachers, training them to teach about wildlife, nature and wildlife issues.”

The wildlife educators are all writers, and have contributed articles to Alaska Magazine, Alaska Fish and Wildlife News, a variety of Fish and Game publications, and newspapers across Alaska.

MIKE TARAS is based in Fairbanks, and much of his work addresses issues in the Interior. He’s developed teaching materials and created booklets, brochures, posters, and lesson plans to educate folks about bear safety, fire ecology, moose biology and management, bison restoration and other topics. He worked to help Russian-speaking immigrants in the Interior better understand hunting regulations. He’s also developed partnerships with schools, conservation groups and government agencies.

Before coming to Fish and Game, Taras worked as a botanist, carpenter, teacher, and biological technician; he also served in the Army and was a lighthouse keeper’s assistant in Aransas, Texas.

Since taking this job a lot of his personal interests overlap with his work – such as learning everything he can about plants and wildlife. He’s a year-around outdoorsman and naturalist.

“I like to do lot of outdoor activities - canoeing, backpacking, skiing, hunting, catching fish, and taking photos of plants and animals. I especially like to pair it up with food gathering if possible; mushrooms, small game and large game. I also like to play hockey and workout. And of course, reading, that takes up a chunk of my time.”

ELIZABETH MANNING is based in Anchorage and is a frequent contributor to Alaska Fish and Wildlife News. She’s worked as an archeologist for the state of Hawaii, teacher and journalist.

Manning studied anthropology and rhetoric (similar to English) at U.C. Berkeley and earned a master’s degree in journalism from the University of Texas at Austin. She wrote for the news magazine High Country News in Colorado, and weekly newspaper in Portland, Ore., before she came to Alaska in 1998 to cover city government and statewide environmental issues for the Anchorage Daily News. She also worked as an outdoors reporter for the paper. She is married to John Pearce, a wildlife biologist who works for the U.S. Geological Survey. They have two
young sons. In 2002, they relocated to Fairbanks so John could pursue a Ph.D. in biology at UAF. 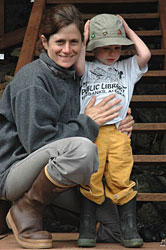 Elizabeth Manning with her son Eliot.

During the family’s year-long stay in Fairbanks, Manning studied education. When they returned to Anchorage she learned about the position at Fish and Game. “It seemed to me the perfect position combining my skills and background as a reporter with my newer interest and passion for education.”

Manning is developing materials for teachers, encouraging them to use Potter Marsh as a classroom for teaching about wetlands. She¹s delivered bear talks in Anchorage schools addressing bear safety and natural history. To expand that outreach, she¹s also trained volunteers to teach kids about bears. She started an outreach program with volunteers at Bird Creek to educate anglers about proper fishing behavior in bear country. She¹s also assisted with efforts to improve the infrastructure and increase stewardship of public lands at Potter Marsh and Palmer Hay Flats.

"We're building a strong volunteer program to assist with wildlife education in the Southcentral region," Manning said. "It's been very rewarding to work with committed volunteers who generously give their time and care deeply about Alaska's wildlife resources."