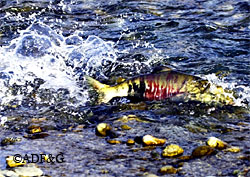 As parents we are accustomed to hearing the phrase from our young children on extended road trips. For chum salmon migrating more than 1,000 miles from the ocean to the Delta River, by the time they arrive, it’s winter.

Chum salmon travel 690 miles up the Yukon River and take a right on the Tanana River, the largest tributary to the Yukon, then up the Tanana another 340 miles to the Delta River, an incredible journey of 1,030 miles. This freshwater trip takes about 45 days to complete. Chum salmon start upriver in summer and arrive to spawn in winter.

The Delta River joins with the Tanana River within a few hundred yards downstream of the Richardson Highway Bridge at MP 275.5 in Big Delta. Standing out on the almost mile-wide Delta River on a sunny day in mid-November, at -10oF, with a brisk wind at 15 mph, is a breathtaking experience. There are cakes of ice jammed together sailing past on the nearby Tanana River, even though the Delta River itself is relatively free of ice. Snow and silt is pulled into the air and sent along the river like a curtain. Despite the wind blurring my vision there is much life here to see.

Spawning chum salmon are easily spotted in the many shallow braided channels of the Delta River. In some of the smaller side channels the water is slower and ice forms on the surface. In some of these smaller side channels, chum salmon keep the water stirred up and ice-free, but there’s not much room to spare. Periodically splashing can be heard as chums dash across riffle areas with three-quarters of their bodies exposed to the frigid air.

Eagles and ravens perch in nearby trees or sit on the gravel, finishing off left over carcasses pulled out of the water by foxes and coyotes. Flocks of mallards and mergansers can be seen in distant side channels seeking salmon eggs in the shallows. Last year a trapper came into the Delta Fish and Game office and reported that he passed near an eagle which made no effort to fly away. It turned out to be a young golden eagle nearly frozen; overnight it died, a consequence of the harsh conditions in this area. 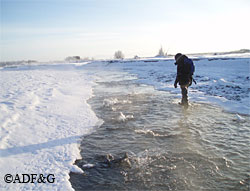 Spawning chum salmon are easily spotted in the many shallow braided channels of the Delta River.

Each November ADF&G counts the chum salmon in the Delta River. Employees in hip boots slip on the icy banks with counters in hand, bracing against the wind and exposing already cold hands to write down the numbers. To describe the escapement carcasses are examined for age, sex, and length. According to Commercial Fisheries Biologist Bonnie Borba, 14,055 chum salmon were counted in 2006.

Chum salmon (Oncorhynchus keta) are one of five species of salmon that enter the Yukon River to spawn. Two groups of chums come up, the first in mid-summer the other in the fall; it’s the later ones that like it cold. These chums generally come back from the ocean in their fourth year ranging in weight from seven to 18 pounds. They arrive in winter and manage to lay their eggs before Jack Frost encases them in ice.

Chum salmon are the most widely distributed of the Pacific salmon and the most abundant. Chum salmon are commercially important along the Yukon River and are also a traditional source of dried fish. They are known also as dog salmon, a name that seems to command little respect as to their importance. Or perhaps they are known this way because when they finally arrive at their spawning sites they are “dog tired”.

As chum salmon return to the river from the ocean, their pelagic coloration, dark blue with green back and slivery sides and bellies, begin to change to the “spawning dress” or freshwater markings. The chum salmon have the most vivid and multi-color marking of all the salmon species, a greenish color overlaid with pattern of black and maroon. Drastic physical changes occur as well, males develop hooked snouts and large teeth and the body becomes laterally compressed. It has been observed that chum salmon can change their colors and patterns rapidly to demonstrate aggressiveness as with the males competing with one another, or to be attractive, as with the females. As chum salmon begin to spawn, their fighting activities cause skin abrasions which are prone to fungal infections, some have their backs frozen solid from exposure, and all the while losing the brilliant colors in the process. Like a Pacific salmon, they die soon after they spawn. 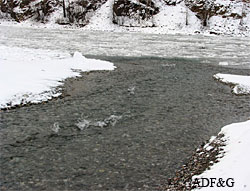 What possesses these fish to travel so far, only to arrive so late and face the brutal wind chill freezing their exposed backsides? The reward lies in the gravel. The lower two miles of the Delta River and other places nearby have upwelling water from the alluvial aquifers originating from the adjacent Alaska and Granite mountain ranges. The upwelling water provides salmon eggs deposited in these gravels warm temperatures and plenty of oxygen. The warmer gravel temperature allows the eggs to grow more rapidly to make up for the late arrival of the returning adults so they emerge in time for spring breakup. It is a critical period for these eggs to have suitable water flows, oxygen and temperature; the greatest amount of mortality in the salmon’s life cycle will likely occur during this egg-to-fry period.

Chum salmon are similar to the pink salmon (but different than other salmon species) in that there is no freshwater rearing time. Once they hatch out there is no time to lose, it’s a long way downriver.

Meanwhile throughout the winter on the Delta River, chum salmon carcasses provide a bounty for wildlife. In the spring, the young fish leaving the river are also ravished by rafts of birds and other species of fish such as burbot and Arctic grayling waiting at the mouth of the river, all part of the endless cycle.

The area surrounding the mouth of the Delta River has been nominated by ADF&G as a Critical Habitat Area for chum salmon. The Division of Commercial Fisheries, along with the Department of Natural Resources, Office of Habitat Management & Permitting, manages 547 acres where chum salmon spawn, and will ensure protection of this unique habitat.

James “Fronty” Parker is the Upper Tanana Area Management Biologist for the Alaska Department of Fish and Game. He’s based in Delta Junction, Alaska