Keeping Track of Deer
Biologists Look at Habitat and Animals 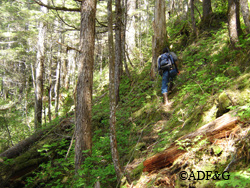 When it comes to monitoring Sitka black-tailed deer in the dense rainforests of Southeast Alaska, biologists look at deer sign as well as deer.

In late spring, deer pellet surveys are done in 24 watersheds in Southeast Alaska. As might be expected, the amount of deer poop in the forest is related to the number of deer. Biologists and Fish and Game technicians walk an established line through the forest, from the beach to about 1,500 feet in elevation, counting groups of deer pellets. Many of these transect lines are about a mile long, and generally there are three per watershed. Although numbers of pellet groups relate to numbers of deer in a watershed, the greatest value of pellet transects is insight into trends - changes in the population from year to year.

Transects are done on the ABC islands – Admiralty, Baranof and Chichagof Islands – as well as Douglas, Lincoln and Shelter Islands and Prince of Wales Island. 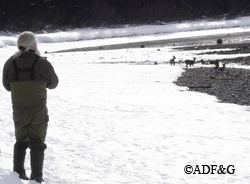 LaVern Beier watches a group of deer in Mud Bay, on Chichagof Island, part of a mortality survey in March. Riley Woodford photo.

Biologist Phil Mooney of Sitka manages deer on the ABC islands. He said surveys were done on foot in 17 areas of those islands this summer looking for fawn tracks. Crews searched the upper tidal flat areas; they covered about 33 miles and found fawn tracks in only 35 percent of the areas. Fawns found on Kruzof Island in early August were very small, looking much like they would in June of most years. Although this is only a thumbnail sketch of the area, surveys indicate that fewer fawns survived.

Mooney surveyed deer periodically throughout the winter along a specific route and rated their condition into one of seven classifications. He conducted mortality surveys in the spring at 28 sites to assess the extent of winterkill deer on or near beaches. In March, low-altitude flights were done over beaches and bays on Admiralty and Chichagof islands to check on deer herds. Personnel landed in about a dozen coves and bays to measure snow depth and examine live and dead deer. 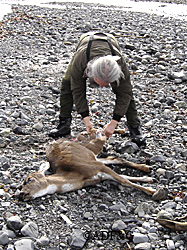 Biologists also look at the harvest data provided by hunters. Hunters also offer a wealth of information based on their experiences and observations in the field. Biologists also talk with pilots with years of experience and perspective flying in Southeast. Their observations, especially in the summer when deer are more visible in the alpine and in the winter when deer are on the beaches, provide insights into trends and conditions.